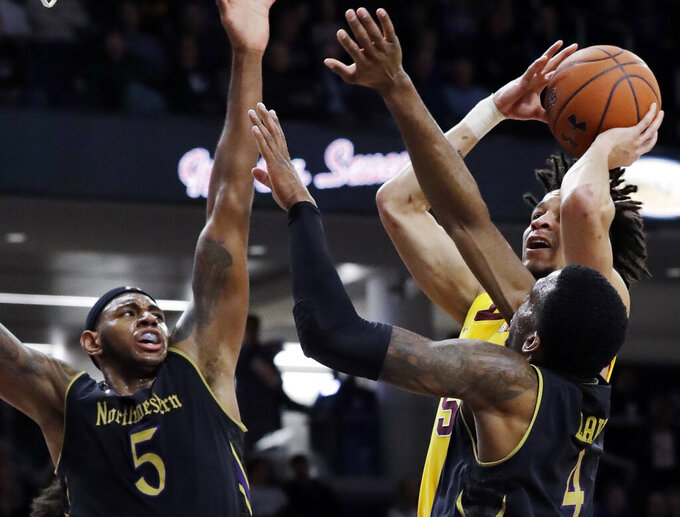 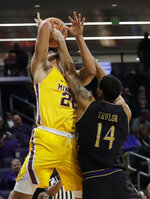 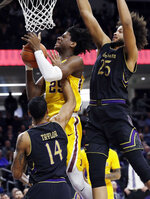 Coffey tied a career high with 32 points and set one with 12 rebounds to lead Minnesota to a 62-50 victory over Northwestern on Thursday night.

The Golden Gophers (18-11, 8-10 Big Ten) had dropped six of seven to jeopardize their NCAA Tournament hopes. But with Coffey leading the way, Minnesota got the win it needed and snapped a six-game road losing streak in the process.

"These last couple games are really important for Big Ten Tournament seeding and obviously a tournament bid," Coffey said. "We're trying to pick up as many as we can."

Minnesota has two tough games left — at home against No. 14 Purdue and at No. 17 Maryland — before the conference tournament begins.

Maybe this will help point the Gophers back toward the NCAA for the second time in three years.

Coffey played all 40 minutes while matching a high for points he set against Nebraska in December and easily surpassing his previous best of seven rebounds. The 6-foot-8 junior made 12 of 19 shots overall — 3 of 6 3-pointers. And it wasn't too hard to figure out why coach Richard Pitino kept him in the entire way.

"Why do you think? Thirty-two points. Twelve rebounds," Pitino said. "I'm not that bad of a coach. You've got to let him roll. He wasn't tired. He's reliable. He's durable. He's a talented, talented player."

The streak includes tight losses to Top 25 teams Iowa and Wisconsin. But Northwestern never really challenged in this one.

"Tonight, we weren't worthy of winning," coach Chris Collins said. "Minnesota outplayed us. I thought during this stretch, there were a handful of games, Wisconsin, I thought we put together a great effort, obviously the Iowa game on the road was one of our better efforts. For those guys not to be rewarded with winning, it can wear on you."

Dererk Pardon had 16 points and 13 rebounds. Vic Law scored 13, but the Wildcats continued to close in on their second straight losing season since making the NCAA for the first time.

They hoped returning to a renovated Welsh-Ryan Arena after playing home games last season in Rosemont, Ill., would restore the buzz surrounding the program. But with three games left, they will go into the Big Ten Tournament with a losing record.

Coffey scored 15 in the first half as Minnesota grabbed a 32-20 halftime lead. But he was about the only one clicking for either team in the early going.

Coffey had seven points during a 10-0 run, nailing a 3 from up top before Gabe Kalscheur buried one from the corner to make it 28-14 with 4:13 left in the half.

"Amir Coffey was phenomenal, from start to finish," Pitino said. "Offensively, defensively. Really good. I thought our bigs on the interior passed the ball well. Overall it was a good win. A good win on the road that we needed."

Minnesota: Coffey will need some help if Minnesota is going to beat Purdue and Maryland.

Northwestern: The Wildcats continue to sputter since beating Indiana at home on Jan. 22. They shot 34 percent overall and were 7 of 24 on 3-pointers.

"It felt good that our guys could perform with our backs against the wall and that we could definitely perform under pressure. We actually needed this win. We were able to get some momentum going into our next game on Tuesday." — Minnesota's Jordan Murphy.