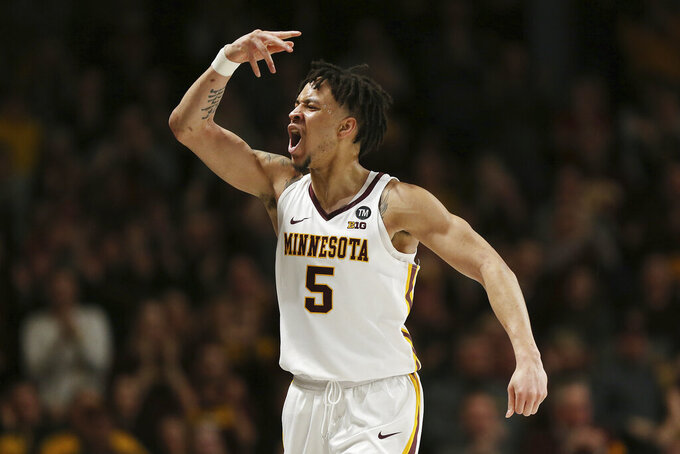 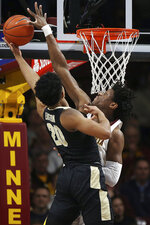 MINNEAPOLIS (AP) — After the students streamed onto the court in celebration of a critical victory over Purdue, the five seniors on Minnesota's roster each took turns with the microphone to thank the fans in another indelible moment from their last home game.

In a season marked by missed opportunities, the Gophers produced a winning finish and in the process denied the Boilermakers' bid for an outright Big Ten title.

Amir Coffey matched his career high with 32 points, making two free throws with 2.5 seconds left on Tuesday night to seal Minnesota's 73-69 victory over No. 11 Purdue and give the Gophers a big boost for an NCAA Tournament berth.

"When you're a young coach and you're trying to build, that's really, really important and very, very rewarding to see your guys experience that," said coach Richard Pitino, who promised his team a win in this game would get them in the tournament he's taken the Gophers to once in his first five years.

Carsen Edwards scored 22 points for Purdue (22-8, 15-4), but he needed 31 shots to get there and finished just 3 for 15 from 3-point range. The Boilermakers, who had their five-game winning streak broken and lost for only the second time in their last 15 games, fell into a three-way tie for first place in the conference with Michigan and Michigan State. The Wolverines and Spartans play each other this weekend, so the best the Boilermakers can do is tie for the regular-season title.

"Just kind of silly mistakes that we made at the end that we don't normally make. On the road it's always tough to close out games, and we were just unable to do it tonight," said Grady Eifert, who had 13 points and 14 rebounds.

Nojel Eastern had 12 points and 10 rebounds for the Boilermakers, who had a 21-9 edge in second-chance points but made only nine of 18 foul shots.

Jordan Murphy scored all 13 of his points in the first half to go with 14 rebounds for the Gophers (19-11, 9-10), providing his usual yeoman's effort underneath to help offset a season-long struggle with the 3-point shot. Fellow seniors Dupree McBrayer (10 points, four rebounds, four assists) and Matz Stockman (nine points, six rebounds, seven blocks) also played key roles.

Coffey, a junior point guard, was coming off his first career double-double with 31 points and 12 rebounds in a win Thursday at Northwestern. He chipped in stout defense on Edwards, too.

"I'm proud of him," Murphy said. "He helped send us off in one of the best ways we could go."

Ryan Cline scored 19 points for Purdue, making six of nine 3-pointers including a pair that came 23 seconds apart sandwiching a turnover by Minnesota and cut the lead to 64-61 with 3:06 left. The Gophers were up 68-61 after McBrayer made two free throws with 2:05 remaining, but Coffey missed three of four free throws on consecutive possessions before a 3-pointer by Edwards brought the Boilermakers to 71-69 with 5.2 seconds to go.

The Gophers nearly had the ball stolen on an errant inbound pass but maintained possession after a replay review. The next time they got the ball safely to Coffey for the final pair of foul shots.

"With their transition offense, our bad shots are like turnovers," Cline said, "and they're obviously producing points and they're getting to the rim."

The Gophers included in pregame warmups senior Jarvis Johnson, an acclaimed hometown recruit who was prevented from playing at all in college by a heart condition. McBrayer received an especially big ovation as he hugged his aunt, standing in for his late mother, Tayra McFarlane, who died on Dec. 3 of cancer .

Pitino, who also addressed the crowd after the game, predicted that Murphy, who's the second-leading rebounder in Big Ten history and in sixth place and climbing on the program's career scoring list, would eventually have his No. 3 jersey retired.

The Boilermakers have one of the most efficient offenses in the country, but the Gophers gave them plenty of trouble, particularly in the paint. Matt Haarms, the 7-foot-3 sophomore who brought the best field goal percentage (64.5) in the Big Ten into the game, missed seven of his eight shots and finished with just three points.

Stockman played a big part. The 7-foot transfer from Louisville, wrapping up his only season at Minnesota, ably assumed a much larger role with backup big man Eric Curry lost to a foot injury.

"I figured if I just stayed physical with Haarms throughout the game, it would take him out of his game," Stockman said.

Purdue: The Boilermakers, who had won 47 of their last 57 regular-season Big Ten games, received zero points from their bench players.

"If you watched the game," coach Matt Painter lamented, "we couldn't play them."