For college basketball, a season begins on the brink 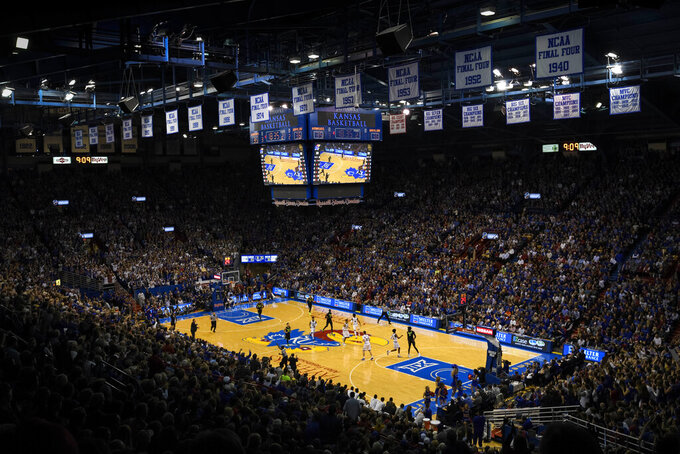 FILE - In this Wednesday, Feb. 1, 2017, file photo, the Kansas Jayhawks host the Baylor Bears during an NCAA college basketball game at Allen Fieldhouse in Lawrence, Kan. For coaches, lawyers and other leaders in college basketball, the approach of the upcoming 2019-2020 season has been nothing like business as usual. The storied Jayhawks program faces serious questions about whether it will remain eligible for the postseason come March 2020 in the wake of NCAA allegations of recruiting fraud that could sink both the program and its Hall of Fame coach, Bill Self. (AP Photo/Reed Hoffmann, File)

For coaches and other leaders in college basketball, the approach of the upcoming season has been nothing like business as usual.

Not in Indianapolis, where lawyers at the NCAA are busy trying to circumvent a newly passed law that threatens the foundation of an enterprise built on a simple commandment: thou shall not pay players.

Not in California, where that law was passed, and where the clock is now ticking: It goes into effect in 2023 and has an outside chance of leaving the state's biggest colleges, including UCLA and Stanford, on the outside looking in at March Madness.

And certainly not in Kansas, where the storied Jayhawks face serious questions about whether they will remain eligible come March in the wake of NCAA allegations of recruiting fraud that could sink both the program and its Hall of Fame coach, Bill Self.

"Absolutely, Kansas will always prevail," Self said last week. "I'd like to think I will as well."

These two issues will serve as background noise for the upcoming season — not quiet enough to completely be forgotten, but almost certainly not loud enough to drown out the frenzy the sport produces during its three-week title chase at the end.

Trouble is, Kansas could have company. North Carolina State got an NCAA notice in July, and Arizona, Auburn, Creighton, Louisville, LSU and USC have been under scrutiny in the wake of the FBI's investigations and subsequent court cases detailing back-channel deals between shoe companies, agents and recruits.

The Kansas scenario, involving payments to recruits Billy Preston and Silvio De Sousa, could have the most immediate repercussions, in large part because the NCAA alleges Self knew what was going on (if he didn't, it could make an even stronger case for the dreaded "lack of institutional control" allegation). Kansas is fighting the charges and Self has vowed he "won't cut and run" but the No. 3 Jayhawks' eligibility for the postseason is in flux as the case plays out over the season.

It's hardly the first time a major program will play a season under the shadow of an investigation (See North Carolina, which won the national title in 2017 while its athletic program was mired in a long-running academic-fraud case).

What makes this season different, however, are the undercurrents of change rippling across the sport. The possibilities bring with them the fantastical thought that, if things really change and players can make some money, maybe they won't be so dependent on under-the-table payments, and maybe the programs they play for won't have to break so many rules to sign them.

But it will take time.

California's Fair Pay to Play Act does not call on colleges to directly pay players — that would be the most straightforward route to turning the NCAA into a pro league — but does allow them to hire agents and sign endorsement deals and make money using their names and likenesses.

Chances are, only the top of the top would see big benefits from this act. And the odds of it going into effect as it's written in 2023 are remote. The NCAA is looking at changes of its own that would ease the restrictions on athlete compensation, though it also has not ruled out a court fight in California. There is precedent for overturning a law that impacts only one state that is part of a multi-state organization.

Lawmakers in other states are watching closely. Some have drafted similar legislation and members of Congress are jumping on the bandwagon, too.

All of which has Kentucky's lightning-rod coach, John Calipari, shaking his head.

Calipari has fashioned his reputation as a coach with the players' best interest in mind, saying his mission is to play by the NCAA rules, then move his top talent into the running for NBA millions as soon as practically possible.

He is also for anything that would help them cash in while they are still in college.

But when he looks at the potential for different laws in different states, for multiple lawsuits and the NCAA weighing in, "the tea leaves tell me there's one place this is going to get solved, and it's Congress."

For now, he will do what Self and every other coach will do while the seas of change are swirling around them this season.

"There are all kinds of consequences that have to be addressed," Calipari said, "and I'm coaching my team."