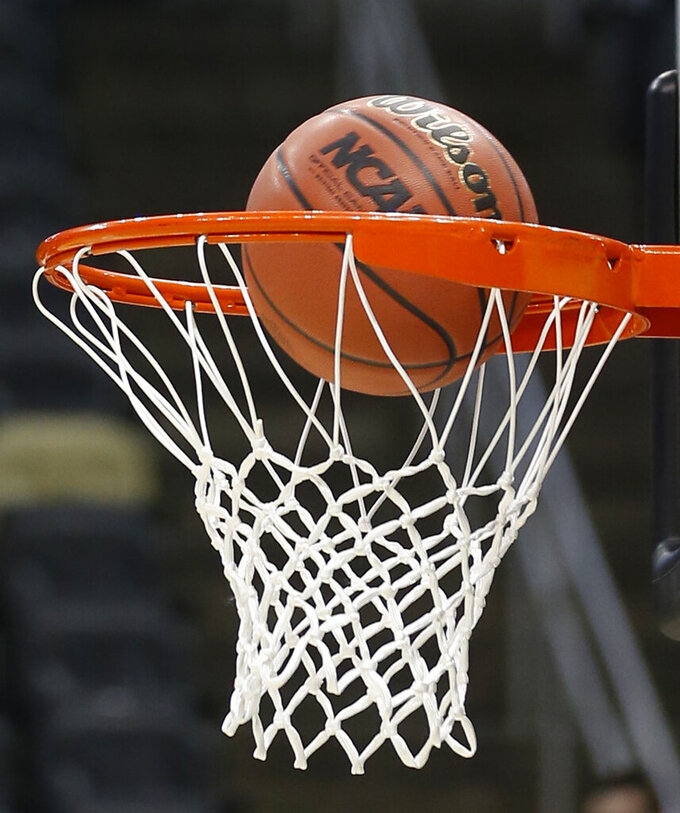 FILE - In this March 18, 2015, file photo, a basketball with the NCAA logo goes in on a shot by Northeastern during practice at the NCAA college basketball tournament in Pittsburgh. Coaches did the best they could to prepare for the big moment, yet still find themselves in a scramble once it actually happened. The NCAA announced last month that the season would begin on Nov. 25 and teams are still trying to fill all the holes in their schedules. (AP Photo/Keith Srakocic, File)

College coaches endured a tense time waiting for the NCAA to green light the 2020-21 basketball season.

They knew there was a window the NCAA was looking at to start, likely sometime in late November or early December. They just didn't have a date. So they did the best they could to prepare for the big moment, yet still found themselves in a scramble once it actually happened.

Even now, six weeks before tipoff, teams are struggling to fill out schedules as the clock keeps ticking.

“We were trading a lot of phone calls, trying to come up with the best solutions," said Anthony Ruta, director of basketball operations under Arkansas coach Eric Musselman. “You need time because you're trying to juggle a bunch of different things. You're trying to check a lot of boxes along the way without compromising yourself in other areas.”

College football ended up with a scattershot plan for starting its season, leaving it up to the various conferences. As a result, some conferences are already playing while others, like the Pac-12 and Big Ten, are still waiting for their seasons to kick off.

The NCAA took a more unified approach to the basketball season, saying it would set a start date for all teams in all conferences.

Word came down in mid-September, when the NCAA said the season will begin on Nov. 25.

Then the scramble began.

Coaches kept in touch with opponents on their original schedules to make sure they were both on the same page. A multitude of factors had to be sifted through.

Because the season was originally slated to begin in early November, the later start date meant several games on the schedule would have to be pushed to another day or eliminated. Many teams don't want to travel long distances during a pandemic, so finding regional opponents became a priority.

Teams also had to sort through contracts with previously scheduled opponents and work around uncertainties as leagues across the country try to work out conference schedules.

“The problem is we already had the schedule,” West Virginia coach Bob Huggins said. "(Director of basketball operations Josh Eilert) had done a great job, had us a great nonconference schedule, and then we had to just about totally blow it up and start all over again. It's been as tough as I can remember in 43 years."

One of those, the Maui Invitational, was moved to Asheville, North Carolina. The Battle 4 Atlantis in the Bahamas was canceled and several teams slated to play there are headed to South Dakota instead. The Cancun Challenge was moved from Mexico to Florida and the Empire Classic from Madison Square Garden to the Mohegan Sun in Connecticut.

Many teams are opting to play in smaller events, like the four-team Little Apple Classic at Kansas State and the Champions Classic in Orlando.

The rest of the schedules will be a mix of home and away games. The safety of players and coaches is the top priority, so many programs are looking at nearby opponents so they can travel by bus instead of going through an airport and getting on a plane.

There's also the issue of testing.

Every state and conference seems to have different standards and individual schools have a variety of testing capabilities, some based on financial restraints. Finding opponents with similar testing standards, or who are at least willing to adhere to possibly more stringent practices, became another piece of the scheduling puzzle.

“It has been frustrating because we don’t know the rules of the game," Michigan State coach Tom Izzo said. "If we bring in a nonconference team, are they testing the same way, are they following the protocol that the Big Ten would accept? We’re starting to put together a schedule, maybe here and maybe there.”

It's been nearly a month since the NCAA's start date announcement. The scramble is still ongoing.

At least coaches know there will be a a season and when it will start after months of waiting.

“It really has given us some clarity going forward,” Villanova coach Jay Wright said. "It’s taken a little bit of a workload off us because we were all prepared for anything. Now we’ve got some parameters to work with.”