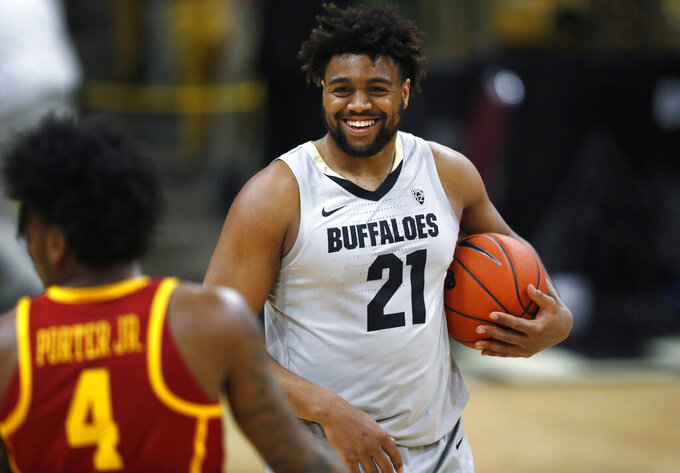 Colorado forward Evan Battey, back, smiles as he holds the ball as time runs out in the second half of an NCAA college basketball game as USC guard Kevin Porter Jr. heads off the court Saturday, March 9, 2019, in Boulder, Colo. Colorado won 78-67. (AP Photo/David Zalubowski)

BOULDER, Colo. (AP) — The Colorado Buffaloes will take both momentum and the mantle as the Pac-12's hottest team into the league's tournament next week in Las Vegas.

Freshman Evan Battey and sophomore Tyler Bey saw to that.

Battey scored a season-best 21 points and Bey posted his fifth straight double-double with 17 points and 11 rebounds and he stifled USC's leading scorer Bennie Boatwright in a 78-67 win over the USC Trojans on Saturday.

That's the best in the Pac-12 and the best for a Buffaloes team since 1961-62, when they won nine of their last 10 regular season games.

That kind of late-season run used to mean something to the NCAA tournament selection committee; now it means more in terms of the momentum a team can take into its conference tournament.

"Now, people used to look at, 'Hey, how's the team playing now? How good are they today?'" Colorado coach Tad Boyle said. "Nobody talks about that anymore. It used to be, your last 10, how'd you do? That's not even in the conversation. Who'd you beat? Who'd you beat in November? That's the world we live in. I'm not going to change it.

"All I know is we're playing good basketball as we head to Vegas," Boyle added. "We have a conference tournament, which 12 teams have an opportunity to go and win. Somebody's going to come out of there with an automatic bid, and it could be anybody this year."

The Trojans (15-16, 8-10) limp into the Pac-12 tournament on a four-game skid after Bey throttled Boatwright, who was held to 9 points — half of his average — before fouling out with three minutes remaining and USC trailing by six points. Boatwright's streak of scoring in double digits ended at 20 games.

Three of his teammates finished with four fouls as did two Colorado players.

Nick Rakocevic led USC with 17 points and Jonah Mathews scored 13, but the Trojans' hopes of an upset were dashed when they went cold down the stretch and were outscored 14-7 in the final 4½ minutes.

Despite inferior size inside, the Buffs outscored the Trojans 46-28 in the paint.

"Both our big men were in foul trouble the whole night," USC coach Andy Enfield said. "We got dominated in the paint. Tyler Bey had 17 and 11 and Battey had 21 points in the lane, all in the paint. When you can't guard the rim it's going to be a long night. We have to get tougher and prevent them from catching the ball so deep. Until we do that it's going to be a tough go."

Enfield complained that two of Boatwright's five fouls were offensive.

"There's some flopping going on," charged Enfield. "It's tough when they allow all that contact with their bigs to post our guys up, they had their bodies on our bigs all night and then they call some cheap flops. It's hard on our guys, because it put our guys on the bench. Bennie played less than half the game tonight. It was difficult for us in our rotation tonight."

USC: The Trojans had a solid first half despite a drought from leading scorer Boatwright, who made just 1 of 6 shots while playing just 8½ first-half minutes. They led by as many as 12 when Elijah Weaver and Kevin Porter Jr. sank back-to-back 3s that gave the Trojans their biggest lead of the first half at 33-21. The Trojans led 37-30 at the half.

Colorado: The Buffs won their third straight and swept the Trojans, whom they beat 69-65 in Los Angeles on Feb. 9. ... The Buffs began conference play 2-6 yet finished above .500 for the sixth time in nine seasons. ... With the win, Tad Boyle moves past Ricardo Patton for No. 2 on CU's all-time victories list with 185.

GIVE ME SOME LOVIN'

The Buffaloes had four players with at least three assists just twice all season, against UCLA on Thursday night and USC on Saturday.

"I think that's a testament to our love of one another," Battey said. "We love each other so much. When we pass the ball to one another, we want to see each other succeed. So, just sharing a ball out of love."

USC and Colorado: Play in the Pac-12 tournament that begins Wednesday in Las Vegas.