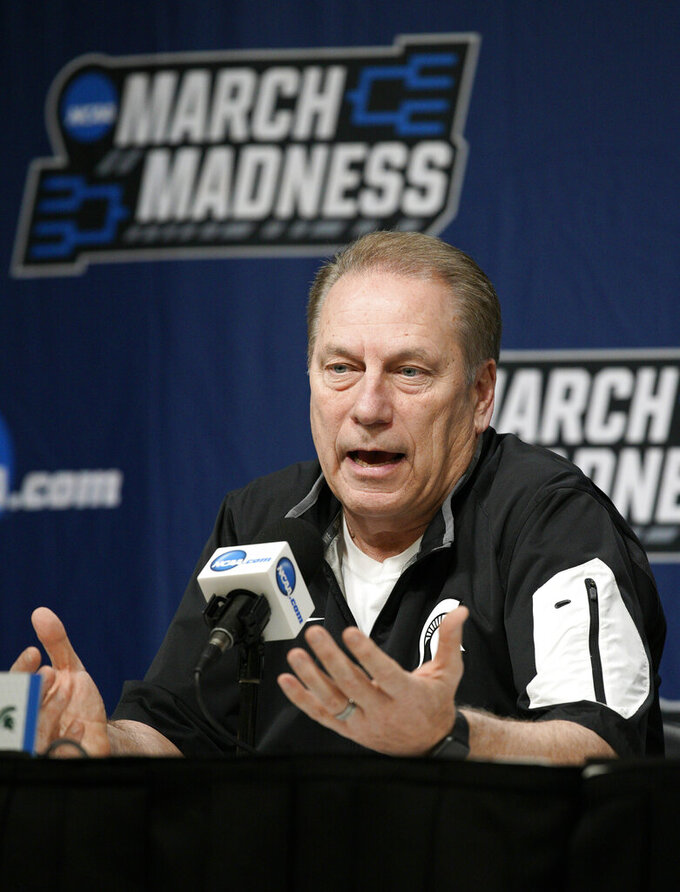 If this was Tom Izzo's One Shining Moment, it was downright embarrassing.

Of course, the Michigan State coach felt no shame.

Like so many of his brethren, he considers it well within his coaching rights to berate a young man in front of the whole world.

He's got plenty of apologists, too.

Izzo's former players sprang to his defense (which sounds a bit like a hoops version of Stockholm Syndrome). Georgia coach Tom Crean, who was on the Michigan State staff two decades ago, said he actually misses those glorious days when Izzo chewed him out. And, of course, others turned to that well-worn gripe that any complaints about Izzo's abrasive coaching style are merely further evidence of how soft we've gotten as a country.

"Tom Izzo makes everyone around him accountable and responsible," Crean wrote Friday on Twitter. "I've been gone 20 years from his staff and there is many a day I wish he'd tell and yell at me again. It always made me better."

While there's certainly room in college sports for some hard-nosed coaching, there's no excuse for what Izzo did in the opening round of the NCAA Tournament. With the No. 2-seeded Spartans locked in a surprisingly tight game with No. 15 seed Bradley, Izzo suddenly went after freshman Aaron Henry during a timeout early in the second half.

The 64-year-old coach stormed onto the court with veins bulging and his right fist balled up. He screamed at the youngster and pointed a finger right in his face. Henry threw up his arms, as if he didn't quite know what was going on. Junior guard Cassius Winston tried to be the adult in the room, putting both arms on Izzo's shoulders to gently guide him away from Henry.

That wasn't the end of it.

After everyone huddled up to talk things over, Izzo began screaming at Henry again and actually lunged toward the player. This time, it was left to senior guard Matt McQuaid to be the grown-up. He pulled Izzo back into his chair and motioned for Henry to calm down, as well.

Without a hint of regret, Izzo explained why he got so angry.

"There were some things Aaron didn't do a very good job of," the coach said. "I did get after him. He did respond. He did hit a couple of big buckets. He did make some big free throws. But that's not good enough. This is one-and-done time." Continuing the process of throwing his player totally under the bus, Izzo added, "If it's 'my bad' because I decided to jog back instead of sprint back (on defense), then it is your bad. And you're going to hear about it."

When pressed on the issue, he essentially blamed the media for making such a big deal about a little harmless public shaming.

"I get a kick out of you guys (when you) get after somebody because you're trying to hold them accountable," Izzo said. "I don't know what kind of business you're in, but I tell you what: If I was the head of a newspaper and you didn't do your job, you'd be held accountable. That's the way it is."

It's one thing to be held accountable.

It's a whole different thing to be humiliated in public for making a mistake.

Frankly, I know of no one in journalism — or any profession, for that matter — who would put up with that sort of treatment.

College coaches have never seen in that way.

That's for everyone else.

Not surprisingly, they circled the wagons around Izzo, as they do anytime someone challenges their often-sleazy profession.

"He's tough on them. He should be tough on them," said Minnesota coach Richard Pitino, whose team will play Izzo's Spartans in the second round Saturday. "I know his players love playing for him."

From Adolph Rupp to Bobby Knight to guys like Izzo, coaches have always felt perfectly comfortable treating their players like trash, all under the tough-love guise that it will make them better in life. Many players are conditioned to accept that sort of treatment, and even look back on it fondly when their school days are over.

"Our best thing to handle that is we respond on the court. Aaron had the key bucket and he made those two free throws. A lot of people don't realize when coach challenges us, it's not like he wants us to fail or he wants to get under our skin. He wants us to succeed."

That's not the way to do it.

Paul Newberry is a sports columnist for The Associated Press. Write to him at pnewberry@ap.org or at www.twitter.com/pnewberry1963 His work can be found at https://apnews.com/search/paul%20newberry

By Dave Skretta 4 hrs ago
By Hank Kurz Jr. 7 hrs ago
17 hrs ago
By Anthony Anderson 18 hrs ago
By Michael Marot 19 hrs ago