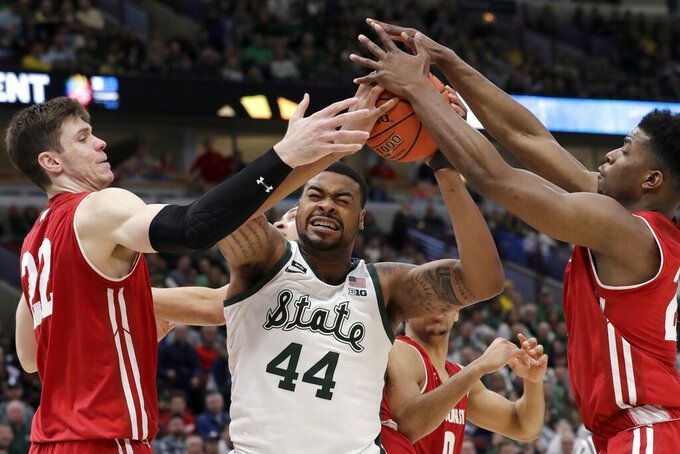 Michigan State's Nick Ward (44) battles for a rebound against Wisconsin's Ethan Happ (22) and Aleem Ford (2) during the second half of an NCAA college basketball game in the semifinals of the Big Ten Conference tournament, Saturday, March 16, 2019, in Chicago. Michigan State won 67-55. (AP Photo/Nam Y. Huh)

CHICAGO (AP) — In a story March 16 about a Big Ten Tournament semifinal between Wisconsin and Michigan State, The Associated Press reported erroneously that Kenny Goins missed a dunk in the closing seconds of the first half. It was Xavier Tillman who missed the dunk.

A corrected version of the story is below:

CHICAGO (AP) — Once Cassius Winston and Kenny Goins powered Michigan State to a fast start, Wisconsin was in deep trouble.

Tough to chase down the Spartans in March.

Winston scored 21 points and Goins had 13 points and 12 rebounds, helping No. 6 Michigan State beat No. 19 Wisconsin 67-55 in the Big Ten Tournament semifinals on Saturday.

Goins, Aaron Henry and Xavier Tillman led a dominant rebounding effort as the Spartans earned their seventh consecutive win in their series against the Badgers. Tillman finished with 17 points and seven rebounds, and Henry grabbed a career-high 11 boards to power Michigan State to a 44-30 advantage on the glass.

"All in all, a gritty performance by us," coach Tom Izzo said.

Winston shook out his left ankle a bit after he accidentally kicked Wisconsin guard Brad Davison with about 4 minutes left in the first half. But the Big Ten Player of the Year stayed in the game and showed no sign of trouble while going 9 for 17 from the field and passing for six assists.

Winston said he was fine, but Izzo made it sound as if it was tenuous for a bit.

"Cassius was on adrenaline, he's been on adrenaline for a while," Izzo said. "At halftime, I really didn't know what was going to happen. So adrenaline kicked in and it got him through parts of another half."

The top-seeded Spartans (27-6) earned their ninth win in 10 games and will go for their sixth Big Ten tourney title on Sunday against Michigan. The 10th-ranked Wolverines advanced with a 76-49 victory over Minnesota.

"Just another chance at a championship. That's what we play for here," Winston said. "That's what it's all about at Michigan State."

Wisconsin star Ethan Happ bounced back nicely from a shaky performance in the quarterfinals against Nebraska, finishing with 20 points, six rebounds and four blocked shots. Kobe King had 13 points, but the Badgers (23-10) shot just 35 percent from the field.

Nate Reuvers, who had 14 points in the victory over the Cornhuskers, was 0 for 7 from the field and failed to score. D'Mitrik Trice had seven points on 3-for-10 shooting before fouling out with about a minute left.

"For the most part, I think we got a lot of open looks," Trice said. "I thought we passed it around really well. It just didn't fall."

Especially at the beginning.

While the Badgers stumbled at the start, the 6-foot-7 Goins swished his first three 3-point attempts in the first 6 minutes of the game. Tillman made a foul shot and then converted a three-point play to give the Spartans a 27-10 lead with 7:42 left in the first half.

Wisconsin closed to 35-27 at the break, helped by a missed dunk by Tillman in the final seconds. The Badgers challenged the Spartans at a few points down the stretch, but Winston and Goins had an answer every time.

After Happ's driving layup got Wisconsin within seven early in the second half, Goins found Tillman under the basket for a big jam. The Badgers closed to 47-41 on Khalil Iverson's three-point play before Winston converted a layup and Goins rattled home a 3-pointer to help run the lead back out to nine with 9:12 to go.

"We could never overcome the start and couldn't get back after they got hot at the beginning," coach Greg Gard said.

Michigan State forward Nick Ward was hampered by foul trouble in his second game back after being sidelined by a broken left hand. He finished with two points and three rebounds in a little less than 11 minutes.

"I'm pleased where Nick is coming," Izzo said. "I really was hoping to play him 16, 18 minutes today. But he'll get his chance. We have another game to play."

Wisconsin: Happ looked like his usual self, but the Badgers were shut out for more than seven minutes during one key stretch in the second half. They also managed just three fast-break points.

Michigan State: Izzo lamented Michigan State's 15 turnovers and worried about his substitution patterns, but there was a lot to like, too. The Spartans had 18 assists on 23 baskets.

Wisconsin: Heads home to figure out where it's going for the NCAA Tournament.

Michigan State: Tries for a third win against Michigan this season. The Spartans beat the Wolverines 77-70 on Feb. 24 and 75-63 last Saturday.