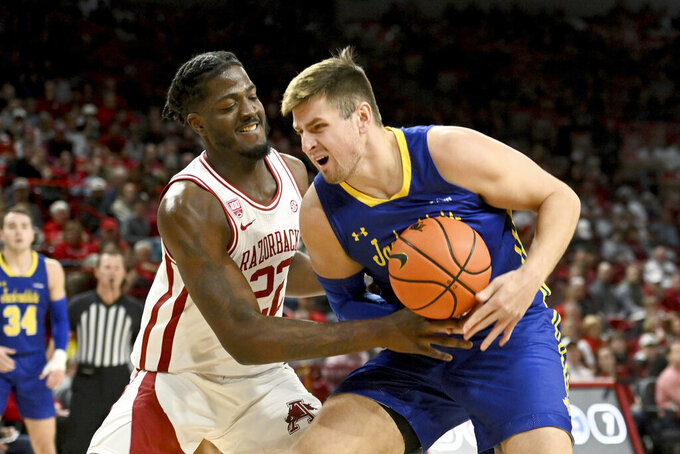 Arkansas forward Makhel Mitchell (22) knocks the ball away from South Dakota State forward Luke Appel (13) as he drives to the basket during the first half of an NCAA college basketball game Wednesday, Nov. 16, 2022, in Fayetteville, Ark. (AP Photo/Michael Woods)

Arkansas (3-0) used a 10-2 run over the last two minutes of the first half to build a double-digit halftime lead, an 11-0 run early in the second to build it to 22 and another 10-0 run midway through the second half to cement its control of the game.

The Jackrabbits (2-2), after defeating St. Bonaventure on Tuesday, could not slow down the Razorbacks.

"Really happy with how we’ve defended," Arkansas coach Eric Musselman said. "I think when we do drills in practice, they do a really good job surprisingly. I thought maybe this would have to evolve. But the buy-in and paying attention in drills, really high-level, maybe as much as any team that we’ve had."

Devo Davis scored 13 points for the Razorbacks and Jordan Walsh added 10 more in his 15 minutes. Trevon Brazile had a double-double off the bench, registering 13 points and 10 rebounds.

“Thank goodness for Ricky and (Brazile),” Musselman said. “Those guys are both playing phenomenal. To think you can bring a guy off the bench and he can have the impact that he has. He’s a starter.”

Arkansas has won all three of its games so far without five-star recruit and likely lottery pick Nick Smith Jr. Musselman said earlier in the week that Smith has not practiced and was considered day-to-day.

Arkansas celebrated its 500th game inside Bud Walton Arena during the game. Musselman sported a custom pair of shoes on the sideline to mark the occasion, complete with the number in bold, black font. The Razorbacks are 409-91 all-time inside the arena following the win.

Walsh, a freshman, left the game with 15:10 left in the second half after suffering a leg injury and did not return. He was one of three five-star recruits the Razorbacks signed in the offseason. The other players are Smith and guard Anthony Black.

“For his productivity in those 15 minutes, that’s what we need from him,” Musselman said. “We need Jordan to get healthy for sure. We can’t afford anybody else.”

Arkansas’ athleticism has proven too much for its three non-power-conference opponents this year, even if the Razorbacks’ 20 turnovers frustrated coach Eric Musselman on the sideline.

Arkansas: Off until Monday when it plays Louisville in its opening game of the Maui Invitational.