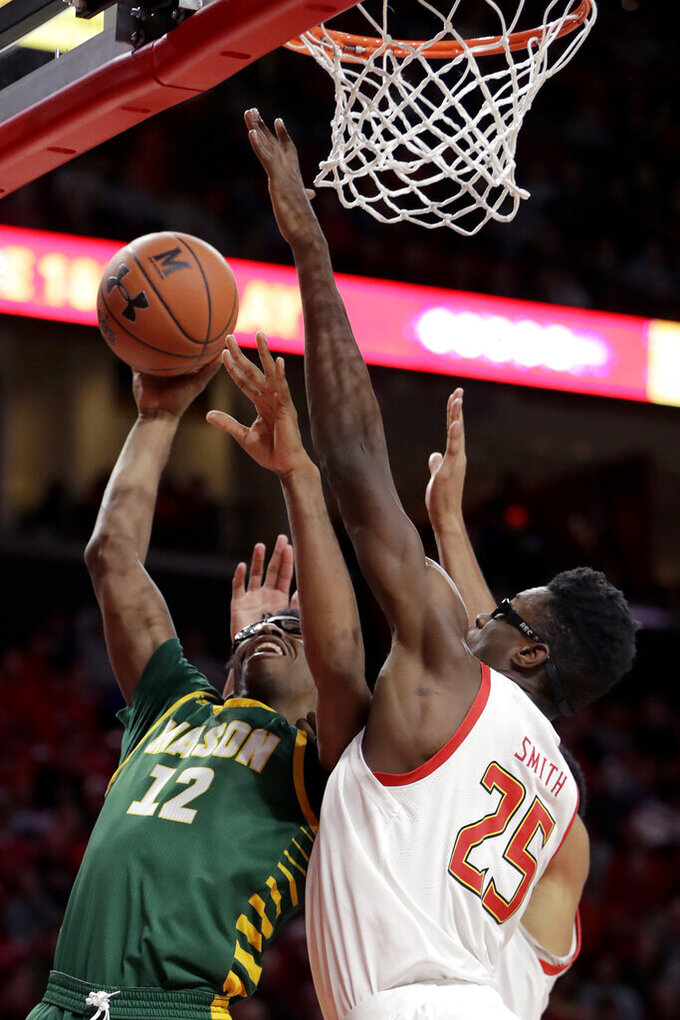 COLLEGE PARK, Md. (AP) — Playing at home against lesser competition over the first five games of the season, No. 6 Maryland didn’t necessarily have to jump out to a big lead to win.

After trailing George Mason for much of the first half, Maryland finally righted itself and remained unbeaten with an 86-63 victory Friday night.

It all ended well, but coach Mark Turgeon was justifiably uneasy about the way this game — and several before it — started.

“Am I concerned? Yeah,” he said. “Guys from the neck up have to lock in, and I think that will help us moving forward.”

Maryland won each of its opening five games by at least 18 points. The last time the Terps won five in a row by double figures was in the 1998-99 season.

So, although the slow start has not yet become an issue, Turgeon hopes the flaw will be corrected next week when the team takes to the road for the Orlando Invitational.

“Maybe it will take getting away from (home), going down to Orlando, being challenged in a different way, not having the home crowd,” Turgeon said.

The Terrapins closed the first half with a flourish to go up by 12 and coasted to the finish against the Patriots, who went 8 for 30 (27 percent) from the floor after halftime.

But what happened before that big run?

“It's just our energy,” Wiggins said. “Coming out in the first half, we've got to have a little bit more energy, be mentally prepared. Once the game gets going, once we get into a flow, we lock in and we make adjustments.”

Smith was held scoreless over the first 16 minutes but ended up with his third double-double of the season. Freshman Makhi Mitchell had 12 points and eight rebounds — all in the second half.

AJ Wilson scored 19 for the Patriots (5-1), who were off to the most successful start in school history.

“For 12 or 14 or 15 minutes, I thought we'd played really, really well,” coach Dave Paulsen said. “And then things kind of unraveled at the end of the first half.”

George Mason’s campus in Fairfax, Virginia, is only 34 miles south of College Park. But the difference in the programs can be measured by Maryland’s 9-0 record against the Patriots.

Maryland trailed by as many as seven points early and was down 29-24 before turning it around with a flurry of shots from a variety of spots.

Cowan and Wiggins each connected from beyond the arc, Smith popped a 15-footer and Cowan, Eric Ayala and Smith contributed layups. Maryland also made five free throws during the pivotal surge, which made it 43-31 at the break.

“We were able to guard, get out in transition,” Cowan said. “Early in the game, we weren't as locked in as we were supposed to be. A lot of mental mistakes.”

George Mason: The Patriots have too many injuries to keep pace with the deep Terrapins, but this squad does appear to have enough talent to make some noise in the Atlantic-10. “We're still trying to find ourselves,” Paulsen said. “At times we did a great job. And at times we rushed things, were sloppy with the ball. At times we got exactly the shot we wanted, just missed them.”

Maryland: Playing at home against overmatched foes wasn’t much of a challenge for the Terps, who should receive more of a test in Orlando.

The Patriots played without senior guard Justin Kier, who will miss the first few weeks of the season with a stress fracture in his right foot. Kier and senior guard Ian Boyd, who’s out for the year after undergoing wrist surgery, have combined for 1,632 points and 799 rebounds. In addition, freshman Bahaide Haidara (wrist) is out 4-6 weeks.

Maryland gets a five-day break before facing Temple on Thanksgiving morning in Orlando, Florida.