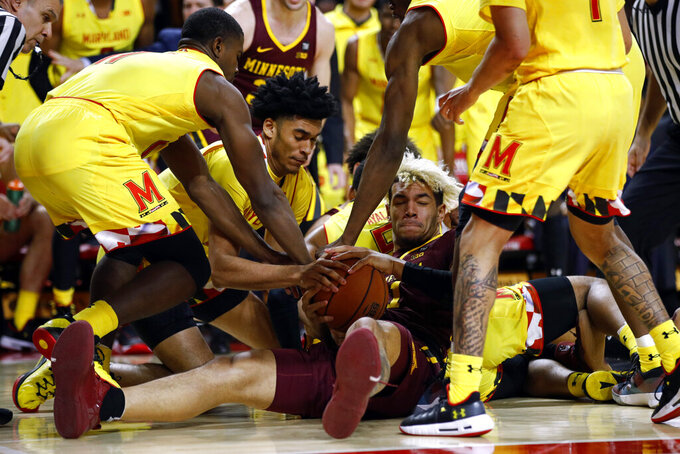 Minnesota forward Jarvis Omersa, bottom, tries to keep possession as he is surrounded by Maryland players in the first half of an NCAA college basketball game, Friday, March 8, 2019, in College Park, Md. (AP Photo/Patrick Semansky) 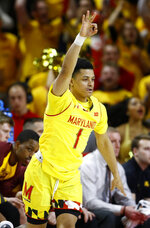 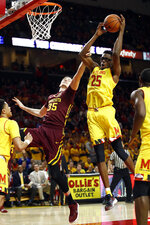 COLLEGE PARK, Md. (AP) — If Maryland was feeling pressured to snap a two-game losing streak, it sure didn't show prior to the opening tipoff against Minnesota.

The Terrapins completed their warmup session by gathering in the lane to dance to the hip-hop music blaring from the loudspeakers. They laughed and joked with the team's two upperclassmen on Senior Night, and jumped for joy when senior Ivan Bender dropped to one knee and proposed to his girlfriend.

And then, No. 24 Maryland kept the good times rolling, completing the regular season with a feel-good 69-60 victory Friday night.

Anthony Cowan Jr. scored 21 points and Jalen Smith had 19 points and 11 rebounds for the Terrapins. They were coming off a lopsided loss at Penn State and their lone Big Ten defeat at home, versus Michigan.

"We talked about having fun, but you never know if kids are going to relax or not," coach Mark Turgeon said. "We were a little uptight Sunday in that (Michigan) game."

There was no sign of nervousness against Minnesota. The Terrapins (22-9, 13-7) led by 12 at halftime, stretched the margin to 19 in the opening three minutes of the second half and went up 54-32 with 13 minutes left.

"We talked about when you go on the road, you've got to take good shots and you can't turn the ball over," coach Richard Pitino said. "We didn't do both of those in the first half."

Bruno Fernando had 11 points and 11 rebounds for Maryland and Smith, a lanky 6-foot-10 freshman, just missed matching his career high of 21 points — set against Minnesota in 82-67 victory Jan 8.

Limited to 10 points against Michigan, Cowan topped that with a 12-point first half against Minnesota. The junior guard finished with a team-high five assists and played 37 minutes.

Asked what made the night special, Cowan replied, "Just seeing everybody playing together. Everybody smiling. Everybody just playing with heart, playing with effort. You can't really ask for much more than that."

Minnesota had more turnovers (8) than baskets (7) in the first half and was 2 for 14 from inside the arc.

The Terrapins led 9-6 before Smith drilled successive 3-pointers to ignite an 18-7 run. Smith added a dunk during the surge and Cowan capped it with a 3 from the top of the key.

Smith started the second half with two free throws and Cowan made a layup to launch a 9-2 spurt that made it 43-24.

Minnesota: The Golden Gophers are a different team on the road, a problem that is not unique in the Big Ten. Minnesota finished 13-3 at home and 2-9 on the road, including 2-8 in the conference.

Maryland: The Terrapins desperately needed a blowout victory to erase the sting of the two games that preceded it. Turgeon can only hope this serves as a confidence boost heading into the Big Ten Tournament.

Coffey scored a combined 63 points in Minnesota's previous two games, helping the Golden Gophers beat Northwestern and Purdue. In this one, however, he went 8 for 17 from the floor and struggled before scoring 17 over the final 9:34.

"He doesn't need to have to score 30 points for us to be a good offensive team," Pitino said. "But in the second half, he was pretty darn good."

With only two upperclassmen on the squad, Senior Night was expected to be rather uneventful.

Bender rewrote the script by proposing to his girlfriend.

Both teams open play Thursday in the Big Ten Tournament at the United Center in Chicago.