Creighton center out after knee injury in 1st-round victory 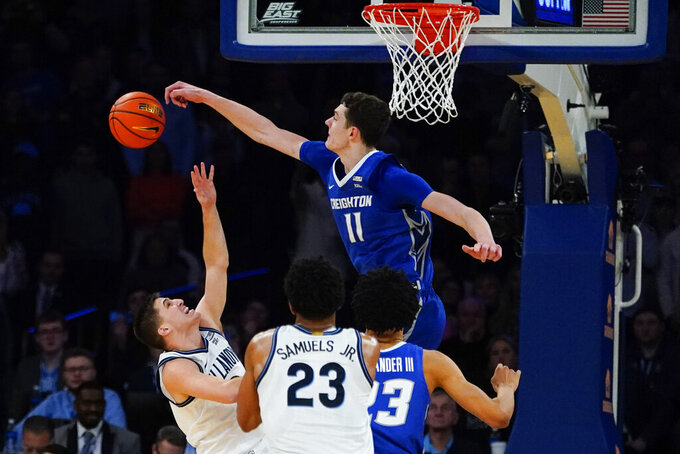 Creighton's Ryan Kalkbrenner (11) blocks a shot by Villanova's Collin Gillespie during the second half of an NCAA college basketball game in the final of the Big East conference tournament Saturday, March 12, 2022, in New York. (AP Photo/Frank Franklin II)

FORT WORTH, Texas (AP) — Creighton sophomore center Ryan Kalkbrenner will miss the rest of the NCAA Tournament, though coach Greg McDermott said the knee injury wasn't as significant as had been feared after he got hurt in the Bluejays' first-round win.

McDermott said Friday that Kalkbrenner had some damage in his left knee, but that it was not an ACL injury and will not require surgery. The Big East defensive player of the year will still need two to three months to recover from the injury.

Ninth-seeded Creighton will try to get to the Sweet 16 for the second year in a row when it plays top-seeded Kansas in a second-round Midwest Regional game Saturday.

Kalkbrenner had 16 points and 10 rebounds before getting hurt in overtime against San Diego State on Thursday night. He had initially tried to get up, but then fell back on the floor and and was clearly in pain when he grabbed his knee. He put no weight on his left leg when he was helped off the court.

McDermott said Kalkbrenner is expected to be able to work out with his teammates this summer.