Creighton out to make better memory at Big East Tournament 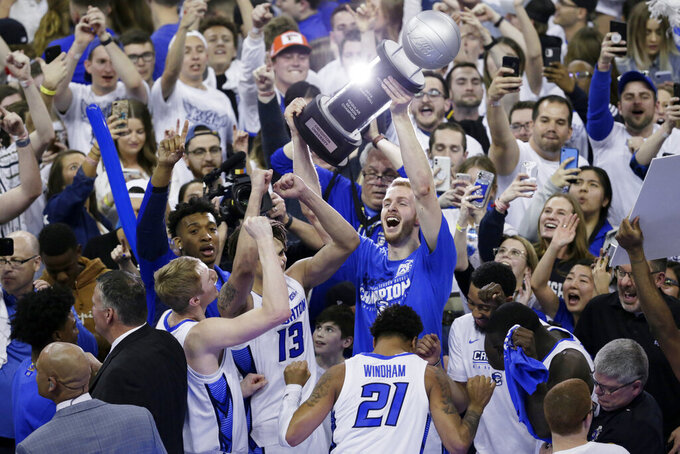 Creighton is hoping for a change of fortune after crushing losses in its last two Big East Tournament openers and another late-season injury to a key player.

The seventh-ranked Bluejays (24-7) are the top seed for the first time since they joined the league in 2013, but they likely will be without second-leading scorer Marcus Zegarowski.

Zegarowski injured his right knee in the win over No. 16 Seton Hall on Saturday and is doubtful for at least the Bluejays' first game at Madison Square Garden in New York. All-Big East first-team pick and leading scorer Ty-Shon Alexander is a likely substitute at point guard.

“It'll be an adjustment,” guard Mitch Ballock said. “In our system, Marcus is a point guard but we really don't have positions. We have five basketball players that go out and do what they're supposed to do.”

The Bluejays reached the tournament final in 2017 but have gone one-and-out the last two years.

In 2019, playing without an injured Damien Jefferson, the Bluejays lost 63-61 to Xavier after Alexander had a 3-point shot blocked in the final seconds. In 2018, without Martin Krampelj, they lost 72-68 to Providence in overtime after Ballock missed what would have been a tying 3-pointer in the final 10 seconds.

“Left wing. Short. Not that I remember it,” Ballock said, smiling.

Creighton has won 11 of its last 13 games, and coach Greg McDermott said his players have shown maturity dealing with adversity. He said he is confident they won't be shaken if Zegarowski isn't on the court.

McDermott said it will be important for his team to watch the St. John's-Georgetown game from the stands so players who haven't been inside Madison Square Garden can get acclimated.

“It's jaw-dropping the first time you walk into that building,” McDermott said. “It'll be good to get there and get a feel for it. It's the greatest basketball arena in the world, so the opportunity to play there obviously is an honor.”

Providence (19-12), which plays Butler (22-9) on Thursday, is on a six-game win streak featuring wins over Seton Hall and Villanova. The Friars lost four of five after a 2-0 Big East start but closed with a flurry to finish 12-6 in the conference, its best mark ever.

“During our struggles I don't think we wavered on who we wanted to be,” coach Ed Cooley said. “Different roles had to be allocated. Guys are playing confident, they're playing for one another and I feel a connectiveness on both sides of the floor.”

Georgetown, hamstrung by injuries to its top two scorers, has lost six in a row. The Hoyas nearly knocked off Villanova on Saturday, losing 70-69 after a questionable goaltending call on Qudus Wahab in the final seconds.

Jamorko Pickett has been a bright spot, raising his averages to 15.3 points and 6.2 rebounds during the losing streak. He had 20 points on 7-of-9 shooting against Nova.

“To me, that was his best game of the year,” coach Patrick Ewing said. “Still need more out of him.”

Creighton, Villanova, Seton Hall, Providence and No. 24 Butler have locked up NCAA bids, according to projections. Marquette (18-12) might need to win a game or two to get in, and Xavier might have to win the championship.

Villanova coach Jay Wright said the Big East Tournament has a unique vibe and is great preparation for the NCAAs.

“I really believe playing in Madison Square Garden in New York City, with the history of the Big East Conference and the history of that tournament, I believe there is the same effect,” Wright said. “It's so big, and I don't know if any conference tournament has that, where you're on Broadway, you're in the mecca, you're in the Garden, the world's greatest arena. It affects you, and it's an experience as a basketball player that you never forget.”

Marquette's Markus Howard leads the nation in scoring at 27.8 points per game. ... Myles Powell has shot just 26% on 3-pointers and 35% overall during Seton Hall's 3-4 stretch entering the tournament. Coach Kevin Willard said Powell has been battling tendinitis in his right knee. ... Xavier's Paul Scruggs (hamstring) is day-to-day. Scruggs has missed two straight games. ... St. John’s and Georgetown are matched as Nos. 8 and 9 seeds for the third time in four years. St. John’s is 2-0 in those games but hasn't been past the quarterfinals since winning the 2000 title.