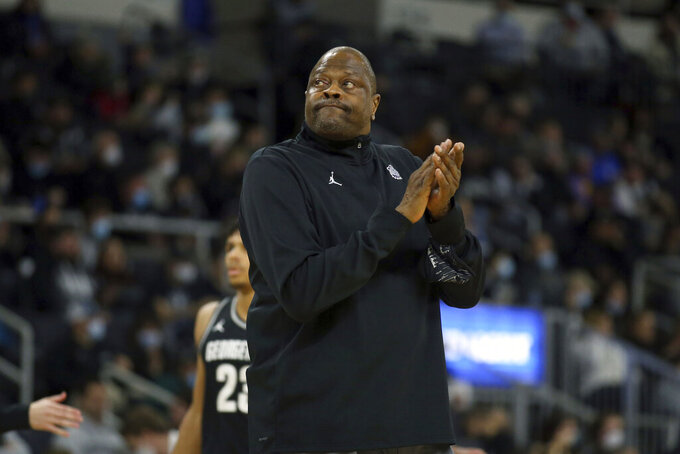 Georgetown head coach Patrick Ewing applauds while watching a replay on the videoboard during the first half of an NCAA college basketball game against Providence, Thursday, Jan. 20, 2022, in Providence, R.I. (AP Photo/Stew Milne)

PROVIDENCE, R.I. (AP) — Providence coach Ed Cooley wasn't sure what to expect from his team after five days locked in hotel rooms in quarantine and two days of practice following a COVID-19 outbreak.

The 21st-ranked Friars certainly looked sharp at the start of both halves.

Ed Croswell scored 15 points and Noah Horchler had 14 with seven rebounds to lead Providence past Georgetown 83-75 on Thursday.

“Obviously playing a game with short preparation, coming out of that pause, you just don't know how you're going to play,” Cooley said. “I was really happy with the way we performed for the most part. ... I thought our guys did a great job with their wind.”

Donald Carey led Georgetown (6-9, 0-4) with 21 points and seven rebounds in his return from COVID-19 protocols. Kaiden Rice finished with 19 points for the Hoyas, who have lost four straight.

“I thought he played great, especially coming out of protocol,” Georgetown coach Patrick Ewing said of Carey. “He's been shut down for 10, 11 days. We had to take our time getting him back into shape.”

Croswell hit all seven of his shots from the floor and went 1 of 2 from the free-throw line.

Trailing by 16 points midway into the second half, Georgetown made a late charge, slicing it to 64-60.

Horchler hit two 3-pointers and Justin Minaya one to help the Friars hang on.

“One of the timeouts, I looked at Noah and said: ‘Can you make the next shot because I’m coming to you?''' Cooley said. “He said: ‘Bring it on.’ It was great for his confidence.”

The Hoyas recovered from a miserable start and trailed 37-34 at halftime after Tyler Beard’s 3 at the buzzer.

PC opened the second half like the beginning of the game, breaking with an 11-2 spree.

Playing for the first time in 12 days after three straight postponements due to the outbreak, the Friars scored the first 13 points of the game when the Hoyas started 0 for 10 from the floor with four turnovers.

“We were all kind of chomping on the bit just to get back out there,” Horchler said.

Georgetown snapped the scoreless stretch when Carey hit a 3, coming 6:45 into the game.

“I didn’t think it took a lot out of us," Ewing said. “We started out slow unfortunately, but we fought back and cut it to three at halftime.”

Georgetown: The Hoyas looked unprepared at the start of both halves but quickly found their game. The bad conference start puts them in an early hole in the Big East.

Providence: Quality depth overcame some expected rusty play for a team that has a ton of experience. With the only blip in the last 11 games a 32-point loss at Marquette, the Friars are on schedule for a solid run for the top of the conference.

Minaya wore a mask — most of the time covering both his nose and mouth — while he was in the game.

“Until it hits you with this variant, I don’t know if I had an appreciation with the people that have tested positive,” said Cooley, who said he had the virus. “Just the breathing, its real. I’m winded to this minute.”

The way teams have been dropping games lately, the Friars should remain where they are, if not move up a few spots without a hiccup Sunday.

PILLING UP THE WINS

Cooley collected his 300th overall win in Providence's last game. After beating Georgetown, his next victory will move him ahead of Dave Gavitt (209-84 record from 1969-79) for second place on the school’s all-time list. Joe Mullaney had 290 in two stints with the school (1957-69 and ’81-85). Cooley's other victories came at Fairfield.

There was a video tribute midway into the opening half for his 300th, and Cooley waved when the crowd gave him a standing ovation.

Georgetown: Hosts No. 11 Villanova on Saturday at noon.