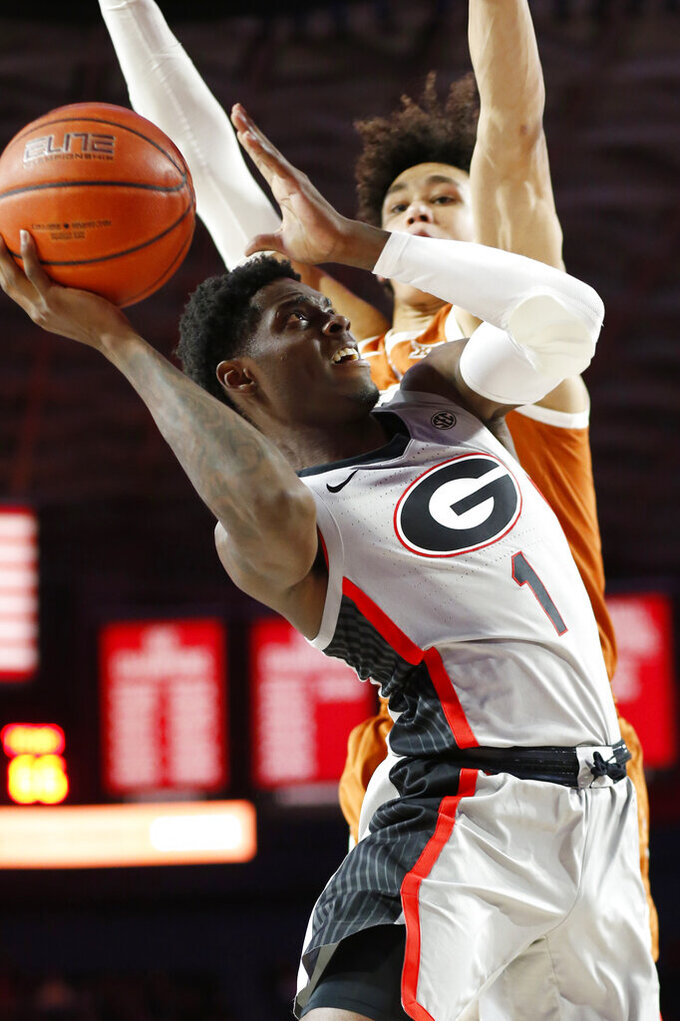 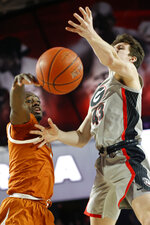 ATHENS, Ga. (AP) — Tom Crean couldn't help but marvel at Georgia's shooting from the floor, on 3-pointers and from the free-throw line.

"Not sure I've ever coached a team in all my 19 years that shot that well," said Crean, the former Indiana and Marquette coach in his first season in Athens.

Tyree Crump scored 21 points while setting a career high with six 3-pointers and hot-shooting Georgia beat Texas 98-88 on Saturday in the SEC/Big 12 Challenge.

The field-goal percentage was the fourth-best in school history. The 70.6 percent shooting on 3s was the Bulldogs' third-best.

From the perspective of Texas (11-9), Georgia's shooting numbers were a sure indicator of bad defense.

"When a team is making shots like that, you've got to find a way to make them miss and we didn't," said Texas coach Shaka Smart.

Teshaun Hightower and Nicolas Claxton each had 18 points. Claxton scored 16 in the second half.

"I can't even tell you how huge the game was for us in terms of building our confidence," Claxton said.

Crump made six of eight 3s.

Crean praised his players' movement without the ball.

"It's a template for what it's supposed to look like," Crean said of his ongoing efforts to instill his program.

Matt Coleman III had eight points for Texas when he fouled out with 3:33 remaining. Hayes was called for his fourth foul with 7:24 remaining and had 14 points.

With Georgia leading 70-66, Hammonds hurt his left shoulder with 8:25 remaining. He fell to the court in front of the Texas bench before being escorted by a trainer to the locker room before making a quick return.

A layup by Claxton, who entered the game for Hammonds, increased the lead to six points. Claxton, who remained on the floor when Hammonds returned to the game, had a jam and a 3-pointer on back-to-back possessions to give the Bulldogs their first double-figure lead at 81-71.

Hammonds, who had 14 points and nine rebounds, fouled out with 2:28 remaining.

Texas: The Longhorns have lost five of six as they continue to struggle on the road. One week after a promising win over then-No. 20 Oklahoma demonstrated their potential in home games, the Longhorns fell to 1-4 in true road games. The first three losses as the visiting team came by a combined total of nine points.

Georgia: Claxton, who averages 12.5 points per game, was plagued by early foul trouble. He went to the bench with two fouls about three minutes into the game and had only two points in the first half. Hammonds and Hightower each committed six turnovers.

Georgia set a season high with 26 turnovers, some forced by a full-court press Texas used to highlight the Bulldogs' chronic ball-handling woes. The Longhorns scored 26 points off the turnovers.

Georgia: The Bulldogs resume their Southeastern Conference schedule at Arkansas on Tuesday night.