Crutcher's 3 in OT lifts No. 13 Dayton over Saint Louis 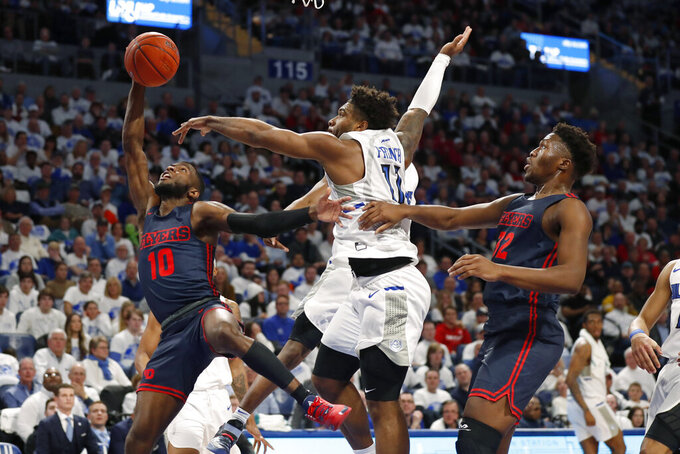 Dayton's Jalen Crutcher (10) has the ball knocked away by Saint Louis' Hasahn French (11) as Dayton's Jordy Tshimanga (32) watches during the first half of an NCAA college basketball game Friday, Jan. 17, 2020, in St. Louis. (AP Photo/Jeff Roberson) 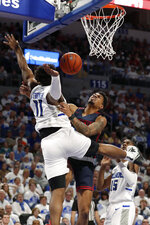 ST. LOUIS (AP) — Obi Toppin and Trey Landers did all the talking in Dayton's huddle heading into overtime against St. Louis. Jalen Crutcher did the listening.

Crutcher hit a 3-pointer at the buzzer in overtime and finished with 21 points, lifting No. 13 Dayton to a 78-76 come-from-behind win in the Atlantic 10 Conference showdown Friday night.

Dayton rallied from a 55-42 deficit with 7:40 left in regulation to win its seventh straight game.

“We told ourselves, we weren't going to give up — and we didn't," said Tobbin, who missed nine of his first 11 shots and had six points at halftime. “That's how this team gets it done.”

Yuri Collins hit two free throws with 6 seconds left in overtime to give the Billikens a 76-75 lead ahead of Crutcher's winner.

The Flyers did not call a time out after Collins' free throws and executed perfectly down the stretch. Tobbin set a solid screen to free up Crutcher,

“It takes a lot of confidence and you've got to be poised out on the court," Crutcher said. “My team was looking for me; I felt like I had to come through.”

Tobbin, who has at least 20 points in each of his last six games, even suggested that Crutcher change his name to “Clutch-er,” for his ability to come through in crunch time.

“He's the best shooter in the country,” Tobbin said.

The Flyers put together a 19-6 run late in the second half to go up 66-61 on a basket by Toppin off a pass from Watson.

Saint Louis, which had a three-game winning streak snapped, missed 17 of 37 free throws. Goodwin scored on a driving layup at the second-half buzzer to force the overtime.

“We had the game going where we wanted it,” Saint Louis coach Travis Ford said. “We wasted too many possessions offensively.”

ONLY LOSE TO THE BEST

“We said, not this time,” Tobbin said. “We're done with overtime losses.”

WIN AND THEY WILL COME

The contest was played before a sellout crowd of 10,007. It was the Billikens' first sellout since the 2014-15 season opener against Southern Illinois.

Dayton: The comeback win kept the Flyers tied with Duquesne and Saint Bonaventure for the top spot in the Atlantic 10. All three are unbeaten in the conference. Grant was pleased with the way his team performed in its first test in a hostile environment.

Saint Louis: The Billikens proved they belong among the A-10 elite, despite coming up short in their biggest league game of the season.

“We just have to finish,” Ford said.

Saint Louis: Will play at Davidson on Wednesday.