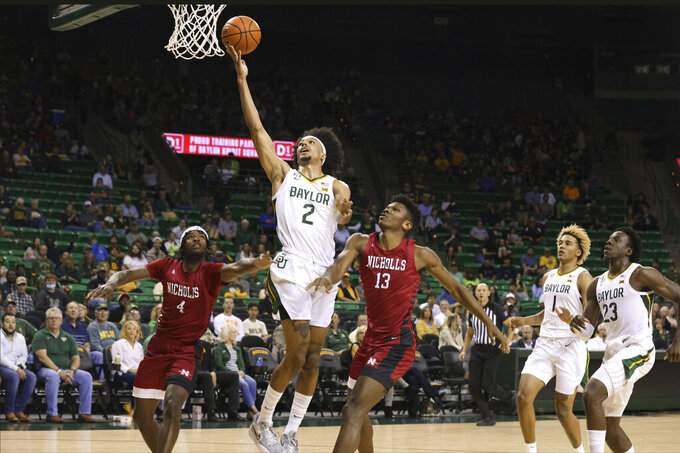 WACO, Texas (AP) — LJ Cryer is getting his chance to lead ninth-ranked Baylor after the departure of a trio of standout guards from last season's national championship team. He also has some pretty talented freshmen around him.

Cryer had a career-high 20 points to lead five players scoring in double figures as the Bears rolled to an 89-60 win over Nicholls State on Monday in a rare midday game.

“I’ve always been a scorer, but as far as developing my game, I feel like mentally I’ve grown a lot, just being able to flush out a miss whenever I miss, just move on from that play. Just on to the next one,” said Cryer, who finished 7-of-9 shooting with five of Baylor's 13 3-pointers.

Freshman Kendall Brown had 13 points and 10 assists for the Bears (2-0), who had 33 assists on their 37 made baskets. Jeremy Sochan, another freshman, had 14 points, while returning players Adam Flagler and Matthew Mayer had 12 each.

“We actually shot it OK in the first half, we were 5 for 9 from 3. We missed a lot of layups. Their length bothered us at the rim," Nicholls State coach Austin Claunch said. "Against their physicality, it’s hard to finish. And then when you miss, they're just so explosive in transition.”

Baylor coach Scott Drew said Cryer gets a lot of credit for working hard this summer, and the 6-foot-1 sophomore learned a lot being around Jared Butler, Davion Mitchell and MaCio Teague last season.

“That really helped him in going against them every day, made him want better, and he’s been confident from the beginning,” Drew said. “He’s played well from the beginning, and we knew he was going to have a great year because he showed us that.”

Cryer hit two 3s and had a jumper in the game's first seven minutes, when Baylor made 10 of its first 14 shots and jumped ahead 25-11. A few minutes after that, Mayer and Sochan had 3s in a 12-0 run for the Bears.

The Bears extended their lead to 73-43 midway through the second half when Cryer had a steal and passed ahead to Brown for a breakaway dunk.

“I know Kendall’s a high flyer. Whenever he gets a dunk, the arena goes crazy," Cryer said. "You love to see it. And we’re looking to get him those opportunities as much as we can.”

Baylor had 20 turnovers, which led to 26 points for Nicholls State.

“It was a game with a lot of transition opportunities, a couple of them, you’ve got to credit their speed, athleticism, slippery floor, but probably 16 of them, we can make better passes, sharper passes, deep passes,” Drew said. “So there’s things we can improve on.”

Nicholls State won its first three games for the first time since 1971-72. But facing top 10-Baylor, the world's largest Baptist university, was quite different than scoring 120 and 101 points in games played Friday night and Saturday against Carver College, a Bible college in Georgia with only about 100 students. The Colonels beat Northern Iowa in their opener.

Baylor: The Bears have won 15 consecutive home games, and 27 of 28, with the only setback in that span a three-point loss to Kansas two seasons ago. Unlike their opener Friday night, when they unveiled the national championship banner and presented rings to returning players and staff, the Bears got off to a fast start and led throughout. Incarnate Word, which is in the Southland Conference with Nicholls State, led by six points twice before Baylor had a half-ending 11-2 run and went on to an 87-60 victory.

About 3,000 students from 14 local elementary schools, many of the kids with sack lunches, attended the “I’m Going to College” game in the Ferrell Center.

Along with all of the kids, the grandmother of the Nicholls State coach attended the gae. Claunch's grandmother is a Baylor alumna who was dressed in Baylor green and gold. She got a picture together with her grandson and Drew, telling the Baylor coach her grandson did a pretty good job. She also took a picture with the Bears’ national championship trophy.

Nicholls State: Another Big 12 opponent, at TCU on Thursday night.

Baylor: Hosts Central Arkansas on Wednesday night in the third of four consecutive home games to start the season.