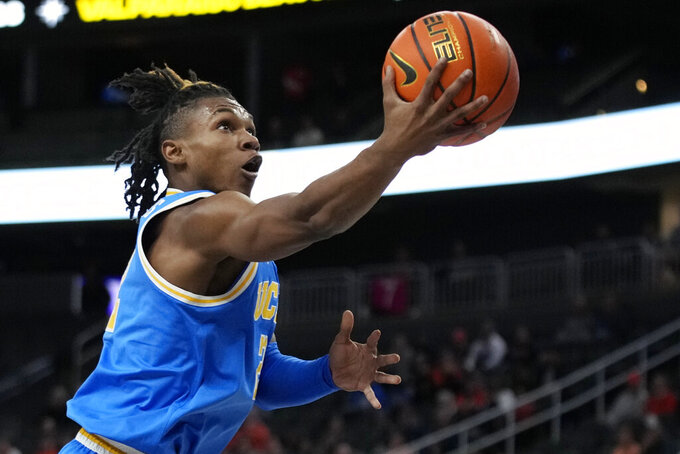 LAS VEGAS (AP) — LJ Cryer scored a career-high 28 points in a potential March preview to lead No. 5 Baylor to an 80-75 victory over eighth-ranked UCLA in Sunday's consolation game of the Continental Tire Main Event.

The Top-10 teams know what it's like to go deep into the NCAA Tournament, with Baylor winning the national championship two seasons ago and UCLA making the Final Four the same year.

This game had postseason intensity with 13 lead changes until the Bears (4-1) took the lead for good at 61-53 with an 11-point run midway through the second half. UCLA (3-2) stayed within range, but didn't catch Baylor.

Cryer helped make sure of that, as did Adam Flagler, who scored 22 points.

Up just a point, Cryer delivered a 3-pointer with 2:50 left. Flagler made two jumpers in the final minute, the last with 18 seconds remaining to all but end it at 76-71. Each player made two free throws in the final eight seconds.

Cryer, who made 4 of 8 3-pointers, also made the point to drive for baskets in registering his seventh career 20-point game and second this season.

“I tried to do a better job of mixing it up and not being one-dimensional and just out there catching and shooting 3s,” Cryer said. “Our percentages were obviously better when we got to the paint, so I was just trying to make my way in there.”

It was a strong bounce-back performance from Friday when Baylor lost 86-79 to No. 16 Virginia, which won the championship Sunday.

“We’re really doing something special early in the year,” Baylor coach Scott Drew said. “I’m just really proud of our guys and how hard they competed, and I think we adjusted and did a much better job grinding things out. I thought there was a stretch (against Virginia) where we didn't play as hard as we were capable. To win at this level, you've got to do it for 40 (minutes), and we did it tonight."

Jaylen Clark led the Bruins on Sunday with 23 points on 10-of-14 shooting to go with 10 rebounds. Jaime Jaquez Jr. scored 15 points and Tyger Campbell 12.

“If you score 75 points, you're supposed to win,” UCLA coach Mick Cronin said. “We're just not there defensively. This is a long season. Who you are now is irrelevant to who you are in March. I know all these games matter for seeding, but we're going to find out what we're made of."

Baylor, which won this tournament two years ago, improved to 6-2 in Las Vegas. UCLA has lost three in a row at T-Mobile Arena, including last season's Pac-12 Conference tournament championship game. The Bruins will be back in this arena for the conference tournament in March and possibly again when the NCAA Tournament West Regional is played here. They better hope they don't face Baylor again. The Bears have won 10 of their past 11 games against Pac-12 opponents, including six in a row.

Cronin criticized the UCLA defense that gave up 79 points to Illinois and 80 to Baylor, two teams that could make strong runs in the NCAA Tournament. If the Bruins are to toughen up defensively, they won't have many chances to do it against ranked teams. They play No. 4 Kentucky on Dec. 17 and twice face Pac-12 Conference rival Arizona, once in February and again in March.

Baylor won despite being outscored in the lane 42-20. The Bears likely won't win many games giving up that kind of margin, and they did compensate some when Cryer began to drive to the basket. No other opponent has come close to that success against the Bears, so this likely was a one-off. But also don't be surprised if other teams try to see if they can emulate UCLA's success inside.

Both teams are back in action for home games Wednesday. UCLA hosts 4-1 Pepperdine, and Baylor plays 2-3 McNeese State.