Culver leads No. 14 West Virginia from 19 down past Okla St 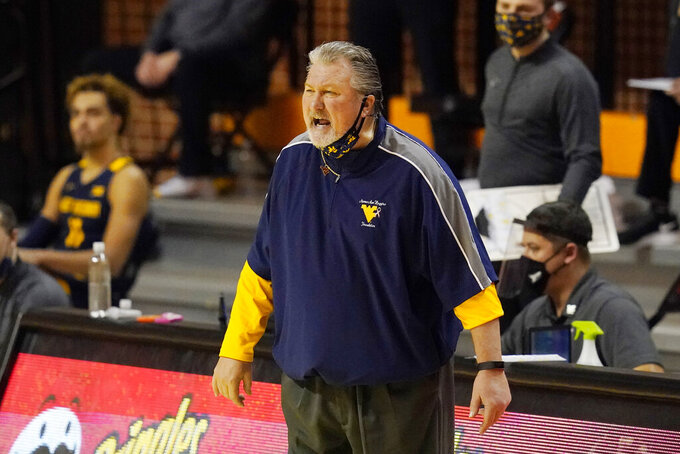 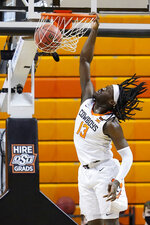 STILLWATER, Okla. (AP) — After a disappointing performance in his previous game, Derek Culver bounced back in a big way.

Culver had 22 points and 19 rebounds to help No. 14 West Virginia rally from 19 down in the second half to beat Oklahoma State 87-84 on Monday night.

“He loves those moments,” West Virginia coach Bob Huggins said of McBride, who had two fouls in 10 minutes during the first half. “He loves the opportunity to take charge and we got in foul trouble, we didn’t play him as much in the first half, so he was a little fresher, I think. He’s a guy who doesn’t shy away from the challenge.”

Taz Sherman added 20 points for the Mountaineers, who lost 75-71 at Oklahoma on Saturday.

After managing only two points and six rebounds in 22 minutes against the Sooners, Culver started out strong. He already had his Big 12-leading sixth double-double of the season by halftime, with 11 points and 10 rebounds heading into the break.

“We had a little sit-down (Sunday) about how far he’s come and why do we not want to continue down that path?” Huggins said. “I didn’t think he gave us the kind of effort we needed to have from him. The guys all look to him. When we need a basket, he’s the guy we’re going to throw the ball to.”

Freshman star Cade Cunningham had 25 points and nine rebounds for Oklahoma State (7-3, 1-3) before fouling out in the final minute. Isaac Likekele added a season-high 22 points and seven rebounds for the Cowboys, who were coming off a gutsy 82-77 overtime win at then-No. 13 Texas Tech on Saturday.

“We should have won the game, there’s no two ways about it,” coach Mike Boynton said. “I hope the one thing our guys take away from it is, you've got to finish. It’s a 40-minute game. You've got to continue to do the things that got you the lead — you can’t play differently.”

Oklahoma State led by 10 at halftime and increased its advantage to 68-49 when Rondel Walker knocked down two free throws with 11:15 remaining. But the Mountaineers responded with a stunning 18-3 run over the next four minutes that pulled them within four and silenced the socially distanced crowd of 3,350.

Minutes later, McBride scored eight straight points in a 10-0 spurt, including a 3-pointer from the left corner that gave West Virginia its first lead, 76-75, with 3:01 remaining. His 10-foot jump shot then gave the Mountaineers an 83-79 edge with 57.5 seconds left.

With the Mountaineers ahead 83-81, Cunningham drove to the basket with a chance to tie it but was called for charging, his fifth foul, with 31.1 seconds remaining.

“I think the biggest thing is you have to value every possession," Cunningham said. “I think we got too comfortable, really. You have to respect the game. I think we kind of lost sight of, if we don’t play the right way, it’s going to come back to haunt you.”

West Virginia: Huggins earned his 300th win at West Virginia, second in school history to the 439 games Gale Catlett won from 1979-2002. Huggins is one victory behind North Carolina coach Roy Williams (891) for fifth on the Division I career list. In 39 years as a head coach, Huggins is 890-375 overall.

Oklahoma State: The Cowboys led for virtually the entire first half and well into the second. A 7-0 run capped by Likekele’s two free throws with 12:07 left in the opening period gave Oklahoma State a 26-14 lead, and Bryce Williams’ 3-pointer with 3 seconds to go gave OSU a 45-35 advantage at halftime. But the Cowboys couldn't hold on and they've dropped three of four — with those three defeats coming by a combined seven points.

The Mountaineers, who dropped five spots in the AP Top 25 following their loss at Oklahoma on Saturday, looked as though they might fall a little more until they mounted their comeback. Now they might even move up.

Oklahoma State received votes in the most recent poll and if the Cowboys had been able to pull out the victory, it would have given them back-to-back wins over ranked opponents and a good shot at moving into the Top 25 next week.

“We've just got to go out there and finish that game,” said Likekele, who also had four assists. “Up 19 with 11 minutes left, there’s no way we should have given up that game.”

West Virginia: The Mountaineers return home to play No. 4 Texas on Saturday.

Oklahoma State: The Cowboys head out on the road to face Kansas State on Saturday.