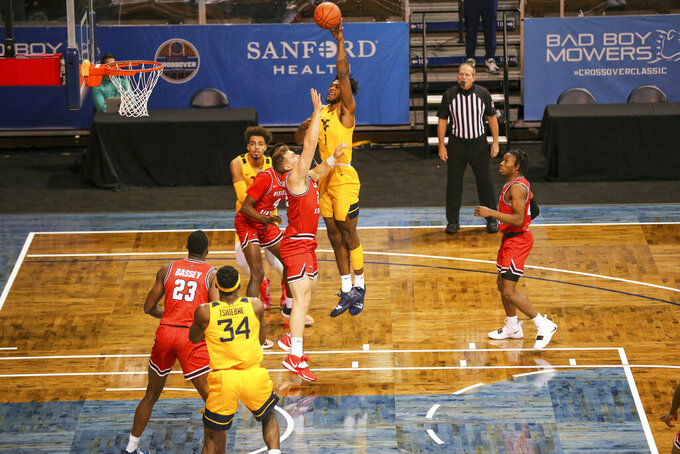 SIOUX FALLS, S.D. (AP) — West Virginia rallied from a 10-point second-half deficit against Western Kentucky and had to hold off a frenzied rally down the stretch to win the Bad Boy Mowers Crossover Classic.

The 15th-ranked Mountaineers (3-0) led 66-57 with just under three minutes to play before Western Kentucky (2-1) cut it to four in the final minute. It looked like the Hilltoppers would get the ball back, down four, after a scramble for a rebound out of bounds was given to Western Kentucky. The call was reversed after a replay review and West Virginia made free throws down the stretch to seal the win.

Derek Culver, who was named MVP of the tournament, scored 15 points to lead West Virginia. Miles McBride had 14 points and Taz Sherman scored 12.

McBride finished the tournament as West Virginia’s leading scorer at 16.3 points per game during wins over South Dakota State, VCU and Western Kentucky. He also finished with 10 assists over the three games.

“I’m really just trying to let the game come to me and just hoping the shots come,” McBride said. “Coach tells me to shoot them, and I shoot with a lot of confidence. If the shot’s there, I’m going to take it.”

Charles Bassey scored 15 points to lead Western Kentucky, which led by three at halftime and used a quick 9-2 run to start the second half to build the 10-point lead. Taveion Hollingsworth scored five points during the run and finished with 13.

Following a basket by Bassey to make it 45-35, West Virginia coach Bob Huggins called timeout. Culver then converted a three-point play, and after Western Kentucky battled back for a 50-41 lead, West Virginia went on a 23-5 run.

“I think we took some things for granted and didn’t play as hard,” Huggins said. “We talked to them at halftime about how much harder we have to play and how much better we need to execute what we’re doing.”

The first half featured six ties and 12 lead changes.

West Virginia once again had the advantage on the glass. The Mountaineers won the rebounding battle 36-30, including 11 offensive boards. Over the three-day tournament, West Virginia outrebounded its opponents 126-103, including a 51-38 edge on the offensive end.

“There’s not a team in the country on that back line that’s as physical, and as big, and as strong as West Virginia,” Western Kentucky coach Rick Stansbury said. “They present so many problems for 40 minutes of the game.”

Bassey had a big second half after getting into foul trouble early. He picked up his second foul just four minutes into the game and sat for the remainder of the half. He had 13 points on 6-of-10 shooting and seven rebounds in the second half.

Western Kentucky: At Louisville on Tuesday.

West Virginia: Plays No. 1 Gonzaga at the Jimmy V Classic in Indianapolis on Wednesday.