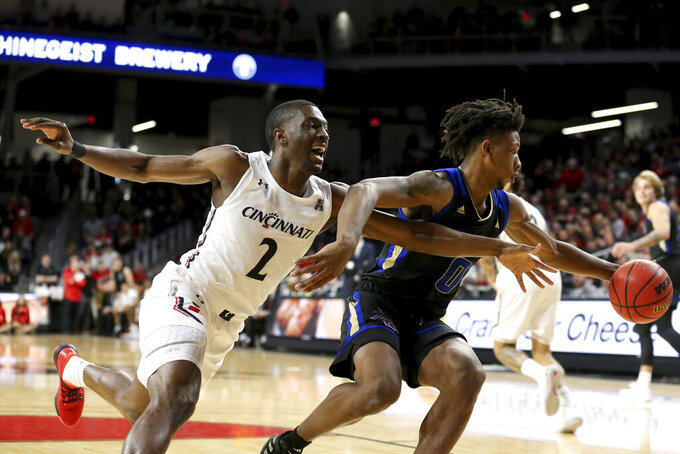 Cincinnati guard Keith Williams (2) reaches for a steal on Tulsa guard Brandon Rachal (0) during the first half of an NCAA college basketball game Wednesday, Jan. 8, 2020, in Cincinnati. (Kareem Elagazzar/The Cincinnati Enquirer via AP) 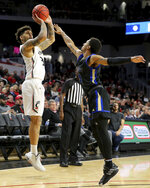 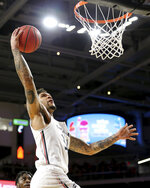 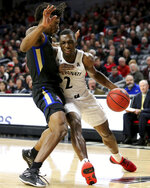 CINCINNATI (AP) — Wednesday's game was what the Cumberland cousins had in mind when they got together at Cincinnati.

Jarron Cumberland scored a game-high 22 points, cousin Jaevin added 16 off the bench and the Bearcats limited the Tulsa Golden Hurricane to a season-low in scoring on the way to a 75-44 win in an American Athletic Conference game on Wednesday.

“It felt nice," said Jaevin, a graduate transfer who joined his cousin after Jarron pondered trying for the NBA before deciding to return for his senior season. "That’s what we’re capable of doing.”.

Chris Vogt finished with 12 points and 11 rebounds for Cincinnati (9-6, 2-1), which bounced back from a jarring loss on Saturday at Tulane to a Green Wave team picked in a preseason conference coaches' poll to finish last in conference.

Tre Scott added 10 points, six in the second half, including a thunderous dunk that had the crowd of 10,138 roaring.

“I was proud of our performance tonight,” first-year coach John Brannen said. “That's a really good Tulsa basketball team. I was impressed with them on film. For our guys, our comments this week and for today's shootaround were, ‘Don’t walk into the gym if you’re not coming in with a sense of urgency.' For the first five minutes, we had tremendous urgency. Guys were flying around. We had a lot of deflections.”

Martins Igbanu scored nine points to lead Tulsa (9-6, 1-1), which has lost four of its last five games. The Golden Hurricane finished 0-for-17 on 3-point range.

Jarron Cumberland scored 10 in the first half to help Cincinnati take a 26-22 lead in the locker room. He finished the game one point short of matching his single-game season-high while dishing out a personal season-high seven assists.

“I felt good tonight just playing," Jarron Cumberland said. "A lot of guys were open, and I found them.”

Vogt tipped in Keith Williams’ missed 3-pointer as the buzzer sounded to end the first half.

Cincinnati honored former player, assistant coach and long-time radio broadcaster Chuck Machock with a video board tribute during the first media timeout. Machock, a member of the school’s Athletic Hall of Fame, passed away on Saturday.

Cincinnati placed at least four players in double figured for the 10th time in 15 games this season.

Tulsa’s previous single-game low in scoring was 59 in a 14-point loss at Texas-Arlington on November 9.

Tulsa: The Golden Hurricane haven’t won in Cincinnati since Jan. 5, 1967, when both teams played in the Missouri Valley Conference..

Cincinnati: The Bearcats have won seven straight games against Tulsa and nine of 10 since the teams joined the AAC.

Cincinnati: The Bearcats play the first of back-to-back road games on Saturday at Central Florida.