Da Silva, Cardinal pull away from Washington in 2nd half 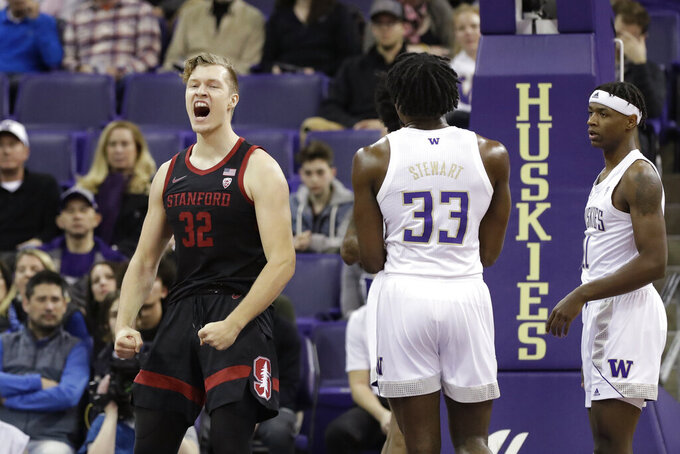 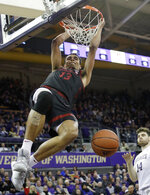 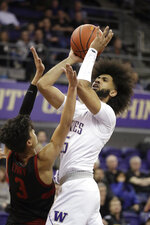 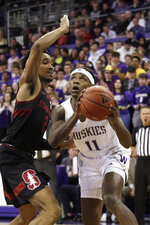 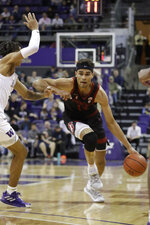 SEATTLE (AP) — There’s a point in every college basketball team’s season when it’s now-or-never time, and Stanford has reached that point.

After losing seven of eight games over the last month, the Cardinal were on the verge of slipping out of the postseason tournament conversation as Washington grabbed the lead on a four-point play early in the second half that seemed to turn the momentum on Thursday night.

Stanford then forced the Huskies to miss 16 of their next 17 shots. Asked for an explanation, Cardinal coach Jerod Haase had a fairly simple one.

“We consider ourselves an elite defensive team,” he said.

Washington got 14 points from Isaiah Stewart, who fueled the Huskies during an entertaining first half and also set the school’s freshman record for blocks and rebounds.

The Huskies took a 37-35 halftime lead on Nahziah Carter’s fastbreak dunk following a steal and touch pass form Marcus Tsohonis. The rally was spurred in part by a flagrant foul on Lukas Kisunas, giving Stewart two free throws, and an 8-4 run to finish the half.

RaeQuan Battle’s four-point play with 16:03 in the game gave the Huskies 47-44 lead, but things went awry from there. Stanford held Washington scoreless for the next 5:10, then for another 4:21 after a pair of free throws, building a 55-49 lead with 9:14 left.

They weren’t done, adding another 4:27 scoreless stretch. In all, the Huskies made 1 of 17 field goals during those long barren runs, shooting 27% from the field in the second half. They hit just 4 of 24 3-point attempts.

The late fade is a familiar theme for the Huskies, who have struggled with second-half offensive efficiency all season. Stanford doubled down on the double team on Stewart in the second half, holding the highly touted forward to four points on 2-of-5 shooting. The Huskies also were without Nate Roberts (held out of practice for a week with a head injury) and Hameir Wright (illness).

“We tried to adapt, but we just got a lot of these empty possessions where it was a throw up (as the shot clock expired) rather than being able to get a good shot off of execution, speed and precision,” Washington coach Mike Hopkins said. “That wasn’t happening in the second half.”

Tsohonis added 11 for Washington, and Carter and Battle added 10 apiece. Stanford also got 12 points from Spencer Jones, who was 4 of 8 on 3-pointers.

“That was a big deal,” Haase said. “In terms of big picture, that was a big deal. Those two teams out there, both teams have had a tough deal the last month. Both teams were desperate for the win certainly. For us to be able to come out on top on the road against a very talented team, a very well-coached team and a team that was just as talented as us, means a lot to us.”

Stewart set a pair of Washington freshman records against the Cardinal. The McDonald’s All-American’s four blocks moved him to 59 this season and past Maruqese Chriss (55, 2015-16), now a member of the Golden State Warriors. And his five rebounds give him 236, one more than Mark Pope in 1991-92.

Stanford: This victory will look great on the Cardinal’s tournament resume. After this road swing through the Evergreen State, home games against Utah and Colorado loom large next week and will go a long way to determining Stanford’s postseason hopes.

Washington: Another bad loss in an increasingly difficult season. The Huskies looked competitive for a half, then were anything but down the stretch.

Stanford: The Cardinal travel across the state to play Washington State on Sunday.

Washington: The Huskies will try to salvage a series split when they host Cal on Saturday.