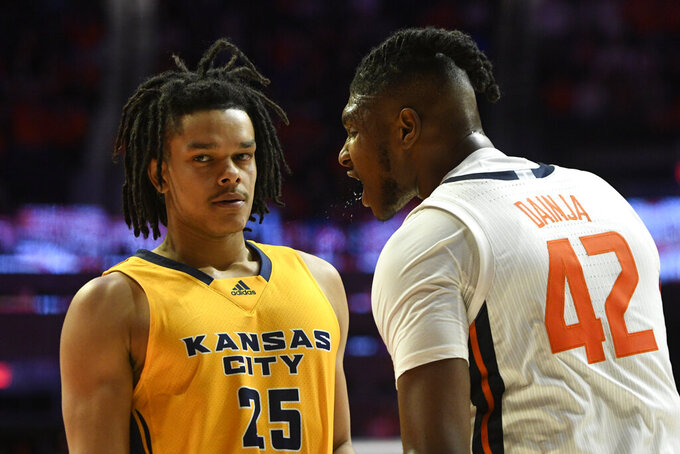 Illinois' Dain Dainja (42) gets in the face of Kansas City's Tyler Andrews after a shot by Kansas City's RayQuawndis Mitchell was blocked during the second half of an NCAA college basketball game Friday, Nov. 11, 2022, in Champaign, Ill. (AP Photo/Michael Allio) 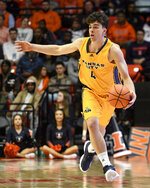 Shannon opened the scoring with a vicious dunk, but Illinois fell behind 9-5 early as it missed 17 of its first 18 shots.

Dainja broke the drought by getting a fadeaway jumper to go down and drawing a foul after grabbing an offensive rebound. He hit the ensuing free throw and Matthew Mayer drilled a 3 on the next possession, part of a 21-4 run the Illini pieced together to take a comfortable 17-point lead into the half.

“Defense was the thing that changed the game for us today,” Dainja said. “Energy is what I wanted to (bring) to the team.”

“Tough one for the guys,” first-year Kansas City coach Marvin Menzies said. “I feel bad for the players just because of the lack of ability to show the progress. When you’re rebuilding a program you want to keep taking steps forward. There’s peaks and valleys in a season. The teams that deal with the adversity during the valleys are the teams that end up on top."

“(It goes) back to the defense, back to just playing together," Epps said. "I feel like when we move the ball, play defense, when we play together, we’re just a great team.”

Another freshman guard, Skyy Clark, added 10 points and five rebounds with zero turnovers after he committed five in his Illinois debut on Monday.

Plenty of questions have hovered over how Illinois will replace the production and influence of former center Kofi Cockburn.

Dainja appears to have some answers.

“I definitely learned a lot from him, but I work hard,” Dainja said. “I've been working hard all whole life. This is starting to pay off."

After the game, Underwood said he “got in this 36 years ago for nights like tonight.”

“To see young people create a memory, five years worth to be honest, for Trent and Da'Monte,” Underwood said. “The (tribute) video was incredible.”

Kansas City: The Roos made it difficult on the Illini early on with a strong effort on the glass and by mixing in some zone, despite being clearly outmatched. Menzies’ group seems to lack perimeter shooters, which also showcased itself in a 59-56 loss to Division II Lincoln (Missouri) on Monday when the Roos went 5 of 25 from long distance.

Illinois: The result was hardly ever in question Friday, but this Illinois team seems to be struggling with shot selection so far against mid-major opponents. That will have to improve if the Illini are going to show well in Las Vegas in games against No. 12 Texas and either No. 5 Baylor or No. 18 Virginia later this month.

Kansas City: Hosts Calvary Bible, which plays in the Association of Christian College Athletics, on Monday.