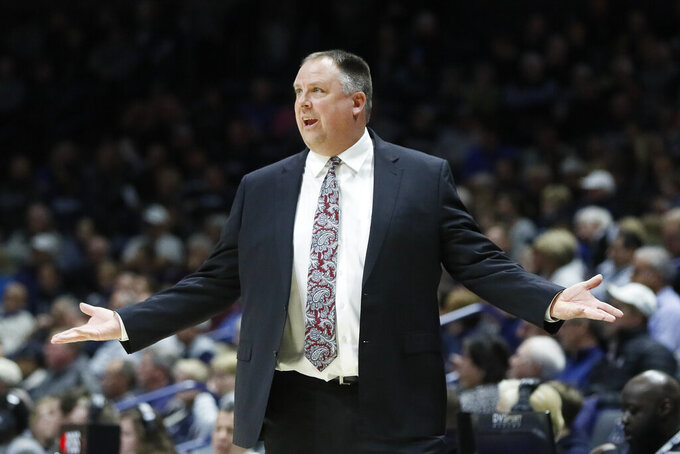 FILE - In this Dec. 4, 2019, file photo, Green Bay head coach Linc Darner gestures during the first half of an NCAA college basketball game against Xavier in Cincinnati. Darner is out as the men's basketball coach at Green Bay after posting winning records in four of his five seasons on the job. Chancellor Michael Alexander confirmed the move Monday, May 18, 2020, saying in a statement that the university and coach “have decided to part ways.”(AP Photo/John Minchillo, File)

GREEN BAY, Wis. (AP) — Linc Darner is out as the men's basketball coach at Green Bay after posting winning records in four of his five seasons on the job.

Chancellor Michael Alexander confirmed the move Monday, saying in a statement that the university and coach “have decided to part ways.”

Darner owned a 92-80 record at Green Bay. The Phoenix went 17-16 this past season and lost to Northern Kentucky in the Horizon League Tournament semifinals.

“We appreciate the leadership of Coach Darner and his focus on coaching and mentoring the outstanding student-athletes that have been part of this program during his tenure as head coach,” Alexander said. “We are a Division I university and remain committed to continuing the legacy of our outstanding Division I athletics program in the future.”

Athletic director Charles Guthrie said in a statement that school officials thank Darner “for his service and strong commitment to our student-athletes here at UW-Green Bay and to the Green Bay community over the past five years. Guthrie added that “we wish him all the best in his future endeavors.”

In Darner’s debut season at Green Bay in 2015-2016, the Phoenix went 23-13 and earned the school’s first NCAA Tournament bid in 20 years. The Phoenix lost to Texas A&M in the first round — Green Bay's only NCAA Tournament win came in 1994, under coach Dick Bennett over California.

The 49-year-old Darner has an overall head coaching record of 384-197 that also includes 13 seasons at Division II programs - four at Saint Joseph’s (Indiana) and nine at Florida Southern. He led Florida Southern to a Division II national championship in 2015.

In a statement issued by the university, Darner thanked former Chancellor Gary Miller and former athletic director Mary Ellen Gillespie for hiring him. He also thanked his staff, recruits and current and former players while noting his program’s high graduation rates and Academic Progress Rate scores.

“I cannot wait to advance my career as a head basketball coach and am looking forward to new opportunities,” Darner said.