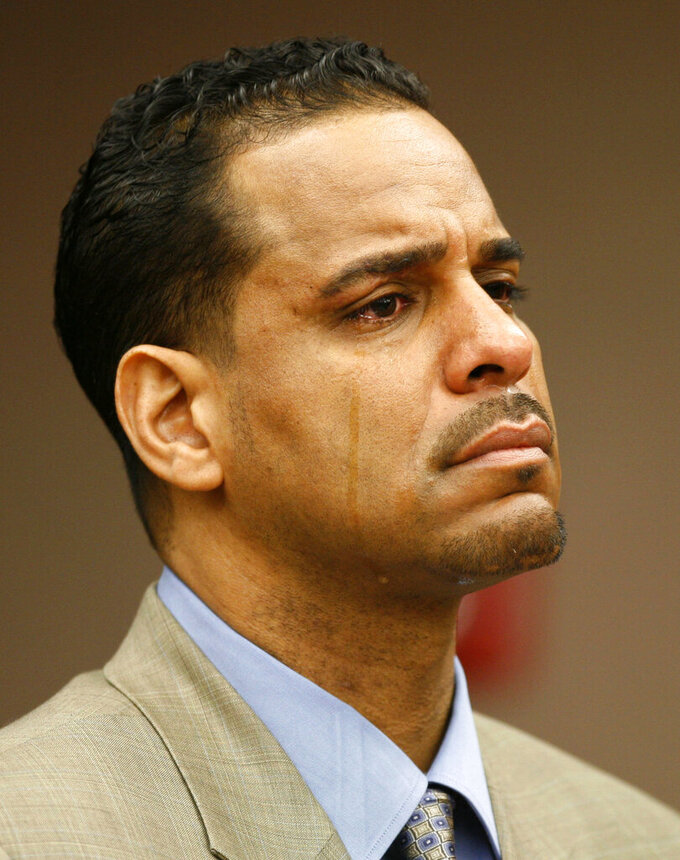 FILE - In this Feb. 23, 2010 file photo, Tears fall down the cheeks of Jayson Williams as he is sentenced to five years in prison, Tuesday Feb. 23, 201,0 at State Superior Court in Somerville, N.J. The teenage daughters of former NBA All-Star Jayson Williams have denounced St. John’s University for its decision to induct their father into the school’s Athletics Hall of Fame. Tryumph and Whizdom Williams both wrote open letters they sent Friday, Oct. 21, 2022, to The Associated Press, and also planned to send to St. John’s, that said the school should be ashamed for his induction into the class during Saturday’s homecoming weekend. (AP Photo/Matt Rainey, Pool, File) 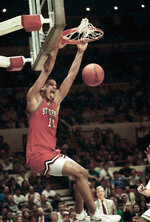 The daughters of former NBA All-Star Jayson Williams have denounced St. John’s University for its decision to induct their father into the school’s Athletics Hall of Fame because of accusations of neglect in their lives following his role in the 2002 fatal shooting of a limousine driver.

Tryumph and Whizdom Williams both wrote open letters they sent Friday to The Associated Press, and also planned to send to St. John’s, that said the school should be ashamed for his induction into the class during Saturday’s homecoming weekend.

The 54-year-old Williams served more than a year in prison for the accidental shotgun death in his New Jersey mansion of chauffeur Costas Christofi.

Whizdom J Williams, an 18-year-old student at the Fashion Institute of Technology, accused her father of being an alcoholic and “a deadbeat father who lacks any sense of remorse.”

The sisters each accused Williams of neglect, emotional and verbal abuse and that the power forward who once signed a six-year, $86-million deal with the New Jersey Nets failed to provide adequate financial support. Tryumph Jaye Williams, a 19-year-old studying theater at DePaul University, detailed accusations that her sister was locked in a trash chute by Williams. Tryumph also lashed out at St. John’s as “possibly, fools, misusing money to honor Jayson Williams.”

“Why are you being honored and inducted into the hall of fame when I’ve always had to earn my survival, let alone my success, in spite of you? St. John’s University — you should be ashamed of yourself,” she wrote.

Williams killed Christofi with a 12-gauge shotgun while showing it to friends, having failed to check the weapon’s safety mechanism before snapping the gun closed. Williams then wiped down the weapon and placed it in the chauffeur’s hands, stripped off his own clothes, handed them to a friend and jumped into his pool, according to testimony. Williams’ lawyers maintained that the shooting was an accident and that his actions were driven by panic.

Williams made a tearful apology to the victim’s family when he was sentenced for the shooting in 2010.

But his daughters wrote that Williams never made amends with them.

“I knew that I couldn’t change who my father was or the way he viewed and treated me,” Whizdom wrote. “I knew that the contrition and apologies were never coming.”

She also wrote a poem about her father and dedicated it: “To the weakest man I know, Jayson.”

Williams declined comment to the AP. St. John's planned to go ahead and include Williams in the weekend ceremony.

“Jayson Williams’s life journey is one that includes childhood trauma, time spent in a homeless shelter, addiction, incarceration, and recovery; issues that impact countless American families. The family dynamic between Jayson and his children is not a matter that St. John’s University will discuss," St. John's spokesperson Brian Browne wrote in an email statement to the AP.

“Part of the recovery and redemption process is restoring trust, accepting help, and finding comfort and support in the journey and that, coupled with his athletic accomplishments, is what St. John’s University recognizes with Jayson Williams during this Homecoming weekend.”

Williams averaged 8.1 points and 12.1 rebounds over nine seasons with the Philadelphia 76ers and New Jersey Nets. The 6-foot-10 Williams was among the NBA’s best rebounders when leg injuries led to his retirement from the Nets in 2000.

Williams is scheduled to join a seven-person class at St. John’s induction ceremony that also includes 2016 Olympic high jumper Priscilla Frederick and 2016 Olympic fencing silver medalist Daryl Homer. Williams played three seasons at St. John’s under Hall of Fame coach Lou Carnesecca. A co-captain in 1989-90, Williams was part of a St. John’s team that won 24 games and advanced to the second round of the NCAA Tournament. He was the 21st overall pick in the 1990 draft and finished with 3,472 points, 3,584 rebounds and 301 blocks during his pro career.

Williams, divorced from his daughters' mother, Tanya, paid Christofi’s family more than $2 million in 2003 to settle a wrongful death lawsuit.

He has since founded the addiction rehabilitation program the Rebound Institute in Florida, that has been promoted by St. John’s as a success story.