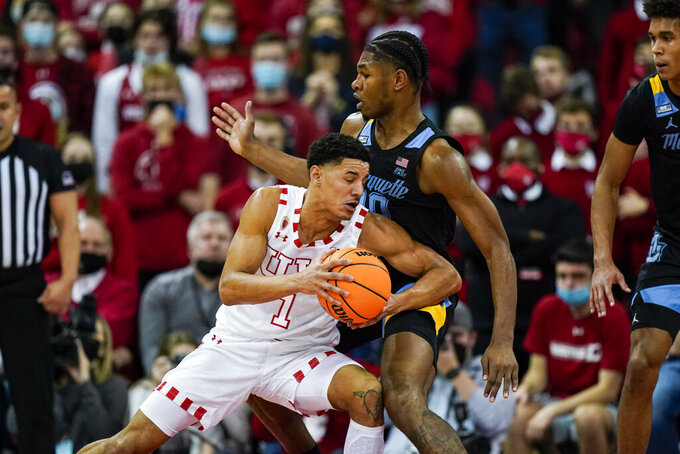 MADISON, Wis. (AP) — Brad Davison is no slouch offensively. Still, with a talent like Johnny Davis on Wisconsin’s roster, he says sometimes the best approach is to give the sophomore the ball and let him figure it out.

Davis, who averaged seven points a season coming off the bench last year, scored 25 points on 9-of-14 shooting Saturday to lead No. 23 Wisconsin past in-state rival Marquette 89-76.

Davis, who missed Wisconsin’s only loss of the season, has lifted his season average to more than 20 points a game.

“In my opinion, he’s one of the best scorers in the country, and he’s shown that night in and night out,” said Davison, who added 20 points for Wisconsin (7-1).

Badgers coach Greg Gard insisted it’s not that simple, crediting the spacing Wisconsin utilizes for creating the lanes that give Davis opportunities. And they did that to perfection on Saturday for a stretch in the second half.

Wisconsin was sluggish out of the gate, hitting 5 of 19 from the field (26%) in a game that started with 13 lead changes and six ties.

But the Badgers began to take control in the second half, hitting 11 of 12 as they turned a one-point advantage into a 59-44 lead.

Marquette briefly cut the lead to single digits. But the Badgers then ran away with the game, shooting 70% in the second half and dropping 55 points on Marquette (7-2).

The 55 points that Marquette allowed in the second half was not far off from the 68 they had been giving up a game coming into Saturday.

“We just didn’t impose ourselves on the defensive end, and I think that was demoralizing for our guys on offense,” Smart said.

Steven Crowl and Chucky Hepburn each added 15 points for Wisconsin.

Marquette regularly presses and forces opponents into 16 turnovers a game. But Wisconsin was largely unfazed by the full-court pressure. The Badgers finished with 11 turnovers, just two more than their season average.

Gard praised Hepburn, the first true freshman to start a season opener for Wisconsin since 2001, saying he’s wise beyond his years.

“For Chucky to have six assists, two turnovers and to get pressed anytime he’s in the game, that’s a pretty good sign,” Gard said.

Smart, in his first year at Marquette, said he’s still looking for the right combination of players and said the Golden Eagles are still learning how to play with each other.

It was the first true road game of the season for Marquette.

Wisconsin, which made its debut in the most recent poll, chalked up another quality win, having beaten Texas A&M, Houston, Saint Mary’s, Georgia Tech and now Marquette.

Marquette: The Golden Eagles are off to a better-than-expected start under Smart. But it wasn’t a pretty second half for Smart, who grew up in a Madison suburb.

Wisconsin: The Badgers continue to exceed expectations, with Davis leading the way as a sophomore.

Marquette: At Kansas State on Wednesday.