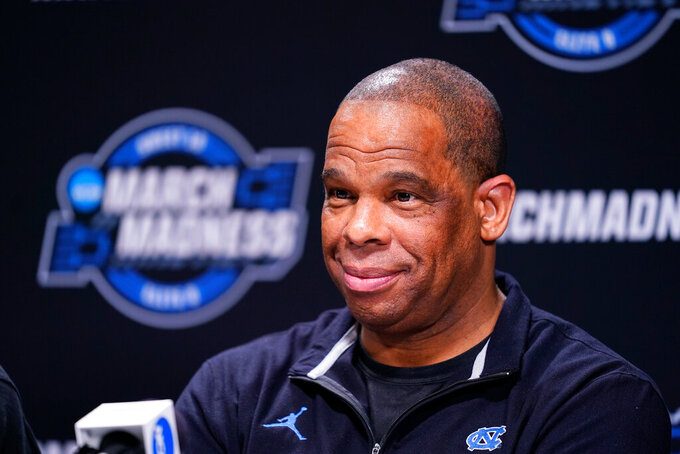 PHILADELPHIA (AP) — Hubert Davis read North Carolina a Bible verse to keep a team one win from the Final Four on the path of the righteous. He chose Proverbs 4:25, which says, “Let your eyes look directly ahead. And let your gaze be fixed straight in front of you.”

It’s a less-cliched, more Biblical way of saying, take it one game at a time.

Davis is devout, humble and self-effacing to the point that he had a catch in his voice after the Tar Heels beat UCLA in an East Region semifinal. He talked about how all he wanted was for his players to experience all the joys he had felt when he starred at North Carolina.

A gentle hand — to a point.

“Let’s say before practice, he’ll be smiling, we’ll be watching film,” forward Armando Bacot said, laughing. “As soon as we get on the court, he’ll just start going off. Somebody missed a layup or we’re not going hard enough in a certain warmup drill. It kind of always catches us off guard but it always keeps us on our toes.”

Fiery or friendly, the 51-year-old Davis has navigated his way through a rookie coaching season that has North Carolina (27-9) on the brink of a Final Four. All the eighth-seeded Tar Heels have to do Sunday in the East Region is accomplish what Kentucky, Murray State and Purdue could not: beat America’s favorite NCAA Tournament bracket-buster, 15th-seeded Saint Peter’s (22-11).

Saint Peter’s may be the people’s champs. Listen to voices around the basketball landscape, and it’s clear Davis has a wider following.

Philadelphia 76ers coach Doc Rivers stopped himself Friday night as he broke down another victory to give a shoutout to his former New York Knicks teammate.

“How about Hubert Davis? My teammate. I’m so proud of him,” Rivers said. “Hubert, him and Monty (Williams) were my rooks with the Knicks. What Hubert is doing, I’m so thrilled to death with that kid. He was so meek. He never talked. Cried the first playoff game because of the intensity. And now he’s coaching in the final eight. I’m just really proud of Hubert Davis.”

Charles Oakley, a longtime NBA enforcer and rebounding machine, also played with Davis on those 1990s Knicks team and remembered him as a gentle soul on a team loaded with Type A personalities. Oakley. Patrick Ewing. Coach Pat Riley. New York was a long way in distance — even longer in a swagger and cool factor — from Chapel Hill. Davis still found his niche as the top backup guard on a team that reached the NBA Finals.

“Hubert was a smart, quiet, guy. Detailed guy,” Oakley said. “He wasn’t a guy that came to practice and didn’t know what he was supposed to do.”

Davis played for six teams over 12 NBA seasons and followed with a successful stint as a college basketball analyst for ESPN. Former North Carolina coach Roy Williams persuaded Davis to leave ESPN to join his coaching staff in 2012. Davis spent nine seasons as an assistant to Williams, and his duties included coaching UNC’s junior varsity program. When the Hall of Famer Williams retired after last season, he endorsed Davis as his successor. And in April, Davis became a first-time college head coach.

“This is a grown man who has a giant heart and who absolutely is doing this because he loves the opportunity,” former Tar Heels teammate Eric Montross said. “It’s not about having the title of head coach. It’s not about the money he’s making as head coach. It’s about impacting the lives of young men walking the walk that he walked.”

The walk this season, well, it was bit more uphill than Davis might have remembered from playing for Dean Smith. The Tar Heels fell out of the AP Top 25 after consecutive losses to Purdue and Tennessee in November. There was a 29-point loss to Kentucky. And then three losses in January, infamously (at least in Chapel Hill) highlighted by a 22-point loss at, of all places, Wake Forest.

Forget the Final Four. The Tar Heels were playing at that point just to get to March.

The keyboard critics started to write on message boards that maybe Davis wasn’t the right fit. Twitter haters pounded out 280-character bursts second-guessing the decision to go with a guy who had never coached a game. The murmurs, the whispers, the detractors may have been growing outside Chapel Hill. The Carolina family stayed loyal and no one even privately doubted Davis was the right coach.

The Tar Heels held a players-only meeting after the Wake Forest loss to clear the air and then were unsure what they would get when they met with Davis.

“We were expecting him to come in hot and chew us out,” forward Leaky Black said. “I feel like he was super positive and that was a turning point for us.”

The Tar Heels have lost just three times since Jan. 24, highlighted by a beatdown of Duke in retiring coach Mike Krzyzewski’s final home game and a win over defending national champion Baylor in the second round.

“Playing for coach Smith and on those teams, there was such a commitment to each other,” Montross said. “It didn’t mean we had to be best friends. It meant you were committed to one another. That has been a hallmark of what Hubert Davis has done and who he is.”