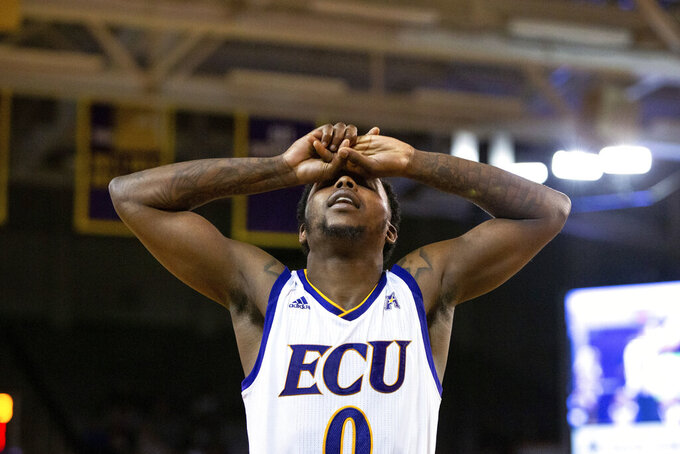 East Carolina's Isaac Fleming (0) reacts to a call during the second half of an NCAA college basketball game against Houston in Greenville, N.C., Wednesday, Feb. 27, 2019. (AP Photo/Ben McKeown) 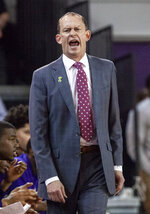 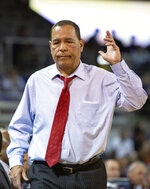 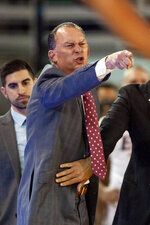 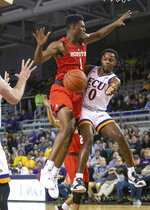 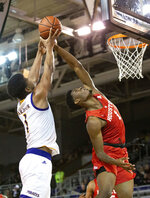 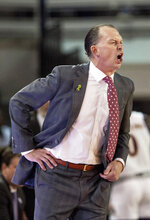 GREENVILLE, N.C. (AP) — Houston has been just about perfect all season to climb the rankings and take control of the American Athletic Conference race.

That didn't change Wednesday night, even on the road in what turned into an ugly environment and a test of the Cougars' composure.

Corey Davis Jr. matched his career high with 26 points to help eighth-ranked Houston beat East Carolina 99-65 in a game that included multiple technical fouls against the Pirates and three ejections during a confusing second-half sequence.

"I think this late in the year, you don't get overly analytical one way or the other," Cougars coach Kelvin Sampson said. "You know your team by now. The strength of our team is our team. I've got a good team. I don't know that it's a great team.

"We've been able to beat just about everybody we've played."

Instead, the biggest challenge might have come from staying steady as tempers — all on the East Carolina side — flared, apparently in reaction to officiating.

It was early in the second half when coach Joe Dooley and sophomore guard Shawn Williams were ejected along with a fan during a stretch that had the home crowd irate with officials — and some throwing trash toward the court.

Dooley said it was the first time he had ever been ejected and was still irked by the officiating at the end of the game.

Houston: The Cougars are rolling through the AAC with 12 straight wins and the program's highest ranking since Hakeem Olajuwon was starring for Houston in 1984. They have matched last year's win total with three games left in the regular season.

"We're used to hostile environments," Davis said. "So we weren't really that worried (about safety), but it was definitely crazy for sure."

East Carolina: The Pirates had trouble slowing down the Cougars in the first half, then saw a double-digit deficit balloon as Houston went 7 of 9 on free throws during the technical-heavy stretch that basically stalled the game around the 17-minute mark. ECU has lost eight straight against top-10 opponents as well as in the series against Houston.

THE CALLS IN QUESTION

There was plenty of confusion with all the whistles — and afterward, too.

"There was a lot of people that don't know what happened," said Dooley, who added that "things went totally haywire" and described it as a "debacle."

An Associated Press reporter tried to speak with game officials as a pool reporter afterward to clarify what led to the technicals and ejections, but was denied access.

Dooley received a technical foul at the 17:56 mark, followed by senior guard Isaac Fleming picking up one of his own. Then came another for Dooley, who was ejected for the second technical and stormed out the door nearest the ECU bench.

Later, Williams picked up a flagrant-1 foul for a hard hit on Fabian White Jr. at the rim with 17:24 left. Pomeday said the officials then reviewed a replay and determined Williams tossed the ball into White's face as he was still on the ground after the foul, leading to a flagrant-2 call for the ejection.

ECU team spokesman Jody Jones said the decision to eject the fan during that sequence was made by arena security.

ECU: Plays at Tulsa on Sunday.