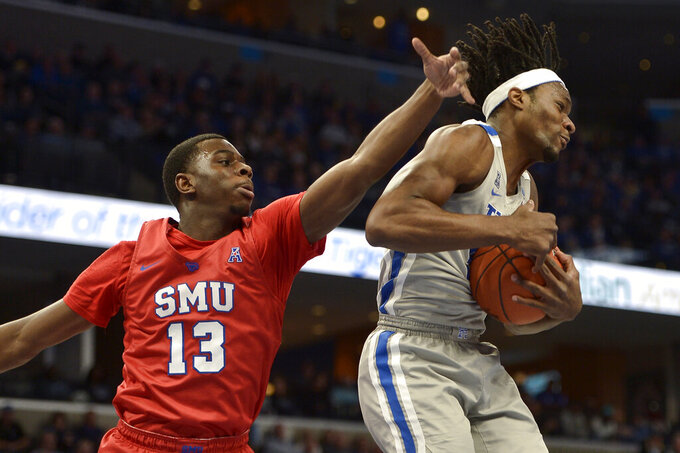 Isiaha Mike scored 13 points, all in the second half, and Tyson Jolly finished with 10 as the Mustangs (15-4, 5-2 American Athletic Conference) won their third straight.

D.J. Jeffries led Memphis (14-5, 3-3) with 18 points while Precious Achiuwa had 15 points and nine rebounds. The loss was the Tigers' second in a row and fourth in the last six.

The Mustangs, who trailed by as many as 12 points in the second half, finally overtook the Tigers with a 15-2 run, erasing a double-digit deficit for a 71-70 advantage. Memphis failed to score in the final 6 minutes.

The Tigers were able to build the lead to 11 points on several occasions in the first half but could never really stretch it beyond the double-digit advantage. Shooting 50% in the half helped, as did holding down turnovers.

SMU was stymied by 32% shooting from the field and trailed 41-32 at halftime. Davis’ 14 points in the first half kept the Mustangs close.

Achiuwa had 13 in the half to lead Memphis.

SMU: The first half saw the Mustangs, who shoot almost 47% from the field, struggle from the field at 32%, including 5 of 21 from 3-point range. Still, SMU trailed by only nine at the half. But the closing rally, keyed by Mike’s eight points, and free throws by Davis made the difference.

Memphis: The Tigers, which were trounced in their last game, at Tulsa, already had scored more points at halftime than they had in their whole game against the Golden Hurricane. But Memphis, which was favored by 5 1/2 points, couldn’t hold a 12-point lead in the second half and the six-minute drought at the end meant another loss for the Tigers.

SMU: Plays at Cincinnati on Tuesday.