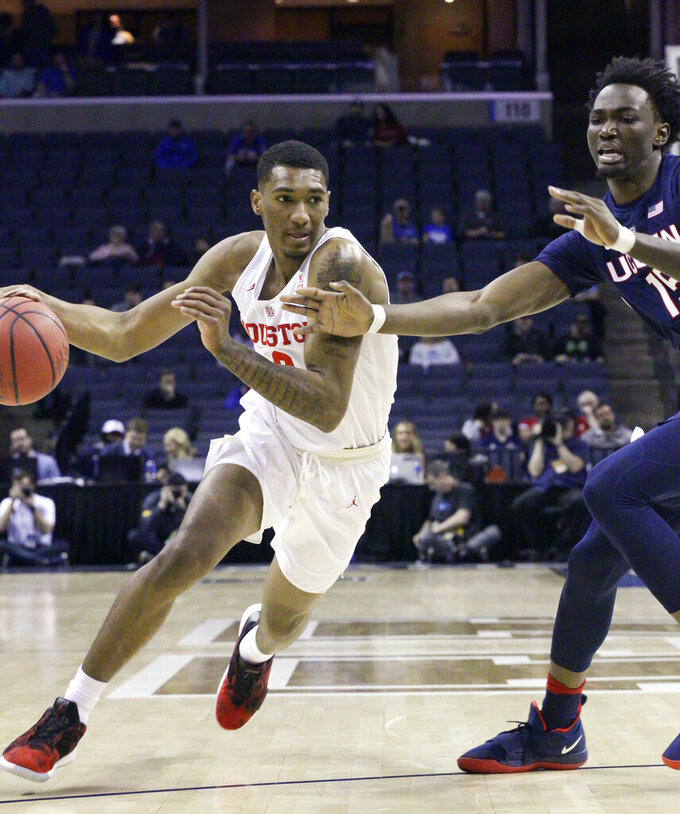 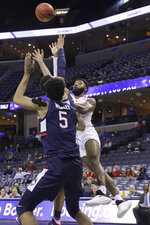 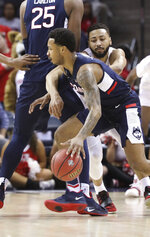 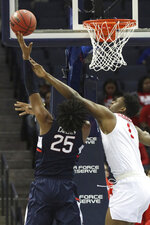 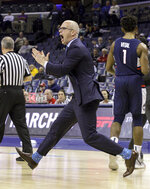 MEMPHIS, Tenn. (AP) — Houston wasn't satisfied with its 14-point halftime lead against UConn. The 11th-ranked Cougars' goal is not to let up for 40 minutes, and it showed against the overmatched Huskies.

Houston clamped down on defense, causing UConn to miss 11 of 13 shots to open the second half, and the Cougars went on to rout the Huskies 84-45 in the quarterfinals of the American Athletic Conference Tournament on Friday.

"We wanted to come out in the second half and be ultra, ultra, aggressive in everything — defense, rebounding," Houston coach Kelvin Sampson said. "When we did get the board, push it and play in transition.

Corey Davis Jr. scored 22 points to lead the Cougars, while Galen Robinson Jr. finished with 16 points, missing only one of his eight shots. Nate Hinton added 15 points for Houston, the tournament's top seed.

In the semifinals, Houston will face Memphis, a 79-55 winner Friday over UCF.

"It was just kind of the perfect storm," Huskies coach Dan Hurley said. "We were probably at our worst offensively, which had something to do with the level of defense that they brought."

Hurley added: "It was a tidal wave that hit us."

UConn, which had made 13 3-pointers in its 80-73 win in the opening round over South Florida, had no luck from outside. The Huskies were 3 of 26 from beyond the arc, including missing all 13 attempts after halftime.

"The key to defending their shooters was five people guarding the ball-screener, and all five people did their jobs," Sampson said, adding that Houston's defense forces shooters to drive the ball instead.

Eight minutes into the second half, the Cougars had made 11 of their 17 shots and stretched the lead to 32 points.

For Hurley, it was a bitter end to a season in which he thought UConn was making strides. The Huskies had won three of their four games in March before Friday's loss.

"A really tough end of the year where, you know, we felt like we were making progress," Hurley said. "And now, several, several months to stew over this and what happened."

Sampson said his team tries to maintain the same level of intensity no matter the opponent. Despite their ranking and their expectation of a high seed in the NCAA Tournament, the Cougars don't want to get lackadaisical about their success.

"If I had to find a way to describe it, it would be 'desperate,'" Davis said. "I mean, we have to have a sense of desperation. This is us playing to our culture. We treat every team the same, and we play our hearts out."

UConn: UConn reached the quarterfinals after an 80-73 victory over eighth-seeded South Florida, but a win over the Cougars would have been a tough task even had the Huskies not gone cold.

Houston: The tournament's top seed has a balanced offense and stifling defense. Houston held the Huskies to 26-percent shooting for the game.