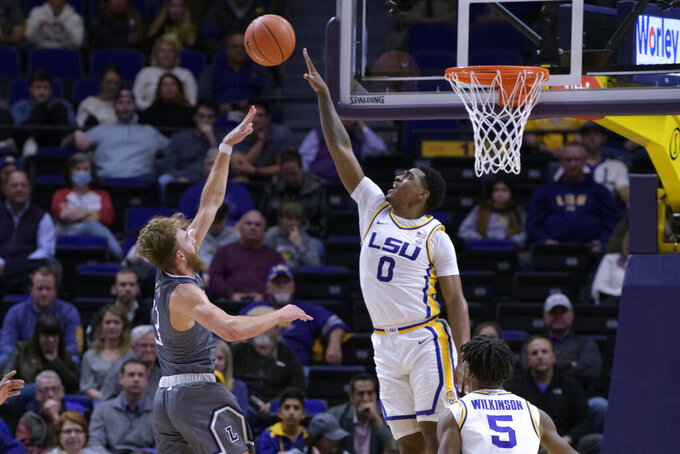 The Tigers’ offense took center stage Wednesday night in their 95-60 romp over Lipscomb.

LSU (12-0) shot 53% from the field, its highest mark in a month. The Tigers made 55% of their 3-points shots — their second-best outing from behind the 3-point line for the season.

Even with top scorer Tari Eason unavailable due to back spasms, LSU registered its second highest point total of the year. Six Tigers scored in double figures, with Darius Days the leader at 21 points.

Xavier Pinson scored a season-high 17 points for the Tigers, who never trailed. Eric Gaines had a career-high 13 points, Brandon Murray also had 13, Efton Reid had 12 and Mwani Wilkinson had a season-high 11.

Jacob Ognacevic led the Bisons (6-8) with 12 points. Lipscomb shot only 39% from the field and committed 22 turnovers.

LSU has one week to prepare for its Southeastern Conference opener at No. 12 Auburn. Days, the veteran on this LSU team, was concerned about making improvement in the next seven days.

“Coaches coach,” Days said. “Coach (Will Wade) always preaches a lot of things. We’ve got a lot to work on, definitely with the turnovers (14 against Lipscomb). It’s going to be crazy at Auburn. The turnovers will really hurt us there.”

Auburn was also on Wade’s mind following the lopsided victory.

“We’ve got to get a lot better heading into the SEC,” Wade said. “I like the way we moved the ball. We had six guys in double figures. That’s a positive. Twenty assists are a positive. But, we’re going to have to be much better than what we’ve been to go into Auburn and give ourselves an opportunity to win.”

Hot outside shooting propelled LSU to a 48-24 halftime lead. The Tigers were 8-of-16 on 3-points in the opening 20 minutes. Days knocked down four 3-pointers.

The Tigers dominated the first half except for one five-minute stretch when it failed to score. Sparked by Days’ first two 3-pointers, LSU jumped out to an 18-5 lead five minutes into the game. The Tigers then experienced their drought which enabled the Bisons to reduce their deficit to five points.

LSU extended its lead to 30 in the first three minutes of the second half.

“We knew it was going to be tough,” Lipscomb coach Lennie Acuff said. “They’re leading the country in field goal defense. Then, they are shooting 30% from 3 and they go 8 of 16 in the first half. It’s been a tough stretch with the schedule and guys being hurt, but we’re not going to make excuses.”

LSU had won its first 11 games of the season even though Days was struggling with his outside shot — he was just 8 of 43 from behind the arc over the past eight games. Days’ outside shot returned against Lipscomb, as he made five of his eight 3-point shots. Led by Days, the Tigers matched their season-high in 3-pointers with 12. Pinson was 3 of 6 on his 3-pointers.

Both Lipscomb and LSU had their best player on the sidelines Wednesday. Lipscomb's Ahsan Asadullah missed his eighth consecutive game due to a leg injury. Asadullah averaged 17 points and 9.8 rebounds in the Bisons’ first six games.

Eason suffered back spasms in warmups and was held out.

Lipscomb: The Bisons have lost six of their last seven games without injured top player Ahsan Asadullah. The only Lipscomb victory in that stretch came against Tennessee Wesleyan, a non-Division I team.

LSU: For the first time in 22 seasons, the Tigers will be undefeated heading into their SEC opener. The 1999-2000 team also had a 12-0 record in pre-conference play. That LSU squad began the SEC slate with a victory against Alabama before losing to Tennessee.

LSU: Plays at Auburn in its SEC opener next Wednesday.