Days rallies No. 25 LSU past Missouri to end 2-game slide 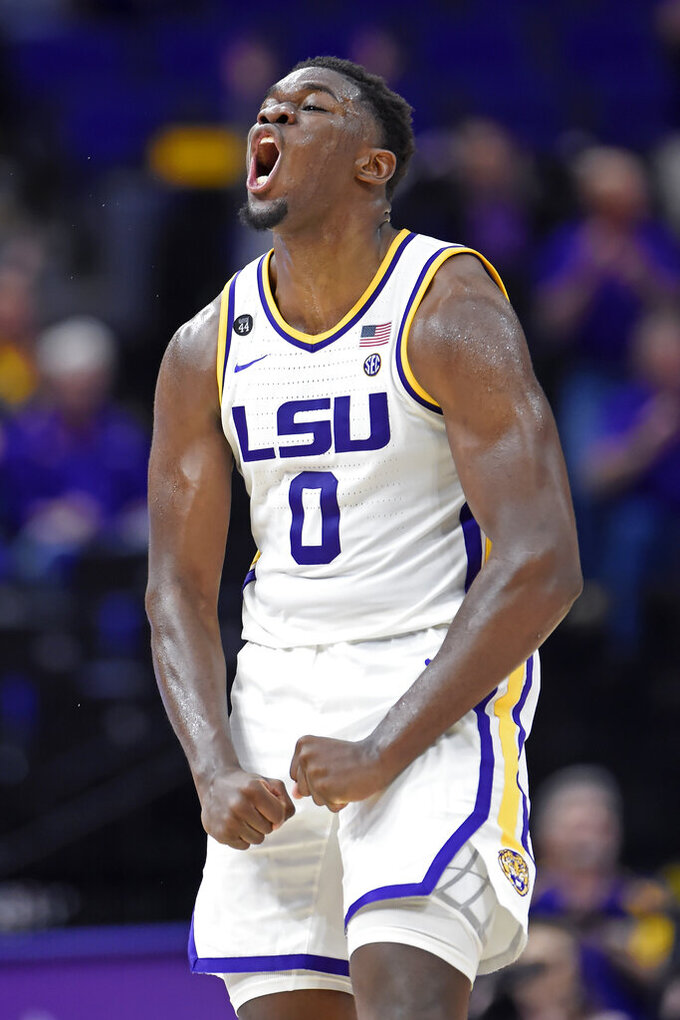 Darius Days scored seven of his 20 points in the final five minutes as No. 25 LSU rallied to beat Missouri 82-78 on Tuesday night to win its sixth Southeastern Conference game by four points or fewer.

With LSU leading 76-73, Days made a short shot following an offensive rebound with 25 seconds left. After Missouri again got within three on Xavier Pinson's basket, Days made two free throws with 11 seconds left.

Skylar Mays led LSU with 23 points. Days also had 10 rebounds. Smart had 15 points, while Trendon Watford and Emmitt Williams each had 11.

“Missouri deserves the credit,” Mays said. “They’re a great defensive team. They made us play a lot of one-on-one and we play our best basketball when we can get the ball moving and attack closeouts. But, we were able to figure it out and score enough points to win.”

Dru Smith led Missouri with 20 points. Reed Nikko matched his career high with 13 points, while Javon Pickett and Mitchell Smith each had 10 points.

Missouri led LSU for nearly the entire first half. LSU had just five field goals in the first 16-plus minutes. Missouri's defense and rebounding provided a 12-point advantage three times.

“I’m not sure we got gassed,” Missouri coach Cuonzo Martin said. “It was a case of playing against a good team and the room for error is very slim. Everything counts. We had the ball in a couple of guys’ hands in vulnerable situations for those particular guys. Other than that, I thought we battled.”

Over the last 3½ minutes before halftime, LSU made five field goals – two by Williams and Watford and one by Mays. Watford’s layup at the buzzer left LSU behind Missouri 43-37 at the half. Missouri made seven 3-pointers, while LSU was 0-for-9 behind the arc in the first 20 minutes.

Missouri appeared to have weathered one LSU run when it took a 64-56 lead just past halfway through the second half. However, LSU clamped down on defense and held Missouri to just three field goals over nine minutes. Nikko made two baskets and Javon Pickett one as LSU outscored Missouri 20-7 to lead 76-71. Missouri missed seven of 10 attempts during that stretch.

Skylar Mays, who scored 30 points on Saturday but couldn’t quite pull out the victory for LSU at Auburn, kept his team in the game against Missouri. Mays was 7 of 11 from the field and 8 of 9 from the foul line. Mays scored eight points in the first five minutes of the second half as LSU erased Missouri's six-point halftime lead. Mays’ field goal with 5:23 remaining tied the score at 69, and his twisting layup gave LSU a 76-71 lead in the final two minutes.

Missouri: The Tigers dropped their sixth consecutive SEC road game this season. The average margin of defeat for Missouri in the previous five losses had been 18.4 points.

LSU: The Tigers ended a two-game losing streak and remained tied for first place in the SEC with No. 12 Kentucky, which won at Vanderbilt. Auburn can make it a three-way tie for the SEC lead by defeating Alabama on Wednesday.