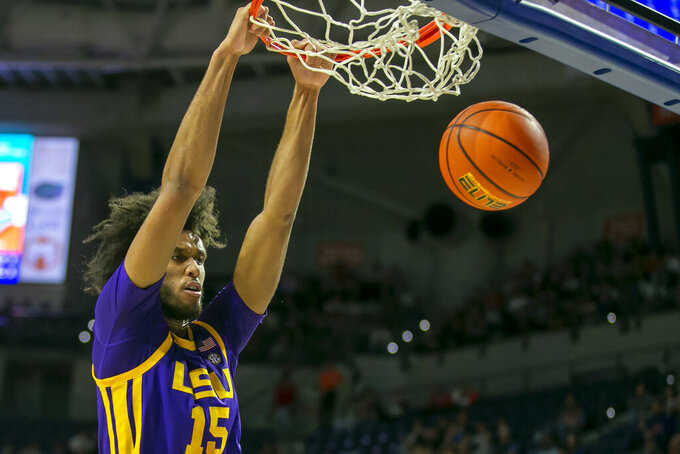 GAINESVILLE, Fla. (AP) — Darius Days was mostly miserable during his last two trips home to play in front of friends and family members. He struggled, and LSU lost.

He tried to relax a little more this time around and ended up giving dozens of his fans who made the short trip north plenty of reason to cheer.

Days scored 20 points about 25 miles up the road from his hometown, Eric Gaines added 15 in his second start of the season and No. 12 LSU edged Florida 64-58 on Wednesday night.

“I told him in the locker room, ‘You must have been saving it all up for this one,’" LSU coach Will Wade said. “This has been a tough place for him to play.”

Days made nine of 14 shots — hitting six more than he did during his last two games in Gainesville — and was a one-man show for stretches. It was a much-needed performance because the Tigers (15-1, 3-1 Southeastern Conference) played without starting point guard Xavier Pinson (sprained knee) and had two big men foul out long before the game was decided.

“Everybody played their behind off," Days said.

Gaines came up big, too, scoring eight points in the second half and going 4 of 5 on free throws down the stretch in place of Pinson.

“Give our guys credit, man," Wade said. "We’re a tough out. We’ve got guys that step up and come through for us. … We just dug it out there. We didn’t have our normal lineups in there; we had lineups in there we’ve never practiced with. Our guys just found a way.”

“We have to get this thing going,” Florida coach Mike White said. “We’ve proven to be capable. This team hasn’t handled adversity very well. We've got to get some type of mojo back.”

LSU dominated Florida down low, outscoring the Gators 42-26 in the paint. And the Tigers did that without much help from big men Tari Eason and Efton Reid.

Eason picked up his fifth foul on a charge with a little more than 14 minutes to play, and Reid joined him on the bench with 7:16 remaining. Reid picked up three fouls in the first half and was called for a fourth in the opening minute of the second.

Florida’s biggest issue was at the free throw line. The Gators missed 11 from the charity strip, including seven of nine down the stretch.

“There’s not 10 minutes that go by in practice without us stopping and do a free throw drill,” White said. “We’ll continue to do it. We might change up the drill.”

LSU led by 14 in the first half, but Florida whittled it to two several times in the final minutes. Anthony Duruji, Myreon Jones and Brandon McKissic each missed a pair of free throws in crunch time.

“The thing is, you’re talking about good shooters here,” White said. “It’s obviously mental. ... We’ve got to get mentally tougher.”

LSU: The Tigers entered with the nation’s fifth-best scoring defense, giving up 56.4 points a game, and that figure won't change much after another stout defensive performance that included five blocks and eight steals.

Florida: The Gators opened league play with a daunting schedule that included three ranked teams: Alabama, Auburn and LSU. They were close at times in all three but were doomed by lengthy scoring droughts.

Florida guard Niels Lane did not play and was not on the bench. A team official said Lane’s absence was a coach’s decision. Lane, a sophomore, has played in just seven games this season and has nearly as many turnovers (7) as points (8).