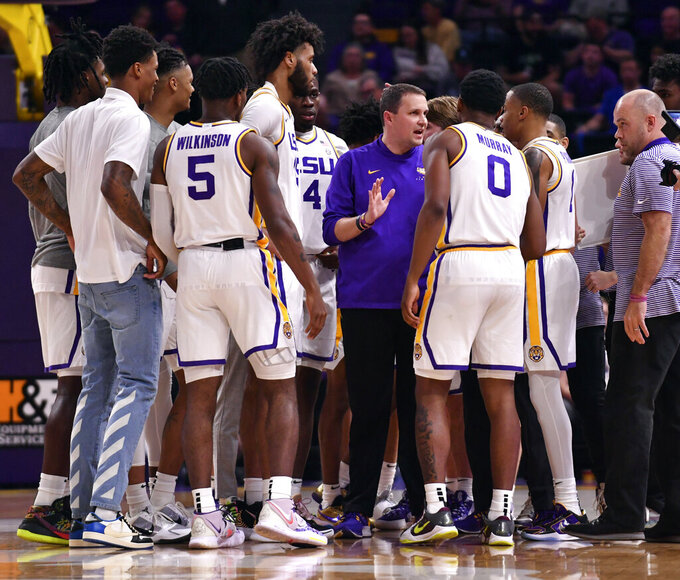 LSU head coach Will Wade speaks with his players during a timeout against Louisiana-Monroe in an NCAA college basketball game Tuesday, Nov. 9, 2021, at the LSU PMAC in Baton Rouge, La. (Hilary Scheinuk/The Advocate via AP) 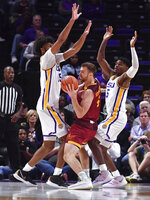 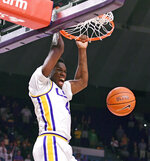 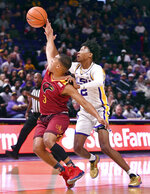 BATON ROUGE, La. (AP) — Darius Days made eight 3-pointers on his way to a career-high 30 points and LSU beat Louisiana-Monroe 101-39 in a season opener Tuesday night.

Days, the Tigers' lone returning starter who averaged over 11 points per game and shot 52% from the arc last season, made 8 of 9 3-point attempts and 11 of 13 overall in 22 minutes. He opened the game with a dunk, followed with four straight 3-pointers and made three more in a 30-3 run over the final eight minutes of the half for a 52-20 lead.

Freshman Efton Reid added 16 points, Missouri transfer Xavier Pinson and Eric Gaines each had 10 points and seven assists. Illinois transfer Tari Eason grabbed 10 rebounds to go with 11 points. The Tigers dominated in all facets, shooting 53% including 12 of 29 from the arc, scoring 38 points off 25 ULM turnovers and outrebounding the Warhawks 47-26.

The Tigers have averaged over 80 points per game over the three previous seasons. Last season, the Tigers were 19-1 when Days scored in double figures.

With 28.1 seconds left, Bradley Ezewiro dunked for LSU's final points but took a hard foul after landing on the Warhawks' Thomas Howell who was assessed a flagrant-2 technical foul while several LSU players were ejected for leaving the bench in the aftermath.

The 62-point margin of victory tied for the fourth-largest in LSU history.