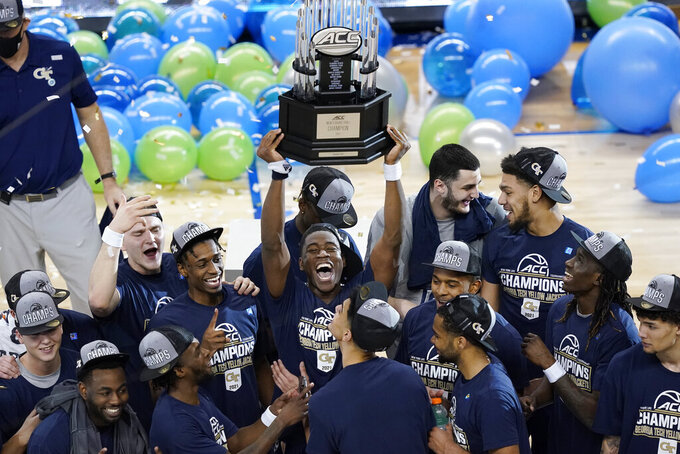 Georgia Tech players hold the trophy as they celebrate their 80-75 win over Florida State in the Championship game of the Atlantic Coast Conference tournament in Greensboro, N.C., Saturday, March 13, 2021. (AP Photo/Gerry Broome) 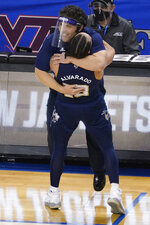 GREENSBORO, N.C. (AP) — Jose Alvarado couldn't contain his emotions as the horn sounded, collapsing in disbelief as his Georgia Tech teammates mobbed each other near midcourt.

“Coach, you’re a champion, man!” Alvarado yelled as he joined him for a postgame TV interview amid fallen-from-the-rafters balloons and confetti.

“A lot of emotions: joy, happiness, everything,” said Michael Devoe, the tournament MVP. “I mean, this goes down in history for us.”

Devoe scored 20 points for the fourth-seeded Yellow Jackets (17-8), who shot 52% after halftime and repeatedly capitalized on mistakes by the Seminoles to win their first ACC Tournament crown since 1993 and fourth overall.

ACC player of the year Moses Wright and Jordan Usher each had 11 of their 15 points after halftime for Georgia Tech, which got off to an 0-2 start this season with home losses to Georgia State and Mercer. The Yellow Jackets stood 9-8 after a loss at Clemson on a last-second shot Feb. 12 to find themselves facing bubble uncertainty.

But they haven't lost since. And there's no doubt about the NCAA tourney now after a remarkable climb, not after a strong finish against the second-seeded Seminoles (16-6).

“Our guys have just scrapped, fought, kicked, clawed — whatever they had to do to find a way to get wins this year,” Pastner said. “And I'm just so darn proud of these young men.”

Scottie Barnes had 21 points on 8-for-10 shooting for Florida State, which shot 56% but committed 25 turnovers that led to 31 points for the Yellow Jackets.

They came in all kinds of ways, from the Seminoles bobbling catches and having passes deflected to just throwing balls straight out of bounds. The 25 turnovers fell one shy of tying a tournament title-game record since the league began tracking the number in 1961, while Georgia Tech’s 15 steals — five by Alvarado — was a title-game record since the league began charting it in 1976.

“We did turn the ball over a couple of times ourselves, what we call self-inflicted turnovers,” FSU coach Leonard Hamilton said. “But for the most part, I think that they forced us into turnovers. ... I want to give them credit because they did an unbelievable job of just stripping us from the ball, and their defense created a mindset with us where we were unsure as to what we were supposed to do."

The Yellow Jackets avoided such trouble with just seven turnovers. But they were particularly steady down the stretch, making six of eight shots over the final eight minutes as well as 11 of 12 free throws in the final 90 seconds.

That included Alvarado knocking down a pair with nine seconds left after shaking off a hard fall, which had come right after Barnes’ 3 pulled the Seminoles to 76-73.

The only thing that didn’t go according to plan was the Yellow Jackets’ celebration. Alvarado stripped RayQuan Evans and fed Devoe for a layup with 0.6 seconds left, but the Georgia Tech players began spilling onto the court early to celebrate. That led to a technical foul and two free throws for FSU, though the outcome was decided and the Georgia Tech party had begun.

Pastner kept that face shield in place, too, even as he stood atop a ladder — socially distanced from his team below — and cut down the final strands of net.

It was an unusual final pairing in a tournament altered by the coronavirus pandemic. No. 16 Virginia and Duke withdrew after positive COVID-19 tests within their programs. The title matchup marked the second finale without a North Carolina-based team, the other being Georgia Tech’s win against Virginia in 1990.

Now the Yellow Jackets finally have another.

Georgia Tech: The Yellow Jackets had won seven straight, including Thursday against Miami in the quarterfinals. Then their semifinal matchup with the Cavaliers was canceled to give them an unexpected off day before the final. They didn't shoot well from outside (5 for 23 on 3-pointers) but still won in their first title-game appearance since 2010.

Florida State: The Seminoles had a delayed tournament debut when their scheduled quarterfinal against the Blue Devils was called off, but they pushed past North Carolina in Friday’s semifinals by locking down defensively in the final four minutes to close it out. They found themselves in another tough finish despite all the turnovers, though this time they couldn't keep the Yellow Jackets from getting to the line or scoring timely baskets.

Both the Seminoles and Yellow Jackets will find out their NCAA Tournament seeding Sunday.