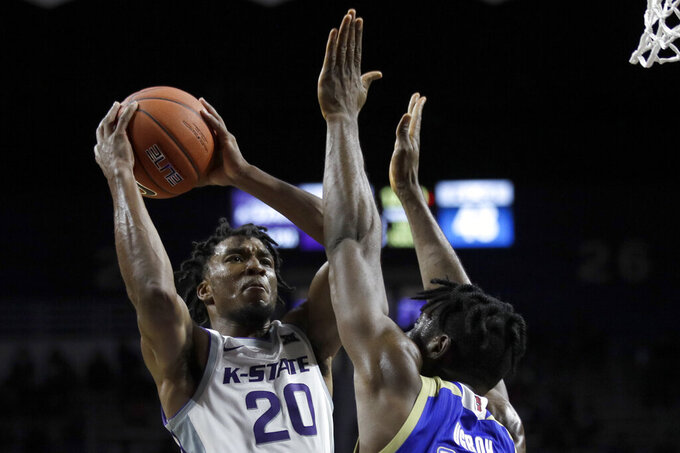 MANHATTAN, Kan. (AP) — Cartier Diarra finished with a career high 25 points to lift Kansas State over Tulsa in a 69-67 thriller on Sunday night.

Xavier Sneed scored 18 in the win over the Golden Hurricane, but the Wildcats struggled from the field all game shooting 38% from the floor.

It was the first time this season that Tulsa was defeated when the opponent was held to under 40% from the floor.

Overall, the Golden Hurricane were balanced in the box score with every player who checked in recording a bucket but fell just short in the game. Tulsa managed to post a higher shooting percentage than Kansas State shooting 43% from the floor.

The Golden Hurricane (8-5) bench led by 10 points from Darien Jackson scored 24 points to help keep Tulsa in the game.

“I think out strength is in our numbers and I thought out guys came in a sprayed the ball around a little bit and we’ve got a number of guys who can score so it was good to see,” Tulsa coach Frank Haith said.

Diarra hit a crucial 3-pointer in the late seconds of the game and finished with a team-high seven assists and five rebounds.

“Players make good coaches,” Weber said. “The other Xavier Sneed got a much better look and it didn’t go in, This time Cartier makes a step back three and it helps us get a win,” said Kansas State coach Bruce Weber.

The Wildcats struggled in the early moments of the game but managed to bounce back with several 3s.

Tulsa dominated the paint outscoring the Wildcats 32-20, but the Wildcats outrebounded the Golden Hurricane 40-36.

“We did a better job as the game went on and protected the paint,” Weber said.

The Wildcats still struggled inside but big man Makol Mawien got into the mix with three crucial blocks.

Tulsa: The Golden Hurricane jumped out to an early lead but simply failed to pull away the entire game. Tulsa got plenty of help from the bench but fell just short.

Kansas State: The Wildcats hit 3s in crucial moments of the game despite a slow start.

Tulsa: The Golden Hurricane will open conference play at home against Temple on Friday.

Kansas State: The Wildcats will begin conference play on the road against Oklahoma on Saturday.