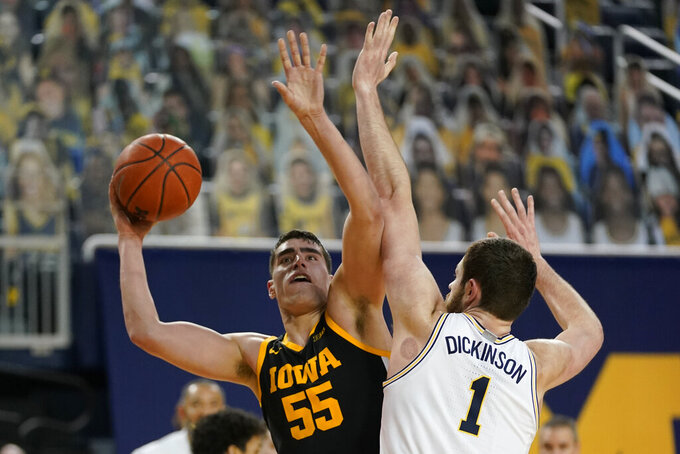 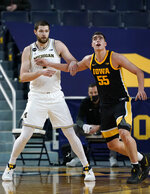 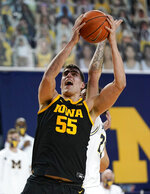 Then, when Dickinson left the game for a bit with three fouls, his teammates took control.

Dickinson gave Garza fits around the basket, and Franz Wagner scored 21 points to lead No. 3 Michigan to a 79-57 victory over No. 9 Iowa on Thursday night. Garza’s three-point play early in the second half put the Hawkeyes up 37-36 — and drew Dickinson’s third foul. Michigan answered that with a 14-2 run that took place mostly while Dickinson was on the bench.

Dickinson more than held his own against Garza in a much-anticipated matchup of two standout big men who have known each other for years. The Wolverines (17-1, 12-1) passed yet another test against a highly ranked opponent, and they look increasingly alone atop the Big Ten, where every other team has at least four conference losses.

Garza led the Hawkeyes (17-7, 11-6) with 16 points, but he shot 6 of 19 from the field. The 7-foot-1 Dickinson, who like Garza went to high school in the Washington area, blocked Garza's first shot attempt of the game. Even when Garza got the ball in good position in the post, he had a hard time scoring consistently.

“I know I’ve got to be better for my team,” Garza said. “For some reason, there was just a lid on the rim for me tonight.”

Michigan became the first team to hold the Hawkeyes under 65 points all season.

The Wolverines led 32-29 at halftime, then went on their run after Dickinson's third foul. Dickinson returned to cap that run with a layup that made it 50-39.

“Tonight was a battle,” Dickinson said. “I’m still tired after that game.”

Isaiah Livers scored 16 points for the Wolverines. Dickinson added 14 in addition to all his fine defensive work.

“As you see, we didn’t try to double-team," Livers said. "Game plan was for Hunter to guard him one on one, and for us to stay home to the shooters.”

Michigan was coming off a 92-87 win over No. 4 Ohio State last weekend. This game was more tedious at the start, but the Wolverines never seemed to grow frustrated.

Iowa: There were some positives for the Hawkeyes in the first half. Their defense — thought to be a weakness — kept Michigan mostly under control in the first 20 minutes. Iowa has some health concerns, though. Jack Nunge was injured in the first half and walked off with some assistance. In the second half, Connor McCaffery went down with what appeared to be a left foot injury.

Coach Fran McCaffery said Nunge would have an MRI, and the team hopes Connor MacCaffery can be ready for its next game.

Fran McCaffery said his team needs to do a more consistent job defending.

“I think what we have to do is I think a better job of locking in defensively when we have a few shots roll out on us,” he said.

Michigan: Dickinson, a freshman, acquitted himself well against Garza. The Wolverines turned what looked like a matchup of heavyweights into a rout — and that's also what they've done in the Big Ten standings so far.

Garza scored 44 points in a loss at Michigan last season, but Thursday was a far cry from that performance. Howard said he suspects the Wolverines will see Iowa again, and Garza will make adjustments.

“It’s not easy guarding Garza. He’s a talent. This guy has a chance to be the player of the year this year,” Howard said. “I’m so proud of the effort that our guys gave.”

The Hawkeyes as a team had only four, which said a lot about how Michigan defended.

At this point, Michigan might be able to lose a game without dropping. The No. 4, 5, 6 and 7 teams all have six losses. Iowa may drop out of the top 10 — but the Hawkeyes do have another chance this week to earn a marquee win.

Iowa: The Hawkeyes face another top-five opponent when they play at Ohio State on Sunday.

Michigan: The Wolverines have only one day off before playing at Indiana on Saturday.