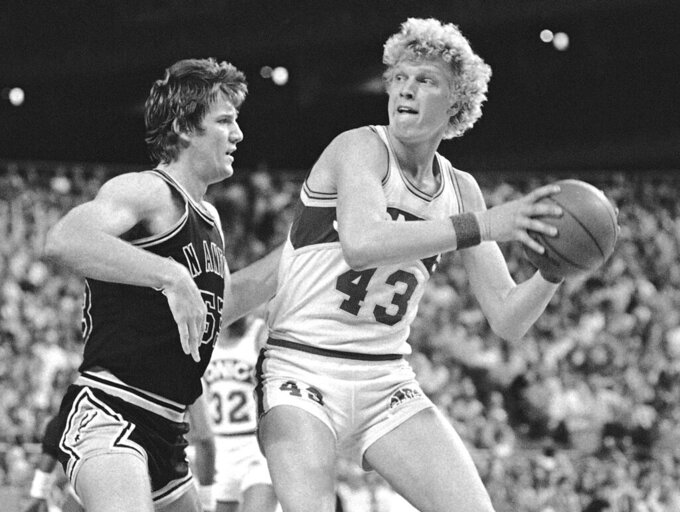 FILE - In this May 6, 1982, file photo, Seattle Supersonics' Jack Sikma, (43) turns towards the basket to shoot as San Antonio Spurs' Mark Olberding defends during an NBA playoff basketball game in Seattle. NBA stars Vlade Divac, Sidney Moncrief and Jack Sikma are the headliners of the 2019 class for the Basketball Hall of Fame. The honorees were announced Saturday, April 6, 2019, in Minneapolis before the Final Four. (AP Photo/Gary Stewart, File) 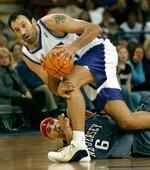 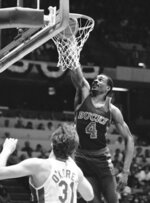 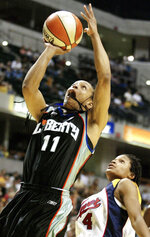 MINNEAPOLIS (AP) — The longest active streak of missing the NBA playoffs belongs to Sacramento, where general manager Vlade Divac has been trying to return the Kings to the league's elite over the last four seasons.

Back when the slick-passing Serbian big man was in the paint, the Kings had quite the run. For his impact on the NBA as one of the pioneering Eastern Europeans, Divac was announced Saturday as one of the 12 honorees in the 2019 class of the Basketball Hall of Fame.

"We created something special there, the first day of training camp that led us," said Divac, who played for Sacramento from 1998-2004, with a peak in 2002 when the Kings lost to the Los Angeles Lakers in overtime of Game 7 of the Western Conference finals. "For six years, we were the most exciting team in the league and really played basketball the right way."

Divac, who was elected directly by the international committee, played 16 years in the NBA, including eight with the Lakers. The 7-foot-1 Divac had his jersey retired by the Kings after helping them start a streak of eight straight postseason appearances upon his arrival. They never advanced past the conference finals, a surge that coincided with the Lakers dynasty of Kobe Bryant and Shaquille O'Neal.

One of Divac's fellow starters on those Kings teams was Chris Webber, who wasn't included in the class. Now an analyst for CBS Sports, Webber quickly sent Divac a congratulatory message after the announcement in Minneapolis at the Final Four.

"For the last five or six days when I found out I was going to be there, I was only hoping that he was going to be next me," Divac said. "I'm sure it's going to happen down the road, but it would be awesome if he was right next to me."

Moncrief and Sikma, who were elected by the North American committee, were teammates with the Milwaukee Bucks from 1986-89. The seven-time All-Star Sikma, who won an NBA title in his second season with the Seattle SuperSonics, set a record with the Bucks in 1988 as the only center in history to lead the league in free-throw percentage at 92.2. Sikma is now a consultant with the Toronto Raptors, who are in second place in the Eastern Conference behind the resurgent Bucks.

"My hope is we get in the conference finals and we're facing the Bucks, and then I'll kind of keep my thoughts to myself a little bit," Sikma said, smiling.

Moncrief was a five-time All-Star and two-time NBA Defensive Player of the Year in the mid-1980s for the Bucks, who lost in the Eastern Conference finals three times during his career. Moncrief also reached the Final Four in his final season at Arkansas, 1978-79, under coach Eddie Sutton, for whom he gave credit for instilling in him the fundamentals that carried him to professional success.

"You'd take a four-hour practice: three hours on defense. Seriously," Moncrief said. "And they wonder why I couldn't shoot when I got to the NBA! I didn't shoot. I just played defense."

Weatherspoon, who was elected by the women's committee, was a five-time WNBA All-Star for the New York Liberty who was the first in the league to reach 1,000 points and 1,000 assists. She led Louisiana Tech to an NCAA championship in 1988.

Jones and Westphal were the other players elected by the North American committee. Jones was an eight-time NBA All-Defensive first team pick and four-time All-Star with the Philadelphia 76ers, winning a title with them in 1983. Westphal was a five-time All-Star who won a championship with the Boston Celtics in 1974.

Fitch coached in the NBA for 255 seasons, leading the Celtics to a title in 1981 and still holding the franchise's best winning percentage at .738. The other election by the North American committee was the Tennessee A&I teams that won NAIA championships in 1957, 1958 and 1959. The program now known as Tennessee State was the first to win three straight titles in any college division.

Attles was a direct election by the contributor committee. He played for the Philadelphia Warriors from 1960-71 and later was a coach, executive and ambassador for the organization. Cooper, who died in 1984, was directly elected by the early African American pioneers committee. He was an All-American at Duquesne in 1950 and the first African American player drafted by an NBA team. Braun, directly elected by the veterans committee, died in 2010. He was a five-time NBA All-Star who won a title with the Boston Celtics in 1962.

Wayland Baptist, elected directly by the women's veterans committee, was among the first women's programs to award scholarships. Under the guidance of coach Harley Redin, the small school in West Texas won 131 straight games from 1953-58 and 10 national championships overall.