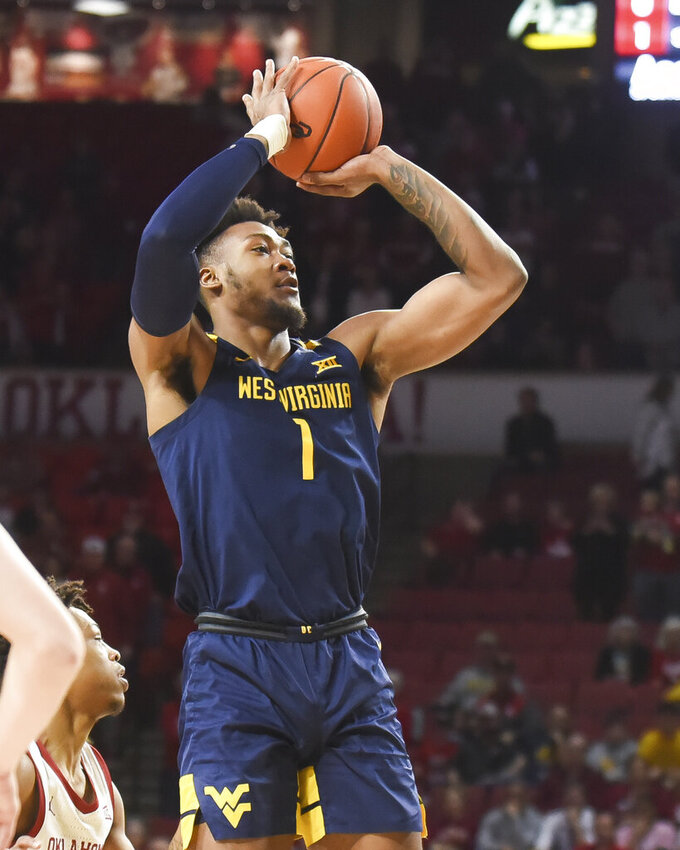 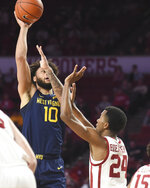 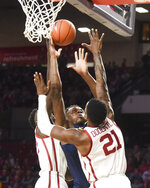 The Sooners needed it Saturday and Doolittle delivered, scoring 27 points and grabbing 12 rebounds as Oklahoma knocked off No. 13 West Virginia 69-59 at home Saturday.

Doolittle hadn’t scored in double figures in three weeks but it didn’t take him long to get going on the offensive end against the Mountaineers.

Early on, it was at the free-throw line as the Sooners fought to hang in the game even as West Virginia dominated the boards early.

But then Oklahoma’s lone senior really got going.

In a 17-2 first-half run that lifted the Sooners from a deficit to a 10-point lead in a six-minute span, Doolittle scored eight points.

He hit two 3-pointers in that stretch, his first makes from behind the arc since Jan. 14.

“People weren’t guarding me,” Doolittle said. “It got to a point where it’s like, ‘I might as well shoot.’ Then when you start making them, they have to game plan you a lot differently.

“It makes the game a whole lot easier when you’re a threat from deep.”

The Mountaineers have been known for their pressure defense since Bob Huggins arrived but this year it hasn’t been as big of a part of their defensive plan.

“We are not very good at it or we would do it more,” Huggins said.

Doolittle said his confidence was elevated from the start.

“If I was open, just shoot it regardless if I was going to make it or miss it,” he said. “Just to have a next-shot mentality. I feel like that was in my head the past few games but (with) the confidence that the coaching staff and my teammates instilled in me, I was able to come out here with a fresh mind.”

With Doolittle in a funk, Oklahoma had leaned heavily on Brady Manek on the offensive end.

Manek had a rough go of it against West Virginia, shooting just 1 of 6 from inside the 3-point line to finish with 11 points.

For the second consecutive game, Huggins wasn’t happy with his team’s performance.

Wednesday against Iowa State, it was the Mountaineers’ poor free-throw shooting that irked Huggins.

Against Oklahoma, it was his team’s inability to finish at the rim.

West Virginia was just 11 of 31 on layups in the loss.

“Seems impossible, but we missed 22 shots within two feet of the basket,” Huggins said.

West Virginia shot a season-worst 31.6% from the field. Before hitting five consecutive 3-pointers to end the game, the Mountaineers were 1 of 10 from beyond the arc.

Oklahoma: While the Sooners’ NCAA Tournament resume was solid but not spectacular heading into the game, they were in desperate need of a signature win. Oklahoma is in the midst of a stretch where they play six of eight games against teams either ranked or one spot out of the poll. The win was the first for the Sooners against a ranked opponent this season.

West Virginia: The Mountaineers dropped to 1-3 on the road in Big 12 play. West Virginia remains solidly in the NCAA Tournament field but they’re entering a rough week on the schedule, with No. 1 Baylor on the road after a midweek home game against No. 3 Kansas.

West Virginia came into the game No. 4 nationally in rebounding margin, leading the Big 12 and averaging more than nine more rebounds per game than its opponents.

Oklahoma was No. 264 in the country and next-to-last in the league in the category.

West Virginia dominated the boards early, outrebounding the Sooners 14-7 in the first 9:35 of the game.

But after that, Oklahoma turned things around, outrebounding the Mountaineers 35-27 the rest of the way to beat West Virginia on the glass, 42-41.

It was just the fourth time this season West Virginia had been outrebounded.

Oklahoma hosts Iowa State on Wednesday. The Sooners fell 81-68 at the Cyclones on Jan. 11. Oklahoma hasn’t beaten the Cyclones since 2018.