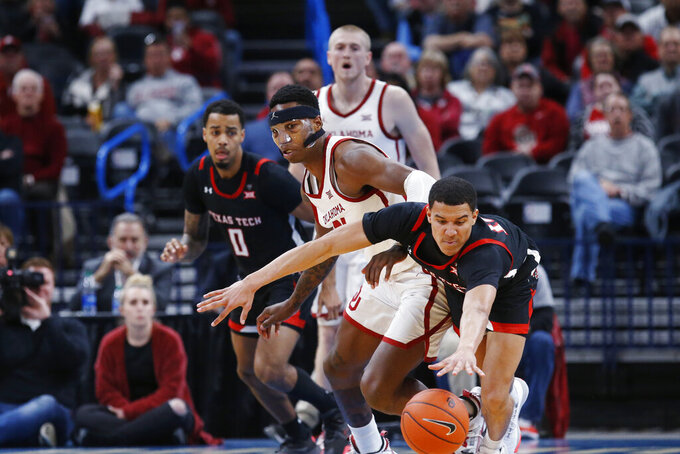 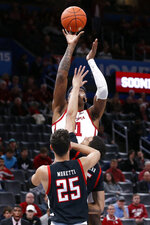 OKLAHOMA CITY (AP) — Oklahoma provided a much-needed boost to its NCAA Tournament resume with a 65-51 win over No. 22 Texas Tech on Tuesday night at Chesapeake Energy Arena.

“Guys understand where we stand," Oklahoma coach Lon Kruger said. “There are 30 or 40 teams that are in the same position as we are right now.”

Doolittle wore a mask after suffering a broken nose Saturday against Oklahoma State. It did little to slow him down as he made 9 of 15 shots and added seven rebounds.

Texas Tech guard Jahmi’us Ramsey, who entered the game averaging a team-leading 16.3 points, was scoreless and missed all eight shots.

“They stayed with him possession after possession and didn’t want to give him anything easy that could get him started," Kruger said.

Texas Tech was coming off a 30-point win at Iowa State and had won five of six, but the Sooners held the Red Raiders to a season-low 51.

“We played like a frustrated basketball team tonight,” Tech coach Chris Beard said. “When our shots were not going in early, I felt like we began to press. There are lot of ways to win basketball games when you don’t shoot well, but we didn’t do well creating other opportunities."

The Sooners opened a 14-4 lead in the opening five minutes. Jalen Hill scored five straight points, and Oklahoma's advantage grew to 21-6 just past the midway point of the opening 20 minutes. The Sooners led 32-22 at the break.

“I thought we came out attacking,” Kruger said. “The guys moved the ball, shared the ball — especially through the first half.”

Oklahoma built its cushion to 18 in the second half. Tech scrambled and cut the lead to 10, at 54-44, on McCullar's driving layup with 3:39 to play. But the Red Raiders got no closer.

HOME AWAY FROM HOME

The Texas Tech-Oklahoma game was the first Big 12 regular-season contest played in a NBA arena since the conference began play in 1996. It also was the Sooners’ first Big 12 home game played away from the Lloyd Noble Center in Norman, about 22 miles from downtown Oklahoma City. The Sooners are 16-6 all-time at Chesapeake Energy Arena.

Tuesday’s game was the second between Oklahoma and Texas Tech to be played in Oklahoma City. The teams met in 1944 in the All-College Tournament – once one of the nation’s top holiday hoop events – with Oklahoma winning 61-31.

The Sooners are 2-0 at Chesapeake this season and improved to 7-1 there under Kruger.

Texas Tech: The loss isn't too bad. It's a road loss against an NCAA Tournament-caliber team. But the way the Red Raiders lost could be a concern.

Oklahoma: The Sooners bounced back from a disappointing loss at Oklahoma State in dramatic fashion. Two of the three losses during the skid were to then-No. 3 Kansas and then-No. 1 Baylor.