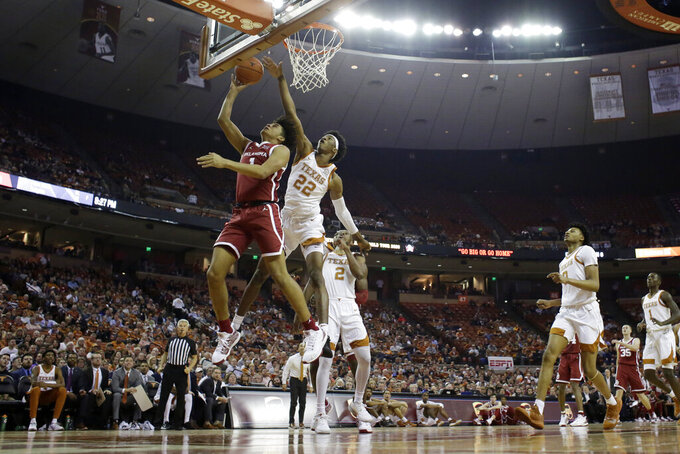 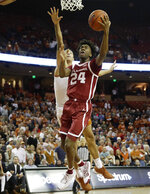 AUSTIN, Texas (AP) — Oklahoma's Kristian Doolittle has had some big games on Texas' home court but always came away without a victory.

The Sooners' senior finally walked off a winner.

Doolittle scored 22 points and Oklahoma pulled away from Texas late for a 72-62 win Wednesday night that snapped the Sooner's four-game losing streak on their rival's home court.

“I'll cherish this one,” said Doolittle, who had a breakout game here as a freshman three years ago with 29 points in a loss. “The rivalry game means a lot to me. Just being from Oklahoma, it’s always been Horns Down from where I’m from.”

The Sooners (11-3, 2-0 Big 12) seized control with an 11-2 run that built a 61-53 lead with just over five minutes to play. De'Vion Harmon capped the burst with a three-point play off a driving layup when he blew past a defender for an off-balance shot.

Doolittle later hit a long 3-pointer that put the Sooners up by 11 with 5 minutes left.

“The rims are soft,” Doolittle said with a smile.

Texas (10-4) fell to 0-2 in the Big 12 for the first time under coach Shaka Smart and the first time since 2014. Texas rallied that season to finish third in the league but hasn't finished that high since then. Smart's teams have finished no higher than fourth and the Longhorns have missed the NCAA Tournament two of the last three seasons.

Jericho Sims had his third straight double-double for Texas with 12 points and a game-high 15 rebounds. But Texas did little to run its offense through him, putting up 29 3-pointers instead. After a 4-of-4 start in the early minutes from long range, the Longhorns made just four their next 25 attempts.

Texas guard Matt Coleman III said the Longhorns guards must do a better job of feeding Sims the ball.

Oklahoma: The Sooners survived an off night from the free throw line. Oklahoma is the Big 12's best free throw-shooting team at 79% but were just 10 of 18 (55.6%) from the foul line. That opened the door for a potential late Texas rally but the Longhorns kept misfiring on 3-pointers.

Texas: Texas was undefeated on its home court until Wednesday. After winning last season's National Invitation Tournament, Texas is already facing a steep, uphill climb in the Big 12 after dropping a critical early home loss.

“It's tough losing at home. It doesn't sit right with me,” Coleman said.

Texas was in control late in the first half with a nine-point lead and the offense cruising behind Sims and the 3-pointers. That's when the offense stalled and the Sooners stormed back to take a 34-33 lead when Austin Reaves, a Wichita State transfer, made a turning, off-balance 3-pointer at the halftime buzzer.

“I've seen him make that in practice. I knew it was going in,” Oklahoma's Jamal Bieniemy said.

It was a particular moment of frustration for Smart.

“This is a game we were up 29-20 in the first half, really playing well, sharing the basketball," Smart said. "That’s a point of the game where you have to grab hold of it and take the game. We didn’t do that.”

Oklahoma is back on the road for a conference matchup at Iowa State on Saturday.

Texas stays at home in the Big 12 against Kansas State on Saturday.