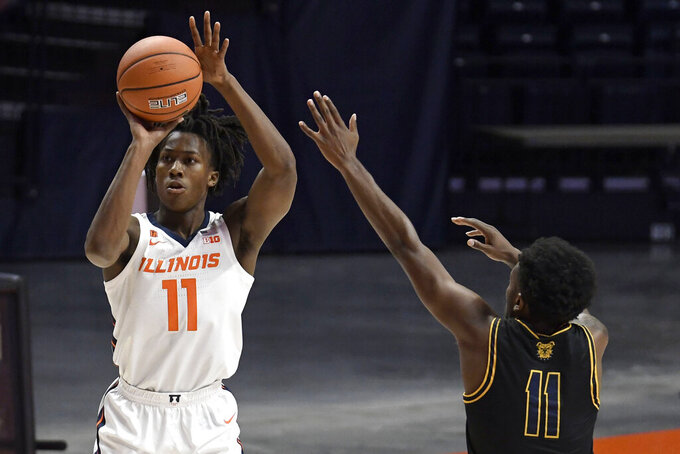 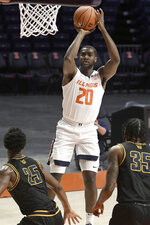 Miller shot 10 of 12 from the field, including 6 of 8 from 3-point range, as Illinois fell five points short of its record scoring total. Illinois hit 17 of 32 3-pointers, a program record.

“Our shooting is certainly better than a year ago,” Illinois coach Brad Underwood said. “Ayo and Adam are elite shooters from the outside. I think we’re going to be a pretty good shooting team this year.”

“This was a scrimmage for us,” Aggies coach Will Jones said. “We got to see how are guys can play. I saw some good things. Our guard play was good, I thought.”

Illinois’ guard play was better, especially in the first half.

Miller, a four-star recruit, scored 19 points on 5-of-6 shooting from 3-point range and Dosunmu had 14 points and six rebounds in the first half.

“Yeah, we have a chip on our shoulder,” Miller said. “We want more. We’re striving for greatness here.”

While Illinois coach Brad Underwood has said he wished his team was playing only a Big Ten Conference schedule because of COVID-19, the Aggies provided Underwood and his staff an early glimpse at how this talented Illinois team looks on the court.

“I’m just pleased we’re able to play this year,” Underwood said. “It’s thanks to a lot of hard work, not just in the league but by this program.”

Underwood was happy with the overall team effort.

“When teams load up defensively on Ayo and Kofi, it’s nice to have guys around who can pick up the slack,” he said. “Because in the open court, Ayo is one of the elite players in the country and he gets teams’ attention.”

While this three-day nonconference tournament serves mainly as an Illini tune-up for Big Ten play next month, a slip-up against a lesser opponent could cost No. 8 Illinois. If Wednesday’s performance was any indication, the Illini are taking these games seriously.

“We have a lot to prove this year,” Dosunmu said. “I think we were pretty successful today, and we got the win. Now we need to just build on this and come back tomorrow.”

North Carolina A&T: Plays Ohio in the second round of the three-day tournament on Thursday.

Illinois: Hosts Chicago State in the second round of the tournament on Thursday. The Cougars replaced Wright State, who withdrew on Friday due to COVID-19 concerns.