Dosunmu's return powers No. 4 Illinois over No. 7 Ohio State 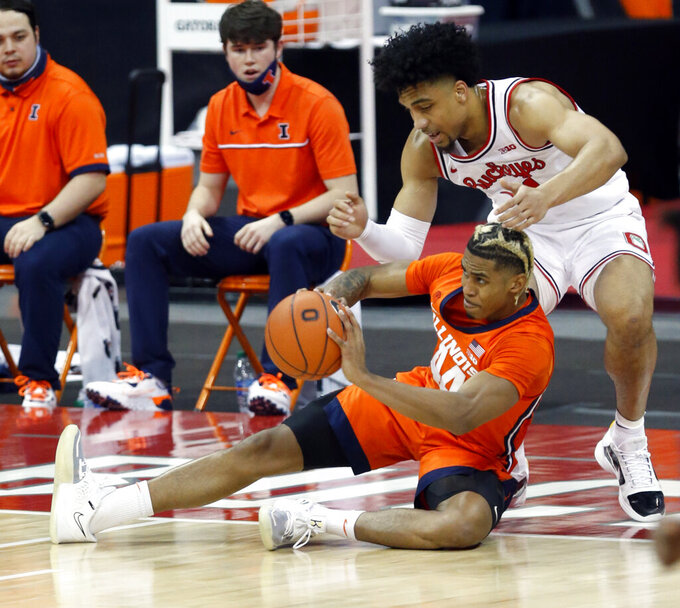 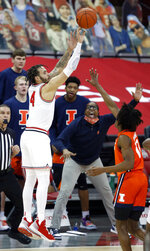 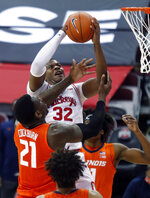 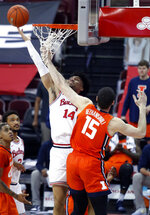 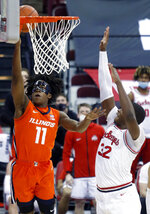 COLUMBUS, Ohio (AP) — After missing three games with a concussion and facial injuries, Illinois star Ayo Dosunmu returned Saturday wearing a protective mask he chose because it makes him look a little like a superhero.

Dosunmu played the part with a 19-point performance, and the No. 4 Illini rallied late to beat reeling No. 7 Ohio State 73-68.

“They gave me different options of masks to wear, and I thought this was the best mask for me,” he said of the protective covering over his broken nose and upper face. “I'm into comic books and stuff. I feel like a superhero with a black mask on.”

Andre Curbelo matched Dosunmu's 19, and Illinois (20-6, 16-4) got its second straight road win over a top 10 team after routing No. 2 Michigan on Tuesday. The Illini have won 11 of 12 and enter next week's Big Ten Tournament with a double-bye.

“What a week,” Illinois coach Brad Underwood said. “That's a tough, tough, tough group of guys in that locker room.”

When it looked like Ohio State might start to pull away late, the Buckeyes' shooting went cold. Illinois' Da'Monte Williams hit a 3-pointer to tie the game at 68 with 1:31 left.

Dosunmu's layup and three foul shots in the last 44 seconds provided the margin of victory as Ohio State failed to make another basket in the game. The Buckeyes missed their last 10 shots and didn't score in the final 3:48.

E.J. Liddell led the Buckeyes (18-8, 12-8) with 19 points, and Duane Washington Jr. and Justice Sueing each had 15 for Ohio State, which finished the regular season with four straight losses, three against Top 10 teams.

Illinois led by 10 during the first half but a late put-back by Liddell cut the advantage to 41-37 at the break. The teams traded punches in the second half with Ohio State up by four when Illinois mounted the final rally.

“We're in a good place,” Underwood said. “You want to go in (the Big Ten tournament) confident. You don't want to go in doubting yourself.”

Illinois is peaking at the right time and brimming with confidence after beating top 10 teams in back-to-back games for the first time since the 2005 NCAA Tournament. The Illini should move up to No. 3 in the AP poll. The Buckeyes showed an inability to finish in their most rigorous and disastrous stretch of the season.

“It's the Big Ten. Every game is a competitive game,” Dosunmu said. “Every game is a dogfight, every game is an NCAA Tournament game. But to win 11 of 12, we beat some very good teams. It just gives us more confidence. We know we can beat anyone in the country.”

Ohio State was ranked No. 4 and projected to be a No. 1 seed in the NCAA Tournament heading into the last week of February. They stayed at No. 4 after a loss to then No. 3 Michigan, but losses to Michigan State and then-No. 9 Iowa dropped them to No. 7. Another drop is likely.

CJ Walker and Young were recognized on Ohio State's senior day. Walker has already said he wants to move to pro basketball, but Young hasn't said yet whether he'll take advantage of the extra year of eligibility awarded by the NCAA to all players because of COVID-19. Young has played four years but has battled injuries for the last three. Walker is finishing his second season after transferring from Florida State. Both have graduated.