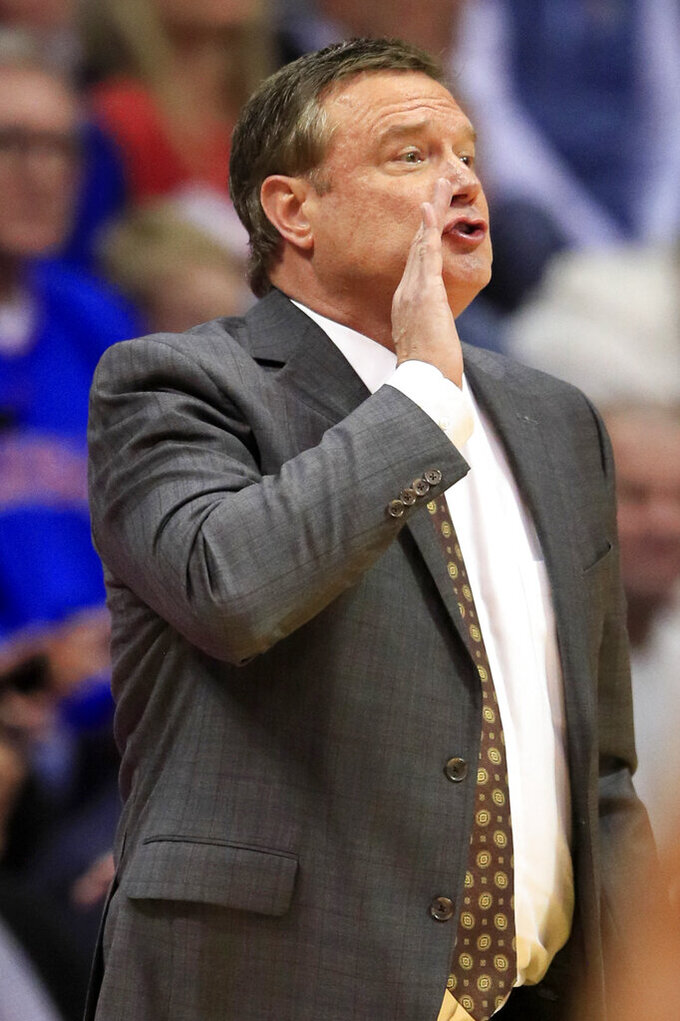 Kansas head coach Bill Self calls a play during the first half of an NCAA college basketball game against Iowa State in Lawrence, Kan., Monday, Feb. 17, 2020. (AP Photo/Orlin Wagner) 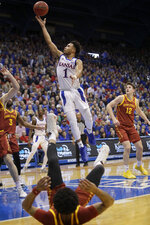 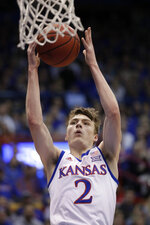 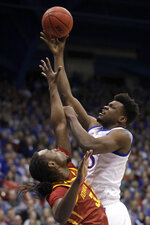 LAWRENCE, Kan. (AP) — Devon Dotson had watched Iowa State torch the nets in Allen Fieldhouse long enough, so the do-everything Kansas guard began raining down 3-pointers and getting to the rim in what started out as a one-man scoring showcase.

The rest of the third-ranked Jayhawks eventually followed his lead.

Dotson finished with six 3-pointers and 29 points, but he wound up being just one of five Kansas players in double-figures scoring, helping the Jayhawks to a 91-71 victory over the Cyclones on Monday night to keep pace in the Big 12 race.

“When they're hitting shots like they did, I mean, yeah, we've got to respond,” Dotson said. “I think every game we try to knock down our shots, but this game, people were rolling.”

Ochai Agbaji finished with 14 points, Udoka Azubuike and Christian Braun scored 13 apiece, and David McCormack had 10 points to send the Jayhawks (23-3, 12-1 Big 12) into a pivotal rematch with No. 1 Baylor with some serious momentum.

The Bears (23-1, 12-0) visit Oklahoma on Tuesday night before facing the Jayhawks at Ferrell Center on Saturday. Kansas hasn't lost since the two teams met at Allen Fieldhouse in mid-January.

“We have a couple days to get rested for obviously the biggest game of the year," Jayhawks coach Bill Self said.

Their frustrating season was summed up by the first half, when they did just about everything right and still trailed 50-40.

Iowa State was 9 of 12 from beyond the arc in a torrid display of shooting, and at one point connected on 3-pointers on three consecutive trips down floor. The Cyclones committed nine turnovers but generally held onto the ball well, and they also hung tough on the glass against a team with a massive advantage in both size and depth.

Maybe a little better defense would have helped.

As good as the Cyclones were on offense, the Jayhawks were even better. They kept pounding the ball inside to the 7-foot Azubuike, who dunked his way toward 10 first-half points, and that opened things up outside. Dotson had 15 points by the break, and Braun came off the bench to hit a trio of 3-pointers and score 13 points in just 12 minutes.

“The first half I thought offensively we gave ourselves a chance to be in the game," Cyclones coach Steve Prohm said. “You get 40 in a half at this place you'd think you're in pretty good shape.”

Iowa State tried to mount a comeback in the second half by getting the ball to Solomon Young, who spent most of the first half on the bench with two fouls. But the big forward was hounded every time he touched the ball and never seemed to get an open look, and that forced the Cyclones into launching up another barrage of 3-pointers.

They also slapped on a full-court press, but crisp passing and Dotson's smooth ball-handling easily broke it down.

The league's leading scorer snuffed out any chance of a comeback midway through the second half. Dotson knocked down a bucket, stripped Nixon near mid-court and took it to the rim for a three-point play, then curled in a 3-pointer from right in front of the Kansas bench to make it 78-55 with just over nine minutes to go.

“We put 40 minutes together we're really good,” Nixon said, “but when we play in spurts it's not in our favor. It showed in our performance tonight.”

Iowa State was playing its third game without starting guard Tyrese Haliburton, who is out the rest of the season with a fractured wrist. His absence was especially apparent against Dotson, who sliced up the Cyclones' backup guards all night.

Kansas rolled to its 800th win in Allen Fieldhouse, which will celebrate its 65th birthday on March 1. The Jayhawks have only lost 114 times in the building. Of those wins, 54 of them have come in 64 games against the Cyclones.

RAISING TO THE RAFTER

Marcus Morris had his No. 22 jersey added to the jerseys that hang over the south stands of the Phog during a halftime ceremony. Morris was a second-team All-American and Big 12 player of the year during his junior season in 2011 and, with twin brother Markieff Morris, helped the Jayhawks win three regular-season conference titles.

“This is a big honor for my family,” Marcus Morris said. “Coming from Philadelphia, never in our wildest dreams did we think this was possible. Even when we got here, I didn't think it was possible. When I look at the jersey going up there, it represents us both, because without ‘Kieff it would’t have been possible for me either. We accomplished a lot together.”

Kansas gets a couple extra days before its showdown with the Bears.