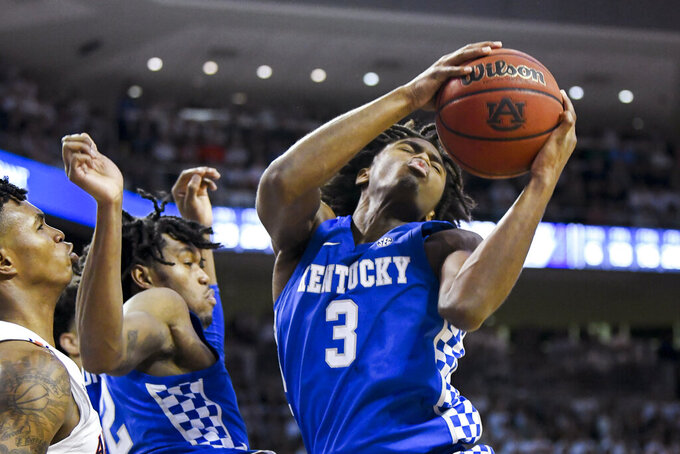 Kentucky guard Tyrese Maxey (3) snags a rebound from Auburn during the second half of an NCAA college basketball game Saturday, Feb. 1, 2020, in Auburn, Ala. (AP Photo/Julie Bennett)

AUBURN, Ala. (AP) — The Auburn Tigers took advantage of their first chance to prove themselves against a ranked opponent.

Samir Doughty scored 23 points while making 14 of 15 free throws and No. 17 Auburn finished strong in a 75-66 win over 13th-ranked Kentucky on Saturday in an NCAA Tournament rematch.

The win earned the Tigers an upgraded evaluation from their own coach after a nonconference schedule that left scant opportunities to prove their merits.

“It has to take us from good to very good," Auburn coach Bruce Pearl said. “Kentucky's the best team we've played, so I thought we stepped up and responded.

“I think we took a step from good to very good. Now the question is can we build on it?"

Isaac Okoro made a key 3-pointer and scored 14 points for the Tigers (19-2, 6-2 Southeastern Conference), who dominated the final four minutes after falling behind by seven early.

It wasn't nearly as big as the 77-71 overtime victory over the Wildcats (16-5, 6-2) that vaulted Auburn to its first Final Four last season, but it moved the Tigers into a tie for second place in the SEC.

The Tigers hadn't played a ranked team all season but face league leader No. 22 LSU next Saturday.

Auburn made 33 of 44 free throws and dominated the offensive boards, 17-6.

“I don’t know if that’s the most free throws taken against my team, but it might be," Wildcats coach John Calipari said. “But let me just tell you, they put their head down and they go. That’s what they do. We were trying to do the same thing but did not get the same result.

“The difference was the offensive rebounds."

Austin Wiley had 12 points and 10 rebounds for the Tigers, seven of them off the offensive glass. Danjel Purifoy had 11 points and half of Auburn's six 3-pointers.

Immanuel Quickley led Kentucky with 23 points before fouling out in the final minute, taking away the Wildcats' top 3-point shooter with point guard Ashton Hagans already on the bench with five fouls. Tyrese Maxey added 22 points as the duo combined for 68% of the Wildcats' points while stars Hagans and Nick Richards struggled.

“We felt like if Ashton and Richards had big games, they beat us," Pearl said.

Hagans fouled out on a steal attempt with 3:36 left and Auburn leading 62-60. He had five points — his second lowest total of the season — and three assists while committing six turnovers.

Richards had seven points, half his season average, and seven rebounds.

Auburn outscored foul-plagued Kentucky 16-6 down the stretch after trailing much of the way. Purifoy started that hot streak with a 3-pointer and Okoro buried another for a 68-62 lead with 2:36 left.

Kentucky didn't make a field goal over the final 2:15.

Auburn capped a drama-filled week after rallying from 19 points down in the second half for an 83-82 overtime win over Mississippi.

The disparity in the programs' history was amplified by ESPN College GameDay's airing from Auburn for the first time. It was Kentucky's 19th appearance on the show, second most among programs.

“They were struggling to stay in front at the beginning of the game," he said.