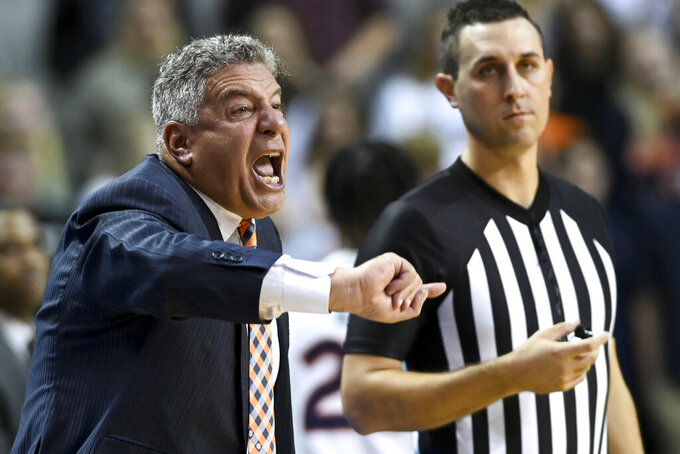 Auburn head coach Bruce Pearl reacts to a foul call during the first half of an NCAA college basketball game against Georgia Southern Tuesday, Nov. 5, 2019, in Auburn, Ala. (AP Photo/Julie Bennett) 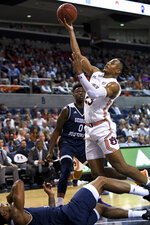 AUBURN, Ala. (AP) — The Auburn Tigers debuted their new look, minus the stars that led them to the program's first Final Four and also without the barrage of 3-pointers.

Samir Doughty scored 20 points to lead No. 24 Auburn to an 83-74 victory over Georgia Southern on Tuesday night in the opener for both teams.

The formula was different: Auburn made just seven 3-pointers. That's 11 fewer than their debut last season against South Alabama when the Tigers were on their way to setting the Southeastern Conference single-season mark.

"It wasn't pretty but we got the win," said Austin Wiley, who had 13 points and nine rebounds for Auburn. "We've got to do better at not turning the ball over and just rebounding the ball better."

The Tigers could never quite pull away from the Sun Belt Conference's Eagles. But Doughty made five of six free throws over the final 1:09 to avoid a late scare.

"They're a great ball club so we didn't expect to come in here and blow these guys out," Doughty said. "We know they're an older team, so we knew it was going to be a dog fight. We talked about that this whole week."

Auburn took a 61-48 lead eight minutes into the second half with Danjel Purifoy's 3-pointer punctuating a quick eight-point flurry.

Auburn had to replace those three stars from a team that fell to eventual champion Virginia in the Final Four. This one started four seniors and Okoro, the team's top new recruit.

Auburn took a 41-37 lead into halftime after freshman Devan Cambridge made back-to-back 3-pointers over the final 1:23.

"Bruce Pearl has built this program into a juggernaut," Georgia Southern coach Mark Byington said. "We knew we were coming into a tough environment. They have a very talented team.

"Our guys were excited to play and see where they were against a Top-25 team."

Georgia Southern: The Eagles are trying for another strong season after back-to-back 21-12 records but are replacing Sun Belt player of the year Tookie Brown. They were outrebounded 41-27.

Auburn: The Tigers were ranked in the preseason for just the sixth time and second straight season. They committed 21 turnovers, including a wave of them early. Auburn improved to 8-0 against Georgia Southern.

The four-star recruit was 6-of-9 shooting with five rebounds, and made one late shot while falling to the floor.

"We're going to use him a lot more than y'all think," Doughty said.

Georgia Southern announced before the game that senior forward Simeon Carter has been suspended indefinitely for violating team rules. Carter averaged 8.3 points and 4.4 rebounds per game last season, mostly off the bench.

Auburn held a moment of silence before the game to honor longtime broadcaster Rod Bramblett and his wife, Paula, who were killed in a car accident on May 25.

Auburn faces Davidson at the Veterans Classic in Annapolis, Maryland, on Friday.