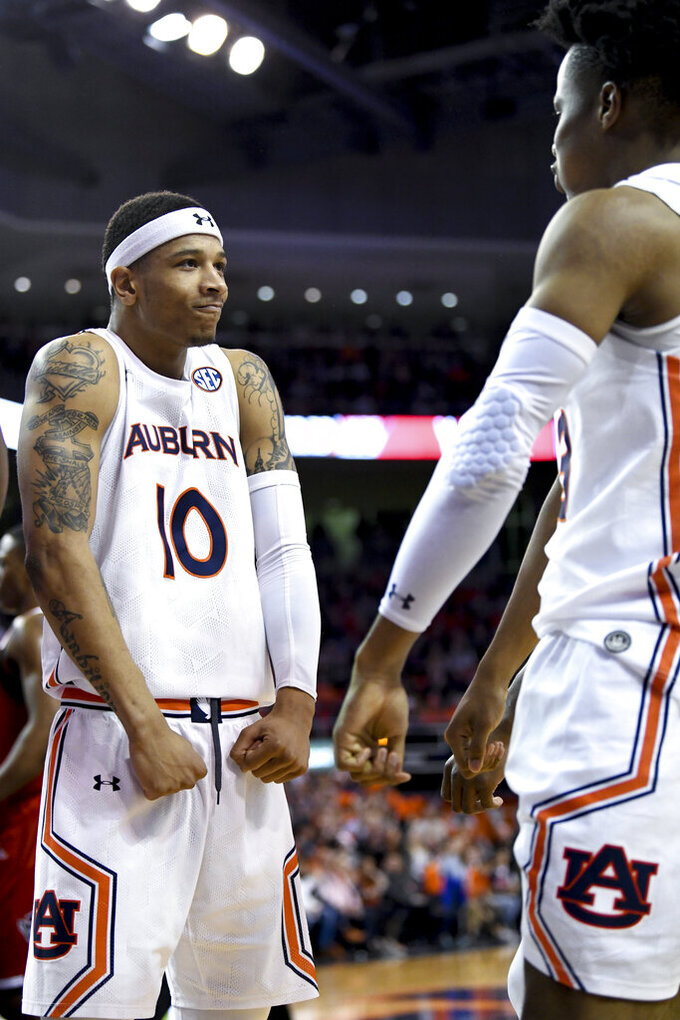 Auburn guard Samir Doughty (10) celebrates a basket with Auburn forward Isaac Okoro (23) during the second half of an NCAA college basketball game Thursday, Dec. 19, 2019, in Auburn, Ala. (AP Photo/Julie Bennett) 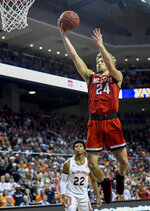 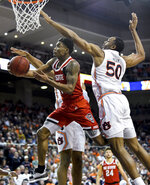 AUBURN, Ala. (AP) — The Auburn Tigers fell behind briefly late but didn't give up any more points until it was too late.

Samir Doughty scored 11 of his 24 points over the final 4:33 and No. 12 Auburn beat North Carolina State 79-73 Thursday night with a late defensive clampdown.

The Tigers (10-0) remained the only unbeaten Power Five team with perhaps their most notable win of the season. There was no 3-point barrage or offensive explosion like last year's team sometimes produced on its way to the Final Four.

“We’ve got to be a great defensive team to win games," Doughty said. “We aren't as good at scoring as we were last year, and we know that. We just try to focus on defending, winning our matchup."

The Wolfpack (8-3) briefly took a lead on Braxton Beverly's layup with 5:23 left but couldn't score again for the next four-plus minutes.

Doughty started a late 10-point surge with a scoop shot, but his biggest was a back-breaking 3-pointer from the corner to beat the shot clock with 25 seconds left.

“That wasn’t the play call but that was like a second option," Doughty said, “and it was a pretty good option."

He was perfect on six foul shots down the stretch.

Austin Wiley had a breakaway dunk during that run when Wolfpack players were slow to get back following a turnover.

“I didn't expect to be that open," Wiley said. “It seemed like everybody just stopped."

Doughty also turned the ball over and stole it right back, winning the scramble for a loose ball and calling a timeout from the floor to save possession.

Markell Johnson broke the North Carolina State drought with a short jumper with 1:21 left. After Doughty made two more foul shots, Pat Andree cut the Wolfpack's deficit to 74-69 with a 3-pointer with 55 seconds to play.

“Auburn basketball’s not going to be as pretty this year, and I don’t know whether it will be as successful or effective," Tigers coach Bruce Pearl said. “But I do know that we’ve got some very strong pieces."

McCormick had 14 points for Auburn and Austin Wiley added 10 points and eight rebounds.

C.J. Bryce had 21 points and 11 rebounds to lead North Carolina State before fouling out with 1:38 left. Johnson added 17 points, 10 assists and six rebounds.

Johnson made a buzzer beater from midcourt Sunday to beat UNC-Greensboro 80-77 but didn't get a chance for more heroics this time.

The Wolfpack won last year's meeting by a similar score, 78-71.

“I was excited by the way we played," North Carolina State coach Kevin Keatts said. “It was a one-possession game that could have went either way. Last year it went our way."

Auburn built a double-digit lead with 12 straight points in the first half. North Carolina State then answered with a 17-2 run for a 33-28 lead.

Officials called three technical fouls. Bryce and Auburn's Allen Flanigan drew double technicals with 14:35 left and Johnson was whistled for another not long after.

“I didn’t say anything to him at all,” Bryce said of Flanigan. “It was getting a little chippy there, so I feel like they just wanted to keep guys in check. I understand it, but it was a foul that I really didn’t want to pick up.”