Ducks long shots in seed only as powerhouses start Sweet 16 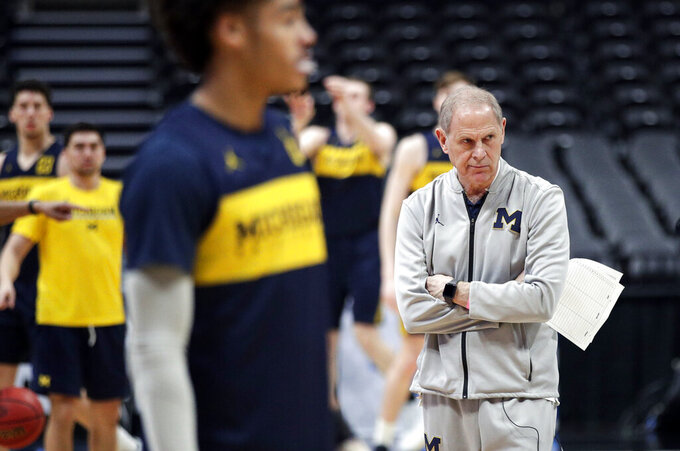 The closest thing to a long shot left in the NCAA Tournament is in the Sweet 16 for the third time in four years, made the Final Four a couple years ago and is led by a coach with almost 650 wins who has guided three programs to the dance.

Next up for No. 12 seed Oregon: Virginia.

The second weekend of the tournament gets going Thursday night, when the Ducks conclude a quartet of regional semifinal games against the No. 1 seed Cavaliers in the South Region. No. 2 seed Tennessee faces third-seeded Purdue in the other matchup in Louisville, Kentucky, while Gonzaga-Florida State and Texas Tech-Michigan decide the finalists in the West Region in Anaheim, California.

The only team among them seeded outside the top four? Dana Altman's squad from Eugene, Oregon.

For good reason, the way the Ducks have played in March the past few years. But the Ducks (25-12) were also a mess in January, trying to adjust to playing without star big man Bol Bol, who was lost for the season due to injury. It wasn't until Altman tinkered with his lineups and started four 6-foot-9 forwards that the season turned, and only the past six weeks have the Ducks looked like Final Four contenders again.

The Ducks rolled to a Pac-12 Tournament title, breezed past the Badgers in the opening round of the tournament, then routed the Anteaters — the team that upset fourth-seeded Kansas State.

"I've only seen Oregon once in the Pac-12 Championship. They beat Washington pretty good, and I know they're hot," the Cavaliers' Ty Jerome said. "I know they're tall across the board. They have a really good point guard and a lot of guys that can make shots. I know they're playing really good defense as of late, too. It will be a good challenge for us."

The Cavaliers confronted their biggest fear in the opening round when, after losing to No. 16 seed UMBC last season, they struggled for a while against Gardner-Webb. But after finding their stride, coach Tony Bennett's crew looked much better in a second-round win over Oklahoma.

Now, the Cavaliers (31-3) are eager to make the late-March run they expected last year.

"Everybody is playing well to advance to this point," Bennett said. "I think us, having to overcome a shaky start against a very good Gardner-Webb team and facing that and showing some resiliency, I hope the way we had to play to advance and then against Oklahoma will carry over. You're going to need that again to continue to advance."

As the regional semifinals get underway Thursday, here are some other things to know:

FAMILIAR FOES: The Vols (31-5) and Boilermakers (25-9) met in the Battle 4 Atlantis in November 2017, which means there is some familiarity between the programs. Tennessee returned most of the team that beat Purdue 78-75 in overtime, though coach Matt Painter's bunch has a few new faces.

"Last year that was a vital game for us, and we came in with a competitive mentality of going out there and winning. Getting that win was important for us and it helped us during that season," the Vols' Grant Williams said. "But it's a whole new team, a whole new year. We have to come prepared for the team that we're playing Thursday night."

HEAVY HEARTS: The Seminoles (29-7) will be without senior Phil Cofer when they face the Bulldogs (32-3) at Honda Center. Cofer learned after Florida State's first-round win over Vermont that his dad, former NFL player Mike Cofer, had died after a long illness. The funeral is Saturday in Georgia.

"People from all walks of life, you go through this from time to time," Florida State coach Leonard Hamilton said, "but not during a tournament like this. Life sometimes gives you those types of curve balls that you've just got to learn how to adjust and deal with the best you can."

TALE OF TWO PROGRAMS: Michigan (30-6) has been to two Final Fours in the past six years , and lost in the title game a season ago. Texas Tech (28-6) had never been to back-to-back Sweet 16s until this season, when a retooled team led by star guard Jarrett Culver finally accomplished the feat.

Two very different programs? Perhaps not so much.

"When I think of Michigan, I think of discipline. They don't beat themselves," Red Raiders coach Chris Beard said. "It's hard to get baskets against them because of their scheme, their discipline, their athletic size. I would hope when people talk about Texas Tech, they realize we try to make it hard for the opponent to score and we value the ball and try to get shots as well."

LOOKING AHEAD: No. 1 seed Duke plays fourth-seeded Virginia Tech on Friday night in Washington, D.C., where second-seeded Michigan State and No. 3 seed LSU also meet in the East Region. Top-seeded North Carolina faces No. 5 seed Auburn in Kansas City, Missouri, while second-seeded Kentucky faces No. 3 seed Houston in the other Midwest Region semifinal.