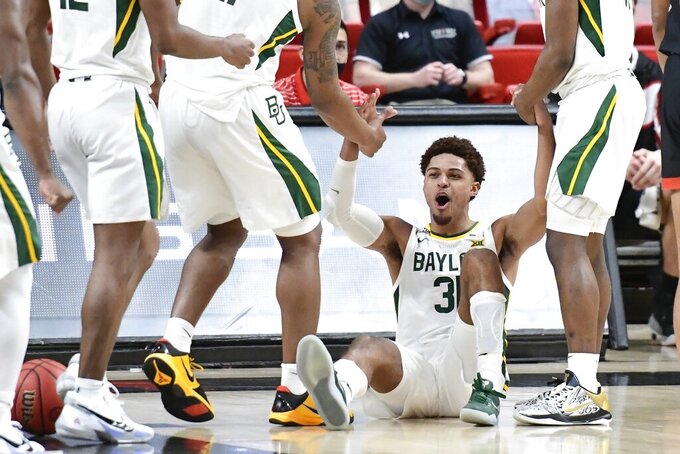 Baylor's MaCio Teague (31) is helped up by his teammates after drawing a foul against Texas Tech during the second half of an NCAA college basketball game in Lubbock, Texas, Saturday, Jan. 16, 2021. (AP Photo/Justin Rex) 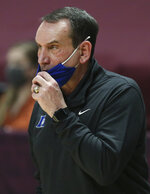 Gonzaga and Baylor maintained their grip on the top two spots in The Associated Press men's basketball poll Monday.

If third-ranked Villanova ever plays a game, perhaps it will make a run a them.

The Bulldogs again racked up all but the two first-place votes that went to the Bears, while the Wildcats remained firmly behind the preseason top two despite not playing a game since Dec. 23. They had a pair of COVID-19 pauses broken up by a single day, including one involving coach Jay Wright, effectively sidelining them for a month.

“Everyone has dealt with this,” said Wright, whose team finally gets back on the court Tuesday night against Seton Hall. “It’s not just the days you are out. It’s getting the guys going after a pause.”

The same teams made up the top 5 this week, though Iowa and Texas swapped places. Luka Garza and the Hawkeyes moved into fourth after ripping Northwestern by 23 points on the road Sunday, while the Longhorns fell back a spot after their six-game winning streak was stopped by No. 12 Texas Tech in a narrow defeat earlier in the week.

“Obviously the loss on Wednesday was devastating and really, really disappointing for our team and staff,” said Texas coach Shaka Smart, whose bunch rebounded to beat Kansas State on the road Saturday. “We knew we had to turn the page. The guys were really mature with their approach on Thursday in practice and their film session Friday.”

Texas doesn’t play again until Saturday after its game against Iowa State was postponed.

Tennessee climbed from 10th to sixth and was followed by Michigan, which remained No. 7 after losing its first game of the season to No. 17 Minnesota. Houston climbed three spots to eighth, Kansas fell three spots to ninth and Wisconsin rounded out the top 10 after following up a lopsided loss to the Wolverines with a gritty win at Rutgers.

Creighton was No. 11, followed by the Red Raiders and Virginia, which rose five spots after its blowout win over No. 20 Clemson. West Virginia and Ohio State were next, with Virginia Tech climbing four spots to No. 16 on the heels of a win over Duke, which knocked the Blue Devils from the Top 25 for the first time since Feb. 8, 2016.

The Golden Gophers were followed by Auburn, one of this week's poll newcomers, Missouri and Clemson. The last five in were Oregon, Illinois, Connecticut, UCLA and Saint Louis.

Duke dropped to 5-3 overall and 3-1 in the ACC after losing to the Hokies last week. Their streak of 91 consecutive weeks in the Top 25 was second only to Kansas, which extended its record to 229 weeks. Gonzaga is now No. 2 at 87 weeks.

“We’re still finding out about our team,” said coach Mike Krzyzewski, whose team nearly rallied from an 18-point deficit against Virginia Tech. “We had not played in an ACC game like that. ... You don’t get better without experience.”

The Crimson Tide shot from unranked to No. 18 after improving to 6-0 in the SEC with its seventh consecutive win. The streak, which includes a victory over Tennessee, has coincided with a recharged John Petty Jr. The senior guard returned from a one-game suspension to average 15.7 points over the past six games, including 23 points in a 20-point blowout of Kentucky.

“You like for guys who decide to come back for their senior year to do great things,” Alabama coach Nate Oats said. “Us being 6-0 and being in first place and (Petty) breaking the school record for 3s made — hopefully, he can play his way into first-round draft pick status and have a great senior year and get this program to where they envisioned it."

The Bruins were the other newcomer to this week's poll after improving to 11-2 and 7-0 in the Pac-12 with consecutive wins over Washington State and Washington. Alabama and UCLA replaced Duke and Louisville, which was first among the other teams receiving votes after the Cardinals lost their first ACC game at Miami.