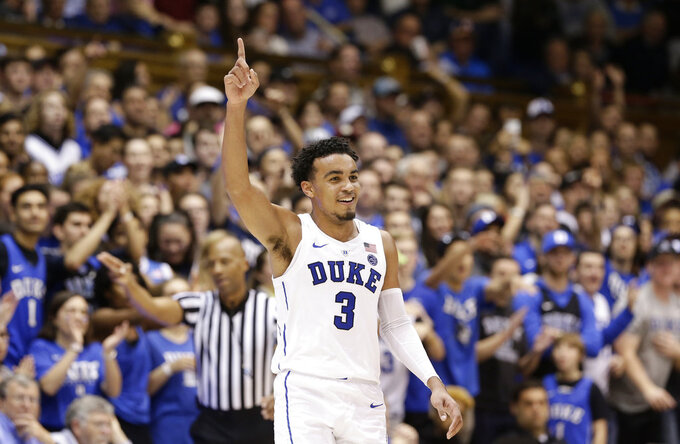 FILE - In this Dec. 1, 2018, file photo, Duke's Tre Jones (3) reacts after a basket against Stetson during the second half of an NCAA college basketball game in Durham, N.C. Duke hopes it hasn't lost any of the momentum that carried it back to No. 1. The Blue Devils' 15-day layoff ends this weekend with a visit from Clemson in the ACC opener. (AP Photo/Gerry Broome, File)

DURHAM, N.C. (AP) — Duke's talented freshmen haven't waited this long to play a game since they spent all summer looking forward to making their college debuts.

That break turned out well for them — Duke 118, Kentucky 84 — and now the No. 1-ranked Blue Devils are looking for similar results when they return to the court after their 15-day break between games.

"We all kind of had withdrawal from being together as a group," team captain Jack White said Friday.

Well, Zion Williamson, RJ Barrett and the other ballyhooed Duke freshmen get to check off another first — their Atlantic Coast Conference opener against visiting Clemson on Saturday night in the Blue Devils' first game since reclaiming the top ranking.

They feel a nonconference schedule that included neutral-site wins over the then-second-ranked Wildcats and No. 12 Texas Tech — plus a tight loss to No. 3 Gonzaga — prepared them for the rigor of a conference that has four teams in the top 10 and two more in the Top 25. That total doesn't include Clemson, which began the season ranked but dropped out while losing three of four a month ago.

"Our record's 0-0 again," point guard Tre Jones said. "None of these games in the past have really meant anything to these ACC games. The ACC's a different beast."

A lot has happened since the Blue Devils beat Texas Tech 69-58 on Dec. 20 at Madison Square Garden. While they broke for a week for the holidays, they ascended back to No. 1 after Kansas fell from the top spot. They returned to campus on Dec. 28 and spent the past week on the practice court.

"We don't feel rust at all," Jones said.

They better hope not. Recently, the beginning of conference play has been a harsh wake-up call to Duke — which hasn't won its ACC opener since the 2015-16 season.

Last year's group led by Marvin Bagley III and Wendell Carter Jr. lost its ACC opener and opened league play 1-2 before getting back on track. And the 2014-15 team led by eventual first-round picks Jahlil Okafor and Tre Jones' older brother Tyus dropped two of its first four ACC games before rebounding to claim the school's fifth and most recent national championship.

"It's a little bit different in terms of, the quality of teams we play every (conference) game are top-notch," White said. "It's just a different level in the ACC. ... I think they'll be ready for that rigorous schedule, going back to class, and then balancing the travel and playing and everything like that."

White, a junior who has seen two other one-and-done classes pass through Cameron Indoor Stadium, says the current group has shown "maturity and togetherness and toughness" that's particularly uncommon, and those qualities should help them handle the two-month grind of conference play perhaps better than its predecessors.

"There's a lot of attention brought to us freshmen, for sure, but as far as the team goes, it's a credit for sure to our captains. ... They've made it seem like none of us are a class," Jones said. "We're all the same across the board. ... Our main objective is to win, no matter who gets the attention."