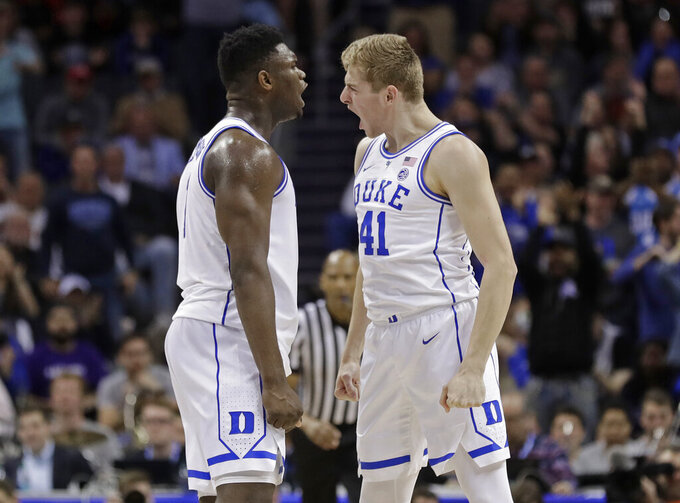 Duke's Zion Williamson, left, celebrates with Jack White, right, after a play against Florida State during the second half of the NCAA college basketball championship game of the Atlantic Coast Conference tournament in Charlotte, N.C., Saturday, March 16, 2019. (AP Photo/Nell Redmond) 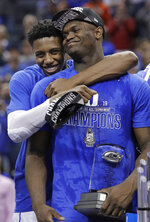 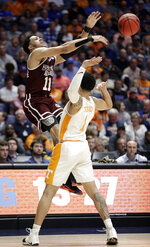 COLUMBIA, S.C. (AP) — All eyes are on Duke's Zion Williamson at the NCAA Tournament — much as they've been throughout his remarkable freshman season.

Williamson and the top-seeded Blue Devils (29-5) start play in the East Region on Friday against Summit League champs North Dakota State (19-15), the 16th seed. The contest is among four to finish opening-round play in the East.

But nobody draws as much buzz as Williamson and the dynamic Blue Devils.

Fans filled the lower bowl of Colonial Life Arena on Thursday, camera phones out for a glimpse at Williamson's every magical move. Several times they erupted in cheers when Williamson gracefully launched his 6-foot-7. 285-pound frame in the air to throw down a powerful dunk.

He's been analyzed, scrutinized and applauded with many wondering how a man so large and powerful can be so agile and quick.

"It's been good for basketball, good for Duke and fun for Zion. It's a credit to him as a young guy that he's just been able to deliver," said former Duke star Grant Hill.

Williamson just smiles at it all, well counseled by his family on handling the attention that was sure to follow him to college hoops.

"I was prepared for it," Williamson said. "I'm very excited to be here because I watched March Madness as a little kid and to actually be here playing for Coach K (Mike Krzyzewski), playing for Duke, I couldn't ask for a better situation."

The Blue Devils are far from a one-man show, even if it seems that way at times.

Fellow freshmen R.J. Barrett, Cam Reddish and Tre Jones have forged a brotherhood this season that has carried Duke to No. 1 in the country, Krzyzewski said.

Duke is coming off its 21st ACC Tournament title, powered largely by the return of Williamson who had missed six games after his sneaker blowout against North Carolina on Feb. 20. Williamson said he always planned to come back, despite outside voices saying he should skip the rest of the season to protect his likely status as the No. 1 pick in the next NBA draft.

Krzyzewski said he told Williamson to sit out if he had any reservations. Williamson wouldn't hear it.

"I feel like I would have been a bad person if I didn't come back," he said.

North Dakota State advanced with a First Four over North Carolina Central on Wednesday night. Bison coach David Richman said he saw some deer-in-the-headlight moments in that game with a team that had not played in the NCAAs in four years and has no seniors.

"I was thinking about it and they don't have any seniors, either," Richman joked.

Richman said his team won't change its focus simply to slow down Williamson, relying on its balanced scoring and defensive pressure.

"Ready or not, here it comes," Richman said.

TALL TALE: Eighth seeded VCU is charged with slowing down the tallest player in Division I, 7-6 Tacko Fall of No. 9 seed UCF. Fall, a senior, has averaged 10.9 points and a team-best 7.3 rebounds to help the Knights make it to the NCAAs for the first time in 14 years.

"I wish we could say we got up on a chair with some broomsticks, but you can't really move very well that way," VCU coach Mike Rhoades said.

BUILDING JOB: When coach Ben Howland took over at Mississippi State in 2015, he had a tough task ahead if he planned to take a fourth school to the NCAA Tournament.

The Bulldogs had a 37-60 record the previous three years under Rick Ray before Howland slowly built them back into a winner, leading to Mississippi State earning its first tournament berth since 2009.

Howland took Northern Arizona, Pittsburgh and UCLA to the tournament and had three straight Final Four trips with the Bruins from 2006-08.

Howland was glad to be able to make it back to the tournament before two of his original recruits, guard Quinndary Weatherspoon and forward Aric Holman finished their careers.

"They deserve it," he said. "That was something we really had our heart and focus set on going into this season as we ended last year."

Liberty got to the tournament by beating Lipscomb to win the Atlantic Sun in its first year in the conference. The Flames last got this far in 2013 and are seeking their first tournament win after losing in the opener three times.

CLEARED TO PLAY: No. 4 seed Virginia Tech (24-8) got some good news heading into the tournament when senior point guard Justin Robinson was cleared to return from a left foot injury in time for the first-round game against 13th seeded Saint Louis (23-12).

Robinson, the school's all-time assists leader, missed the past 12 games for the Hokies. Teammate Ty Outlaw said incorporating Robinson back into the team will be like "riding a bike."

"With him it's going to be even better," Outlaw said. "Things I might have struggled with when I was playing with him, I'm better at now."

Virginia Tech went 7-5 in Robinson's absence, including four defeats against ranked teams. The Hokies did manage to beat No. 1 overall seed Duke last month at home even without their floor leader.

Now they are hoping for their first NCAA Tournament win since 2007 after losing in the first round the past two seasons.

"We learned from the past two years of being kicked out in the first round, and hopefully we can build off of those two years and make a run at it," Robinson said.

The Billikens made it here after winning four games in four days to take the Atlantic 10 title.